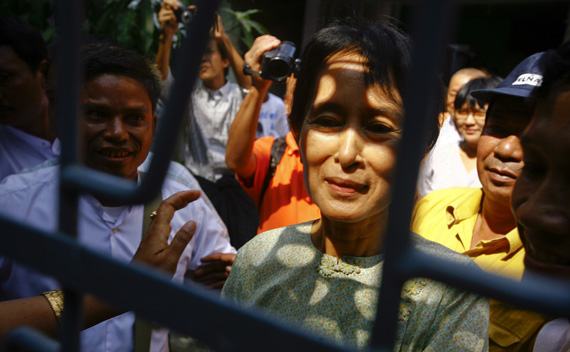 With Aung San Suu Kyi now out of house arrest and promising to travel through Burma to meet people and resuscitate her political party, her decision raises the question of whether her stint of freedom is going to end in disaster again. And, if it is, what precautions can she and her supporters take?

In its Banyan column this week, The Economist, like other outlets, theorizes that the junta will likely only allow Suu Kyi a bit of freedom before locking her up again – or worse. The Irrawaddy, in a new interview with the democracy icon, actually poses this question to her, asking her whether she has been just put into a larger prison, rather than house arrest.  After all, the last time Suu Kyi was let out by the junta, hardliners in the regime allegedly orchestrated a massacre of her supporters on a rural road. She herself survived only because of the sharp thinking and skillful maneuvering of her driver.

Since that massacre in 2003, the hardliners who allegedly organized it have only risen higher in the military, while the military “moderates” (always a dubious term in Myanmar), who allegedly want a softer line toward Suu Kyi, have been pushed out and, in many cases, jailed by Senior General Than Shwe. So, it would seem that, once Suu Kyi again shows her enormous popularity with average people, the junta will take action again. Already this week there have been several bomb attacks in Mandalay, the city where Suu Kyi is rumored to travel to next.

Last time, in 2003, Suu Kyi’s supporters seemed taken unaware by the ferocity of the junta’s attack on them. This time, how will they protect their leader, while sticking to her vow of nonviolence?

What China Says about the United States

Can Trump’s Successor Save the Liberal International Order?