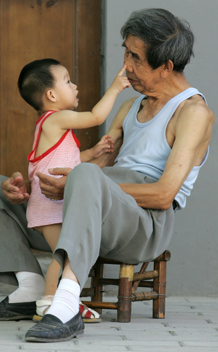 Something is afoot with China’s one-child policy, but no-one seems entirely sure what might be changing and when (see here and here). Everyone agrees that the policy has been "successful" in its original intent, by official account reducing China’s anticipated population over the past almost three decades by 400 million. At the same time, everyone also agrees that the policy has resulted in excesses that must be addressed sooner rather than later.

Chinese officials appear most concerned about the ageing of the population. They face two separate challenges here. First, by 2050, China will have more than 438 million people over the age of 60, roughly 25 percent of the country’s total population. China’s leaders are desperately concerned about maintaining a strong and active labor force to ensure continued economic growth. Of course, people over 60 can continue to lead productive lives, working well into their seventies or even eighties, but China will need to improve its health care system to ensure their health care needs are met in the process.

Second, the skewed age demographic has brought about the "Four-two-one" problem, in which one child is responsible for caring for two parents and four grandparents, has been actively discussed for well over a decade. With a dearth of facilities to help care for the elderly, there is no doubt that the burden will be great on these only children, and recent polls suggest that many do not feel prepared to shoulder such a burden—even simply to take care of their parents, much less their grandparents.

The gender imbalance has also increased with selective abortion producing many more boys than girls—in 2005, there were 119 boys for every 100 girls. Individual provinces have reported rates as high as 130 to 100. Sociologists have pointed to increased prostitution and illegal trafficking of women as one result. Some even worry that too many men without wives or girlfriends will lead to greater violence within the country.

And then, of course, there is the problem of an entire country soon to be made up of only children or "little emperors," who have been spoiled, over-protected and generally the focus of entirely too much adult attention for most of their lives. What this means for society as a whole has yet to play out fully, but no one seems to anticipate that it will produce a healthier society than one rooted in a broader range of family dynamics.

Into this mix comes an apparent policy reform—to allow couples in which one of them is an only child to have two children. Already two only children who marry are permitted to have two children. Given that by now more than 50 percent of women of child-bearing age are probably only children, this reform is a meaningful one. The policy would begin next year as a test in five provinces spreading gradually throughout the country. While some analysts predict that many Chinese couples will elect to have only one child even with this change, my prediction is that many more will have two. In either case, the choice will no doubt be welcomed by many Chinese.