Many argue that sovereign wealth funds have been a stabilizing force in global markets.

I keep wondering how anyone could possibly know.

The majority of sovereign funds do not report data on the composition of their portfolios. The increase in their funds over the past couple of years under management doesn’t seem to have made the world a more stable place -- though you can argue it would be even more unstable absent their stabilizing presence. As far as I know, no one truly knows if sovereign funds have been piling into Treasury bills, European government bonds, bank deposits (if you can find a safe bank for big deposits) and money market funds along with everyone else -- or if they have been buying US and European equities as they slide. I rather doubt sovereign funds have been buying a lot of toxic subprime debt off banks balance sheets. By contrast, we do know that the Chinese state banks, which are effectively playing with the dollars they received from the CIC as a result of their recapitalization,* have been reducing their holdings of risky US debt - -and perhaps otherwise reducing their exposure to the global financial system. We certainly don’t know if sovereign funds are going to start to pull funds from leveraged investors with poor recent returns -- contributing to the "run" on hedge funds that Nouriel Roubini and others now fear -- or if they are going to keep putting money into the hands of leveraged players.

But sovereign funds aren’t the real story. Central banks remains far more important. Unfortunately, we also know less and less about how central banks are impacting the markets through their reserve growth. There will be lots of analysis about the (small) fall in the dollar’s share of reported reserves in today’s COFER data release. Ignore most of it. There is a bit of data suggesting that those emerging economies that report data to the IMF started to diversify away from the dollar in q2 (but only after propping the dollar up in q1). But that doesn’t actually tell us much. Right now, the majority of global reserve growth now comes from countries that do not report data to the IMF -- so we frankly simply do not know if the actions of those countries that do report data to the IMF are representative or not. Consider the following chart. 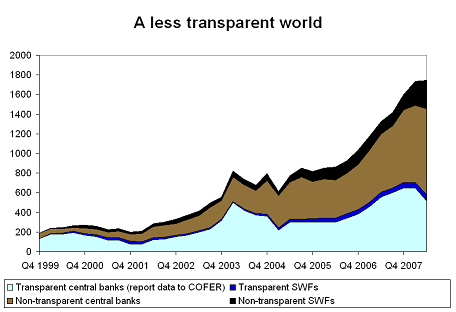 Here are a few numbers.

In q2, countries that do not report data to the IMF accounted for $82 billion of the $126b increase in global reserves. That actually understates the size of the "dark" central bank flows. The "other foreign assets" (think bank dollar reserves) of the People’s Bank of China increased by $74.5b, and the "non-reserve foreign assets" of the Saudi Monetary Agency increased by $29b. That brings total "dark" foreign asset growth to around $185b -- and the total increase in global reserves to around $230 billion.

Between 60% and 80% of that likely went into dollars (I think countries that do not report data generally have a higher dollar share of their reserves than their more transparent cousins) -- so "dark" dollar flows likely added between $110 and $148b to global dollar reserve growth. My baseline estimate is around $130b -- which would bring total dollar reserve growth to around $143b in q1.

The same basic story holds for the last four quarters. Countries that do not report data accounted for $594b of global reserve growth. Add $203b from the PBoC’s non-reserve foreign assets and $130b from SAMA to that total, and total "dark" reserve growth reached $927b. If between 60 and 80% of that went into dollar assets, "dark" dollar flows were likely between $556 and $741 billion. Add those sums to the known $343b increase in dollar reserves from reporting central banks and total global dollar reserve growth over the last four quarters was between $900b and $1080b.

My baseline -- which assumes a fairly constant 67% dollar share among central banks that do not report data to the IMF -- would suggest $976b of dollar reserve growth over the last four quarters -- and $1339 billion in overall reserve growth. That implies $363b of non-dollar flows -- and that dollar flows accounted for 73% of new reserve growth.

My global total includes the Saudis non-reserve foreign assets managed by SAMA and the PBoC’s other foreign assets (think bank reserve requirement) but excludes the increase in the foreign assets of the China investment corporation and the "oil" sovereign funds. But even a sum that leaves the sovereign funds out suggests that official purchases of dollars easily exceeded the US current account deficit. The buildup of central bank dollar reserves -- on the assumption that most of those dollar reserves are ultimately claims on the US, not dollar-denominated Costa Rican bonds -- actually came close to financing both the US current account deficit and the net outflow of long-term private capital from the United States. 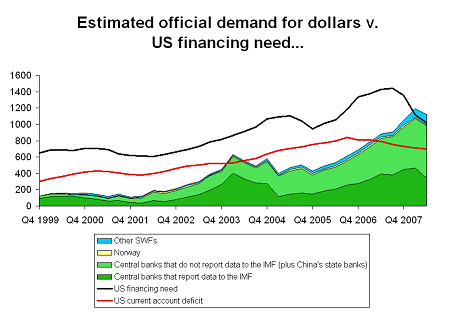 I am quite confident that if we had good data, the scale of the growth in central banks dollar holdings over the past four quarters would be stunning. My estimates may be off -- but they error isn’t likely to be more than about $100 billion.

But looking backward though only takes you so far.

There is little doubt that global reserve growth slowed in the second quarter. I have more confidence in my estimate for total reserve growth (counting the non-reserve foreign assets of the PBoC and SAMA) than I do in the split between dollars and other currencies. 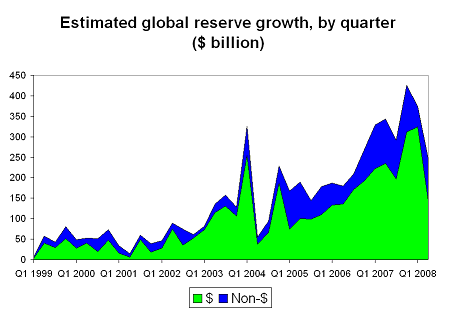 I would guess that global reserve slowed further in q3. We know that most Asian emerging economies -- setting China aside -- saw their reserves fall this quarter. Russian reserve growth also slowed. And we should have a reasonable estimate of Chinese reserve growth fairly soon -- and Saudi reserve growth in about a month.

Paul Krugman is right. If the US eventually passes some form of bailout, it won’t be financed by money borrowed form China. Not really. The US will still be borrowing a lot of money from China, to be sure. But the amount it borrows from China isn’t likely to go up because of a bailout. For the first time in a long-time, private investors want to hold Treasuries despite their low yields.

The strong global reserve growth of the past four quarters reflected three things:

-- The large current account surplus of the oil exporters, as oil export revenues rose faster than domestic spending and investment. Here I would note the simultaneous presence of a large surplus in China (and Japan) and in the oil exporters explains why the deficits in the US and increasingly Europe were so large.

In the second quarter, those capital flows largely dried up -- setting hot money inflows into China and Russia aside. In the third quarter, those flows probably reversed -- and hot money flows to China likely slowed. Right now, global capital flows have been marked by a broad based flight from risk -- not just net outflows from the growing growing US to the (formerly) fast growing emerging world.

Oil prices also fell off their summer peaks. With a lag, that will bring down the oil exporters surplus.

Lower oil prices would tend to increase China’s surplus, and indeed the aggregate surplus of all emerging Asia. But with US and European demand for Chinese exports falling, I would guess that the rise in China’s surplus won’t offset the fall in the oil exporters surplus.

In other words, the emerging world’s combined surplus should fall a bit, as will the combined deficit of the US and Europe.

That implies that the US will be relying less on Chinese (and Gulf) financing -- in a flow sense -- than in the past.

Don’t get me wrong though: those flows still matter. Right now there aren’t many others willing to add to their dollar holdings. Absent these -- more modest -- flows, the US wouldn’t be able sustain any deficit. The United States still needs financing from other governments. It just will need a bit less than it did when the deficit was larger and private money was flowing into the emerging world.

What could bring global dollar reserve growth back up to its peak even as the US external deficit falls? A broad loss of confidence in the dollar, and big net outflows from the US to the emerging world ...

* The initial recapitalization was done with PBoC reserves. The CIC in effect bought the equity the PBoC received in return with some of the funds it raised, leaving the foreign exchange in the hands of the state banks. It also injected $20 billion of foreign exchange into the China Development Bank in return for CDB equity.

A new reason to be bullish on America: It is (almost) Sweden