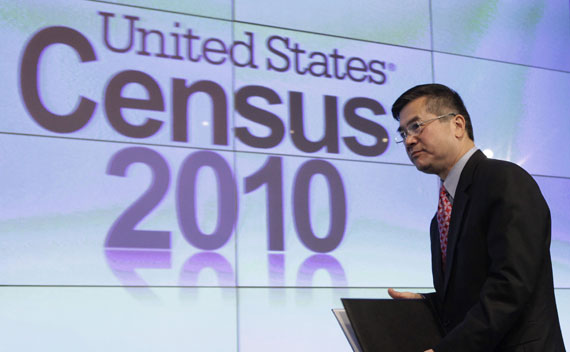 The Census Bureau released the top-line results of the decennial census yesterday.  The main message is unsurprising.  There are more of us, we are older, we look less like the people who stepped off the Mayflower,  and we are less likely to live in the Northeast and the upper Midwest.  What those trends mean for American politics are the grist for a good debate.

The New York Times, the Washington Post, and the Wall Street Journal all have good front-page stories on the census results with nifty graphics.  Most of the focus understandably is on what the census means for the House of Representatives. The big winners are Texas, with four additional seats, and Florida with two.  Arizona, Georgia, South Carolina, Washington, Utah, and Nevada each gain one seat.

The big losers are New York and Ohio, both of which lose two seats.  Iowa, Illinois, Missouri, Pennsylvania, Louisiana, Massachusetts, Michigan, and New Jersey all lose one seat.

Again, the shift of political power from the north and east to the south and west is not new. That has been the trend since the founding of the Republic.  One way to capture that trend is with the concept of the country’s mean center of population—the point on an imaginary flat map of the United States where the country would balance. In 1790, that point lay twenty-three miles to the east of Baltimore. In 1900, it was in Bartholomew County, Indiana. Today it lies in Texas County, Missouri, roughly 150 miles southwest of St. Louis. (Texas County is larger than the entire state of Rhode Island, its county seat is Houston, and it hosts the Texas County Fair and Old Settlers Reunion every July.)

Another way to look at the shift of political power is to examine who has how many seats in Congress. In 1910, New York had forty-three seats, Massachusetts had sixteen, and Iowa had eleven. By contrast, Texas had eighteen, Florida had four, and Arizona had one.

Republicans are cheering the census results for two reasons. First, the states gaining seats in Congress lean Republican. Second, the governorships and state legislatures that will be drawing the new district lines are for the most part in Republican hands. So the newly drawn districts will maximize Republican electoral prospects.

That does not mean, however, that the GOP has a lock on either Congress or the Electoral College. Events can put a political party on the defensive, as Republicans discovered in 2008. Likewise, societal trends can move against traditional Republican positions. Even as more of us moved to or were born in Republican leaning states, public opinion moved the other way on issues such as gays serving openly in the military. Similar trends are evident in the polling data when it comes to gay marriage.

Most important, Latinos are becoming a bigger part of the American family.  Latinos who are citizens and are old enough to vote have been less likely to go to the polling booth than other Americans. When they do vote, however, they lean Democratic. If more Latinos turn out to vote, either because more become citizens, reach the legal voting age, or decide to exercise their franchise, American politics could look quite different. Which, of course, is why both Democrats and Republicans are learning to speak Spanish.