Politics does not stop at the water’s edge in the United States. Don’t believe me? Check out the latest Gallup poll. It asked Americans whether they are satisfied with the country’s role in the world. Democrats and Republicans offer decidedly different answers to that question. 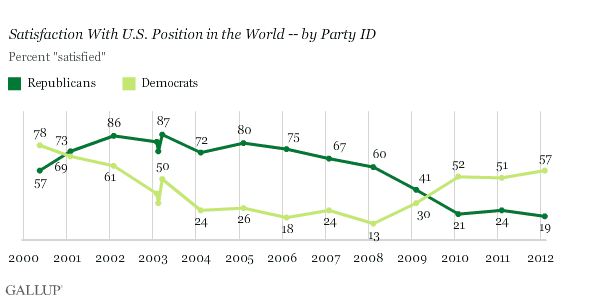 Barack Obama’s foreign policy is different from George W. Bush’s. But it’s not that different. So what this chart suggests is that most partisans on both sides don’t evaluate U.S. foreign policy on the merits; they look at it through the lens of whether they like the occupant of the White House. When control of the White House changes, so does their assessment of how the United States is faring.

So much for bipartisanship.