My colleague at the Council on Foreign Relations, Paul Swartz, has graphed the shift in the composition of the Fed’s balance sheet. The Fed has extended a lot of credit to the financial system -- and supplied even more liquidity by letting the investment banks borrow some of its Treasuries. 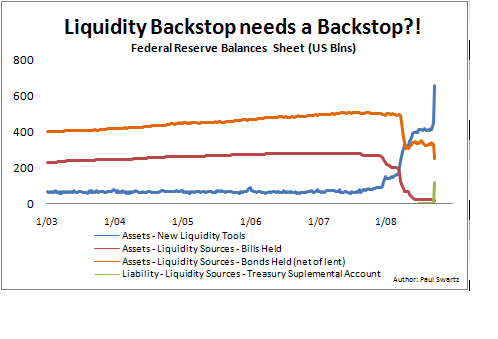 Note: I updated the graph in response to the comments below. The CFR’s web technology does not currently allow the graphs to be expanded. More of Paul Swartz’s graphs -- including a new graph on the impact of the house vote on various financial markets -- can be found on the CGS website.

The amazing thing about this graph is that it doesn’t capture all the credit central banks extended to the financial system last week (Paul used the weekly average numbers, not the data for the end of the week) or the new credit that will be provided by the programs that were expanded today. Those programs should allow the Fed to increase its lending even further.

Right now, the world’s central banks are truly providing the short-term financing to host of troubled banks that are having trouble raising funds in the market. Laurence H Meyers of Macroeconomic Advisers notes:

“The liquidity measures are a stopgap ... You’re funding the banks’ balance sheets, but nobody wants to lend money to them because they’re all afraid of insolvency.”

That sounds right to me. Right now, the US is relying a bit too heavily on the Fed to keep this crisis from spiraling truly out of control. That avoids hard political choices --notably hard choices about how best to recapitalize the financial system -- but it also creates some long-term risks for the Fed.

By my calculations, the supply of marketable Treasury bills not held by the Fed --i.e. the bills actually in the market -- increased from $738.4 to $1200.2b between August 2007 and August 2008. That is a net increase in supply of around $462b. The Treasury was issuing more bills, and the Fed was reducing its holdings to "sterilize" or offset the credit it extended to private financial institutions. The US data on foreign holdings only runs through July, but it suggests that foreign central banks only snapped up $50b or so of this increase: central bank holdings of bills rose from around $180b to $232b. There was a huge surge in private holdings of Treasury bills, with the stock in private hands nearly doubling in 12 months.

And that was before the big surge in bill issuance in September.

Yields on three-month Treasury bills shrank to just 0.29 percent on Monday, a sign that investors were fleeing from any kind of risk, even if it meant earning a return far lower than the inflation rate.

The outstanding stock of notes (coupon paying bonds with a maturity of between one and ten years) not held by the Fed rose by $280b from August 2007 to August 2008, so there wasn’t just an increase in bill supply. And again, there doesn’t seem to be a shortage of demand. Here though central banks have been big buyers.

One other interesting side note: I would estimate that foreign central banks now hold well around 70% of the outstanding $2265b stock of marketable Treasury notes not held by the Fed. To get that estimate I have to assume that central banks account for most of the $260b or so of private purchases of Treasury bonds over the past year bringing their , and that central banks hold few bonds over ten years and few TIPs -- so total central bank holdings of notes are in $1650-$1700b range. Central bank holdings are actually fairly concentrated in certain market segments.

More extraordinary moves: $620 billion is real money, and it isn’t even for American financial institutions ...