For the US housing sector – and the financial firms that financed the boom – a bigger boom meant a bigger bust. Home prices rose higher than before -- and now are falling fast.

Shipping too. The Baltic dry index rose high on the back of Chinese demand. And recently it has fallen even faster than it rose.

The Baltic index tracks the cost of shipping bulk goods. But it is indicative of the broad contraction in global trade that is almost certainly now underway. No wonder that China is now pondering the risk that its export boom could turn into an export bust. Its export boom was comparable in scale to the United States housing boom. Perhaps bigger – as it also drew on demand fueled by Europe’s housing boom (and, until recently, the RMB’s large depreciation v the euro) as well as US demand.

Whatever the cause, China’s exports have grown steadily larger over the past few years. Indeed, as the following chart shows, it is almost impossible for words to do justice to the scale of China’s export boom. 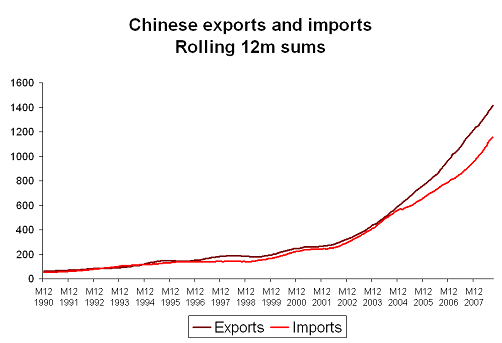 Particularly relative to say the 1990s. Back then the pace of growth was generally slower and – as importantly -- periods of rapid export growth were followed by periods of no growth. This shows up clearly in a chart that looks at the 12m change in exports (exports in the most recent 12ms – exports in the preceding 12ms). 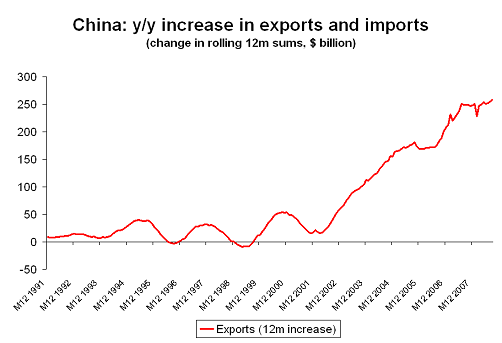 In the 1990s, Chinese export growth looked rather cyclical. In this decade though exports basically just kept growing and growing.

That though is almost certainly changing. My measure of export growth picks up long-term trends, but not short-term changes. If CLSA’s purchasing managers’ survey is right, there is no little doubt that China’s manufacturing sector is heading toward a recession. Real export growth almost certainly will slow sharply in the fourth quarter.

And -- as many have noted -- there is a significant risk that domestic investment may slow along with exports. Some investment was directed at building up the export sector; even more likely went into China’s domestic property market. The scale of any slump in investment really matters. China’s investment boom was a bigger source of China’s growth this decade than China’s export boom.

China’s policy response is directionally right. A large domestically oriented stimulus is exactly what is needed. $585 billion is over 10% of China’s GDP – so it is large. At least it if it is really new money.

Unfortunately, as the FT’s Geoff Dyer notes, that isn’t clear yet. If the stimulus is mostly just funds that China would have spent in any case, its actual impact will be modest. But if it is real new money, it could be large enough to make a difference.

The big question though is whether it can be put into effect quickly enough to offset the likely downturn.

China’s financial sector doesn’t rely on financing from the international banking system. That leaves it in a better position than other emerging economies. On the other hand, China has relied more than most on external demand to support its growth – which is a problem in a global context when external demand is disappearing. Let’s hope China can reorient its economy quickly …

UPDATE: A superb leader on China from the FT.

Not all sovereign funds shy away from strategic stakes

As COVID-19 Runs Rampant, the UN Security Council Must Act