The recent fall in oil prices seems to have caused a wee bit of trouble at a few commodity hedge funds. 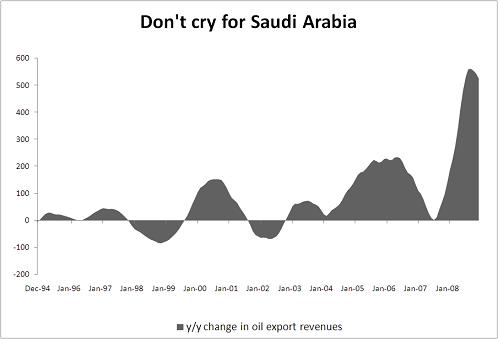 And just to be clear, despite the chart’s title, the chart shows the estimated change in oil export revenues for all oil exporters, not just the Saudis.

Incidentally, the oil exporters probably now need an oil price of around $70 a barrel to cover their import bill, so $500 billion plus isn’t a bad estimate for their combined current account surplus -- or for their official asset growth -- in 2008. I’ll be interested to see the IMF’s estimate of this in the WEO.

The Saudis don’t have a thing to worry about it oil stays at its current level. They can spend more at home and buy more assets abroad. And Abu Dhabi can continue its current spending (oops, investment) spree -- and make sure the world knows that Abu Dhabi, not Dubai, has the real cash. Like Landon Thomas, who recently wrote "Abu Dhabi has sometimes seemed jealous of Dubai’s ability to draw attention to itself," I get a sense that the al-Nahyan family got tired of seeing all the talk of big "Dubai" wealth funds . Abu Dhabi certainly hasn’t been trying to hide its wealth recently -- which is something of a change. It also calls into question why Abu Dhabi continues to avoid disclosing ADIA’s size. The argument that Abu Dhabi doesn’t want to attract too much attention doesn’t really cut it these days.

Forget about the CIC. The state banks are the real story for now