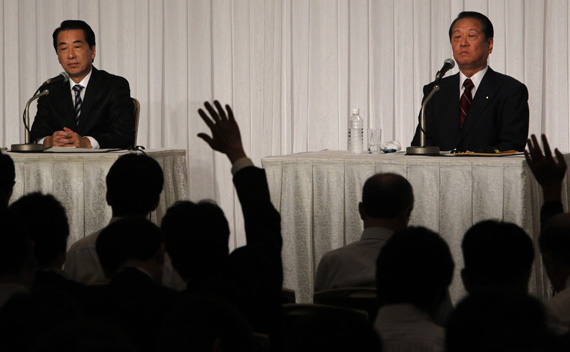 No two candidates could present such a different image for the identity of the Democratic Party of Japan (DPJ). The citizen activist-turned-bureaucratic reformer-turned-party president has been challenged by the former political wheeler and dealer of the LDP-turned-political reformer-turned-electioneering marvel—two visions of the party, and a divided band of loyalists within the party. Next Tuesday’s leadership election is make or break for the DPJ.

This eruption of deep differences within the DPJ is unfortunate timing for the Japanese people. The policy agenda is large—the immediacy of Japan’s economic challenges obvious. The DPJ’s loss in the Upper House election revealed a party with considerable internal hurdles to overcome. The unity and discipline that got them into power dissipated once they were in power, and Prime Minister Yukio Hatoyama resigned to try to allow the DPJ begin again. But clearly that was not enough. The struggle that is now overtly being waged for control over the party’s identity threatens to undermine the DPJ’s effort at governance.

The good news, however, is that the Japanese public—and those of us outside of Japan—get to see what a “policy debate” offers in this election for the party presidency.  To date, we have seen the introduction of campaign manifestos that set out a broad menu for transforming Japanese governance and a new set of politicians that suggest the potential for changing the way Japan governs. Sorely needed, however, are the ligaments that tie personality and goals together—that answer specific questions for the Japanese citizen.

This race has added some clarity. Japan’s economic choices are at the heart of the debate. Mr. Ozawa, claiming leadership experience as his primary selling point, has put forward the idea that the vision articulated in the election campaign leading up to the Lower House election of 2009 should be the “blueprint” for Japan’s future. He wants to give Japan’s local governments subsidies to use freely, and thereby wants to relieve the central government of the responsibility of overseeing their choices. He argues for continuing to reduce waste in government spending, and to find ways of financing the campaign pledge to offer a subsidy to those households raising children.

Mr. Kan argues that these ideas just don’t work under the realities facing Japan today. He urges his party to consider tax reforms—not only the dreaded consumption tax but also a revamping of Japan’s corporate taxes—to increase national revenue, and he calls for continued stimulus for the national economy. Much of what the prime minister is advocating seems sensible, but the root question remains: how does he stimulate Japanese growth and handle the various impacts of the rise in Japan’s yen?

It is Mr. Ozawa’s remarks that seem to draw most attention abroad. The DPJ’s controversial former secretary-general has not been on the dais arguing his policy views for years. He has rather been behind the scenes, planning election campaigns, drawing up lists of candidates, and plotting how to get the DPJ elected into office. More recently the Japanese Prosecutor’s Office has tried to indict him on charges that he violated the law with his campaign funds. This still-pending question of whether he has done anything wrong hangs over his candidacy and plagues the DPJ’s efforts to present themselves as the party of reform.

Mr. Kan, on the other hand, bounded into his role as leader of the DPJ and thus prime minister of Japan in the wake of the disastrous end to the tenure of former Prime Minister Yukio Hatoyama. He and his supporters picked up the pieces of the party, effectively declaring an end to the “money and politics” scandals that had plagued both Ozawa and Hatoyama during the DPJ’s first year in power. Team Kan includes some of the party’s younger luminaries—Katsuya Okada, Seiji Maehara, Renho—as well as some of its most accomplished policy experts—Yoshito Sengoku.

Public frustration with Japan’s politicians is high. The drama of the Kan-Ozawa contest seems somewhat self-indulgent to many Japanese, but there is a need to develop the habit of open policy debate—to continue to push Japan’s political leaders in the direction of clarifying what policies and goals they will implement if they are elected.

Next Tuesday, the DPJ will elect their leader, and the entire 13 year history of this new political force in Japanese politics will hang in the balance. Whether Mr. Kan or Mr. Ozawa, one of these men will need to line up behind the other—without an inkling of doubt as to their purpose—if the DPJ is to survive.

But perhaps even more important than party survival is the fact that the Japanese people sorely need—and deeply deserve—committed and dedicated political leadership. Abstract notions of how to change Japan will now need to be organized into an effective agenda of policy goals.

Those of us outside Japan can only watch to see how this all comes out. Let’s hope Mr. Kan and Mr. Ozawa can see beyond September 14—to the larger purpose of restoring Japan’s confidence in its capacity to energize and organize itself for change.

As India “Looks East,” a Little Problem of Economics