European and U.S. politics have gotten a lot of attention this summer.

But one of the biggest shifts in the global economy over the past two years has been the powerful return of Asia’s trade surplus. A $50 billion monthly (goods) surplus in China is quite big. China’s annual goods surplus is $600 billion, more than it has ever been as a share of world GDP.*

Other major economies in northeast Asia are also running significant surpluses. Korea and Taiwan have large surpluses in goods trade, and Japan has swung back into surplus as well. The combined surplus of all of Asia now tops $700 billion. 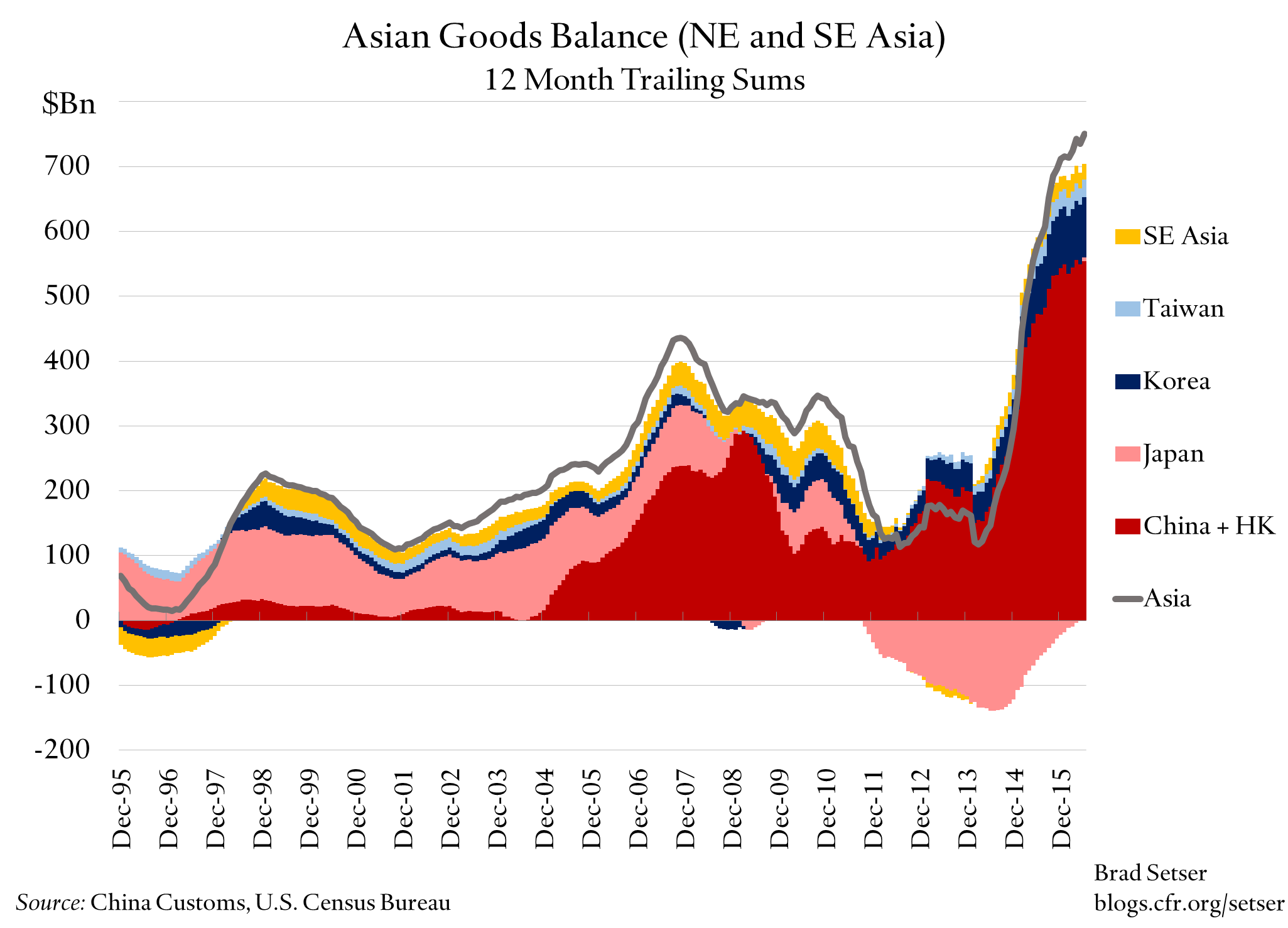 One note: In the graph, I netted Hong Kong’s deficit from China’s surplus. I suspect some goods sold to Hong Kong end up in China.

If you think this is all because of lower oil prices, think again. Northeast Asia’s non-oil goods surplus is also up. The timing of the rise though is a bit different. The non-oil surplus rose in 2014, before the big move in global commodity prices. 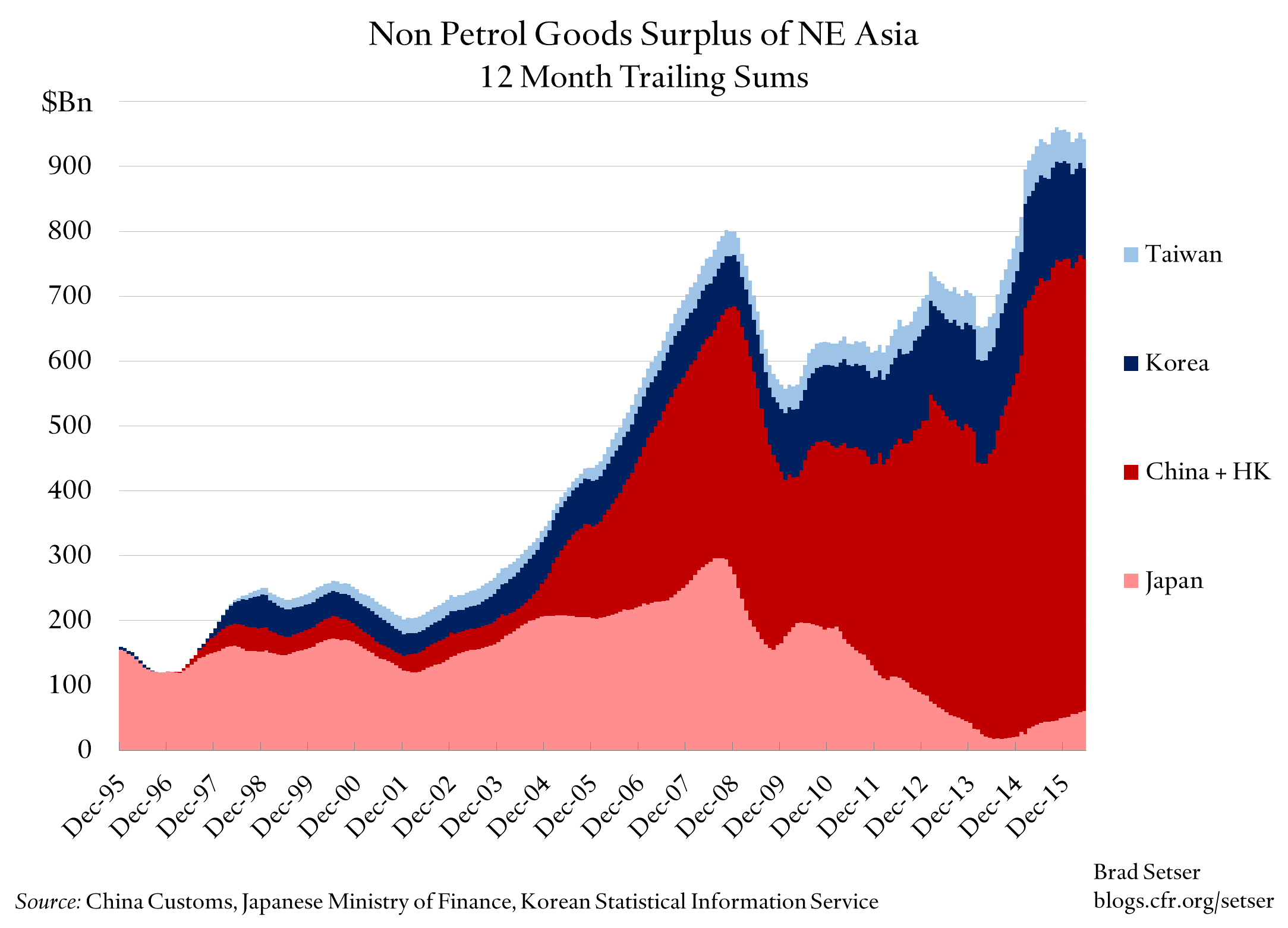 You can see the underlying sources of China’s trade surplus when it is disaggregated by region. In dollar terms, China’s bilateral surplus with its main markets for manufactures in the advanced economies (I included Hong Kong here along with the United States and the European Union because of transshipment) increased after the global crisis. The rising surplus with the large advanced economies was offset by a rising deficit with the world’s commodity exporting economies.

China’s surplus with the U.S. and the EU has come down off its high just a bit recently. But, as the chart below illustrates, China’s deficit with "component" supplying parts of the world economy (the rest of East Asia) is falling just as fast. China’s aggregate surplus with the United States, European Union, and East Asia remains large. That is what drives China’s aggregate surplus in manufacturing. 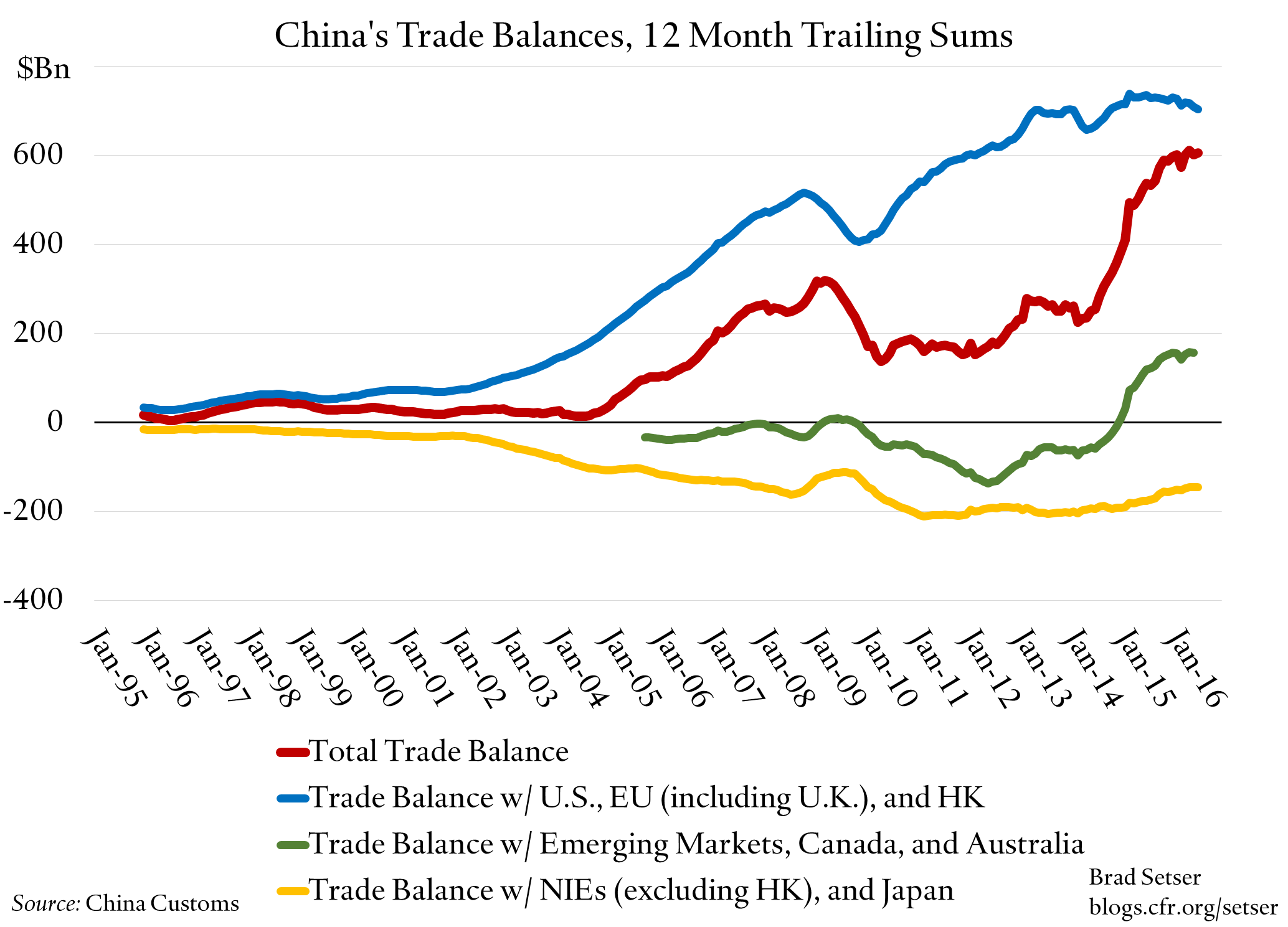 And obviously China’s trade balance with a proxy for the world’s commodity-exporting economies has shifted from a substantial deficit to a substantial surplus over the last two years with the fall in oil and iron prices.

Asia’s large surplus now reflects weakness in its imports more than strength in its exports. With a few notable exceptions, it also is not sustained primarily through intervention in the foreign currency market. But China’s large surplus in goods is still a powerful deflationary force for the rest of the global economy, especially when combined with the German (and eurozone) surplus.

Scaling China’s surplus to China’s own GDP is natural, but it also tends to understate China’s global impact. China’s GDP is a lot bigger than it was before the crisis. The GDP of China’s trading partners isn’t up nearly as much. And China’s goods surplus is balanced by an equal deficit in the rest of the world.

Thanks to a huge surge in China’s services deficit in 2014 and 2015, China’s goods and services deficit surplus has not increased as much as the goods surplus. As a result, the rise in Asia’s aggregate current account surplus is more modest than the rise in Asia’s goods surplus. Even so, Asia’s aggregate current account surplus also is not small right now.

Finally, I would note that all of the increase in the services deficit comes from tourism, and some of the rise in China’s tourism deficit looks a bit suspicious. Tourism imports in the balance of payments rose by about 80 percent in 2014.** The number of Chinese residents travelling abroad rose by around 10 percent in 2014 (anecdotes about the rise in Chinese visitors to Japan are misleading if not combined with anecdotes about the fall in tourism to Hong Kong). But that is for another post.

* China’s goods surplus is around 75 basis points of world GDP, well above its pre-crisis level.

** The tourism data for 2014 also has been heavily revised.

China Sold Reserves in June, Just Not Very Many