Half a trillion dollars apparently doesn't get the respect it used to. Neither the author of last week’s Economics Focus column nor Morgan Stanley’s Stephen Jen think that the Chinese yuan (or RMB) is undervalued, despite annual reserve growth that would have been around $350b last year but for $100b or so of debt purchased by Chinese state institutions and that could approach $500b this year.

The Economist, for all its free market barnstorming, apparently doesn’t mind massive government intervention in the foreign exchange market – intervention that necessarily means governments will be big players in a host of asset markets.

Indeed, it often seems that the larger China’s current account surplus (it looks set to rise above 12% of China’s 2006 GDP), the faster China’s reserve growth, the faster Chinese exports growth (30% y/y in the latest data) and the more net exports contribute to growth (2-3% of GDP in q1, about the same as in 2006), the more the Economist (and, to be fair, some economists) insists that China’s exchange rate isn’t truly undervalued.

The Economist includes many different voices.   This week's leader on the lessons from the 1997 crisis includes a welcome call for China to let its exchange rate move more.  But I think it is fair to argue that its main editorial line consistently has emphasized that the RMB isn’t obviously undervalued even as China's trade surplus soars -- while suggesting that other currencies (the Saudi riyal, the Japanese yen) are.

The Economist tends to pick up on Stephen Jen's arguments, but not those of say Nick Lardy and Morris Goldstein.

And rather than encouraging China to mark the RMB to market, the last week's Economist argues we should all mark the RMB to a model, and specifically to a behavioral equilibrium exchange rate model.   Fair enough.  But marking-to-model poses its own risks, not the least the challenge of picking the right model.

I cannot quite figure out what a behavioral equilibrium exchange model tells us about the currency of a country that manages its exchange rate as heavily as China.   Movements in China’s real exchange rate clearly have been shaped more by central bank policy – notably the dollar peg – rather anything else.

The behavioral equilibrium exchange rate approach – at least as I understand – says that it is impossible to determine whether an exchange rate is under or over-valued based on macroeconomic fundamentals, so it is better to instead to try to find variables that help explain how the country’s real exchange rate has moved in the past:

"This [approach] does not attempt to define long-term economic equilibrium. Instead it analyses which economic variables, such as productivity growth, net foreign assets and the terms of trade, seem to have determined an exchange rate in the past, and then uses the current values of those variables to estimate a currency's correct value"

Given China’s policy decision to peg to the dollar, though, the variable that will appear to drive movements in China’s real exchange rate will be the variable that moves when the dollar moves.   If a weaker dollar leads to higher net foreign asset growth (because it produces a weaker RMB), the model might argue that the even higher foreign asset growth implies an even weaker RMB.

That would, for example, help explain why Jen’s model doesn’t show a current RMB undervaluation, despite a very strong increase in China's current account surplus.

Incidentally, a "world of mobile capital" doesn't pose any problems applying "fundamental equilibrium exchange rate" analysis to China.   For one, China has capital controls, so it doesn't live in a world of mobile capital.  And more importantly, there is a lot more money trying to get into China than trying to get out.   Capital flows are putting upward pressure on the yuan.   China isn't Japan, or Switzerland.

I do not doubt that determining whether or not a currency is misaligned is difficult – and different models produce different results.  But some cases are easier than others.  $500b in intervention does provide a bit of a clue.

Here are three graphs that explain why I remain convinced that the RMB is undervalued significantly.    The first plots Chinese exports and Chinese reserves against China’s real exchange rate.   It sure seems to show that both export and reserve growth picked up when the RMB fell in real effective terms in 2002. 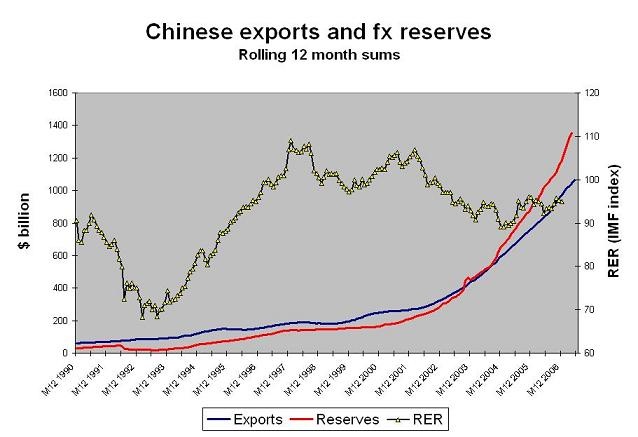 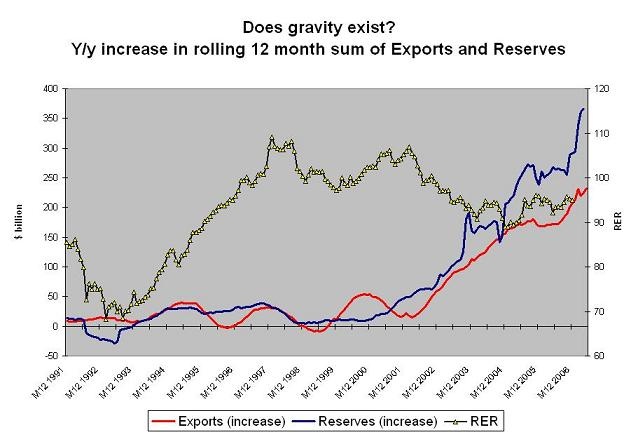 The last chart looks at percentage changes -- it plots the y/y export growth v. the real exchange rate.  It fundamentally is a different way of presenting the data presented in the preceding chart.   China's export growth rate bounced up and down a lot in the 90s (that shows up in the data above as well, with its pronounced hills and valleys).   But generally speaking, the rate of China's export growth was trending down in the 90s, when the RMB was appreciating in real terms, and it then picked up when the RMB started its recent trend depreciation. 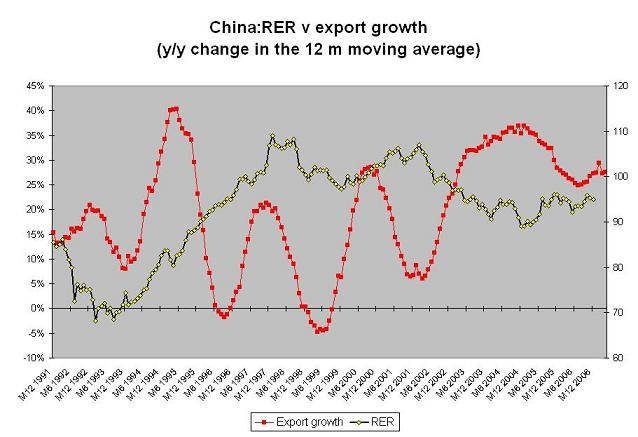 In a lot of ways though, what is most distinction about China's recent export boom is that it has been all boom and no bust.   Export growth rose to 30%, fell to 20% and now has picked up again.   That is a far cry from the pronounced boom/ bust cycles China experienced in the 1990s.   Sure, the strong global economy helped.  But so did the weak RMB.

Suffice to say that if either Morgan Stanley or the Economist trust their model and want to sell RMB five years forward at its current price, I would be a happy buyer.   And if China ever lets the IMF publish the results of its core model for assessing fundamental equilibrium exchange rates, I am pretty confident that model will show that the RMB is somewhat undervalued in real terms.

Reserve diversification &#8212; what does the IMF data tell us?