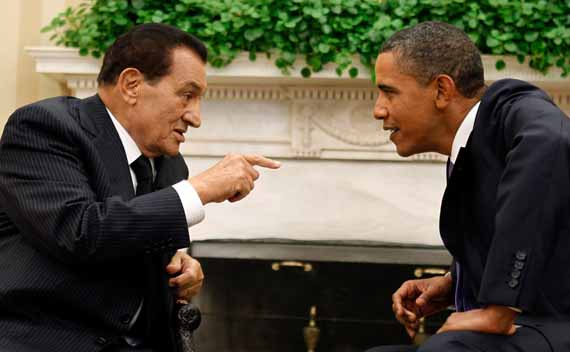 Last week was Egypt week in Washington.  On Tuesday, a bipartisan group of policy analysts, former government officials, and democracy advocates visited with National Security Council staff to express their concern that the Obama administration has not pushed the Egyptian government on political reform.  On Friday, Egypt’s Minister of Finance, Yousef Boutros Ghali, responded with an oped in the Washington Post claiming that Egypt was leading the region in economic and political change.  The following day, the Post’s editorial staff did an admirable job in filling in the blanks that YBG (to both friends and detractors), who has been a servant of the regime since 1986, conveniently left out of his piece.  If you weren’t sure what I meant about “truthiness in Egypt,” Boutros Ghali’s column is a stunning example.

Now, before I go on, I would like to stipulate that:

2.            I believe it is shameful that the Obama administration has said precious little publicly about the ongoing, increasing repression in Egypt;

To continue…since the democracy in the Middle East debate began in Washington around September 11th, but certainly after President George W. Bush announced the “forward strategy of freedom” in the Middle East in 2003, there has been an “airy fairy-ness” to it all.  This isn’t surprising.  There is no data set on democratic transitions in the Middle East. The so-called transitions theories are a bunch of observations about Latin America and Eastern Europe that may or may not be applicable to the Middle East. And, quite frankly, some folks were so caught up the “drain-the-swamp-democracy-will-mitigate-the-terrorism-problem” that they have failed to seriously consider some of the potential downside consequences of democracy promotion.

Instead we get claims like “authoritarian stability is no stability at all.”  Maybe.  Or while acknowledging that the United States may confront some problems in the short and medium term, they downplay these challenges offering “fasten your seat belts it’s going to be bumpy for a while” like analysis (which is no analysis at all) in place of a serious consideration of the potential effects of democracy promotion.  The conceit of this analytic sleight of hand betrays a belief that there are no negative consequences for U.S. interests in pushing Middle Eastern authoritarians to reform themselves out of power.  After all, any veteran flier will tell you that turbulence can be uncomfortable, but almost never fatal. What may be true in air travel may not be true in Middle Eastern politics, however.  Then again, maybe it is. Consequently, I would prefer that we build our foreign policy on good assumptions about the world, not “maybe’s.

Anyway, it seems we may now have a country that can teach us something about transitions in the Middle East—Turkey.  Ankara has been giving Washington fits on the Balkans, Arab-Israeli conflict, and Iran among other issues precisely because it is more democratic than ever before.  To be sure, there are loads of problems in Turkey ranging from the conspiracy within a conspiracy that is the Ergenekon investigation, the punitive tax levy on the Dogan media group, and the constitutional changes that pave the way for court packing to name just a few. My neo-conservative friends argue that Turkey needs more democracy.  I agree, though I do not believe that Turkey needs more democracy because Prime Minister Recep Tayyip Erdogan is either in the thrall of Iranian President Mahmoud Ahmadinejad or Russian Prime Minister Vladimir Putin.  Rather, Turkey is in the intermediate stage of a transition to democracy, which means that it will more often than not manifest both democratic and authoritarian tendencies. As an aside, the irony of the neoconservative argument is stunning:  The neoconservatives were, after all, in the thrall of Ankara when Turkey was decidedly not democratic and firmly under military tutelage.  Also, it strikes me as odd that when a democracy does begin to emerge in overwhelmingly Muslim Turkey, they don’t like it.  I smell a logical flaw.

In the end, Egypt is vastly different from Turkey.  Ankara is of far greater strategic importance than Cairo, making a Turkish transition potentially costly to the United States.  So it may very well be that pushing President Hosni Mubarak on democracy is relatively cost free .  I hope so, but I get nervous when people tell me I can have something, especially something as hard as promoting democracy, without gaining a good understanding of what might go wrong.  There’s been too much of that in Washington over the last decade.

If I am now barred from Elliott Abrams’ candy bowl, and the folks at the Project on Middle East Democracy want to repossess the awesome mug they gave me, I regretfully understand.