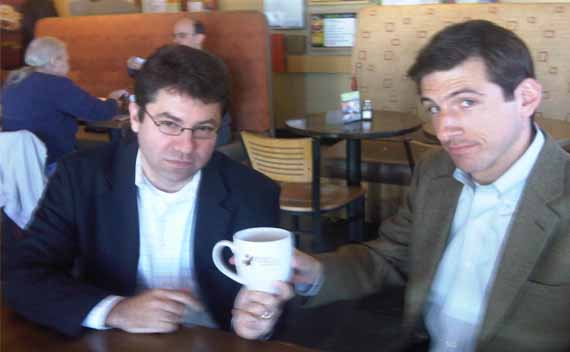 I had been planning on posting something about Iran this week even though it is beyond my “from the Potomac to the Euphrates” writ, but I feel compelled to return to last Monday’s post “Egypt Week in Washington?” Since my take on democracy promotion in Egypt, the editorial writers at the Washington Post have weighed-in again after a meeting between Secretary of State Hilary Clinton and her Egyptian counterpart, Ahmed Aboul Gheit, in which—if press reports are correct—the issue of repression in Egypt was not raised . I also received an email from my friend, Michael Singh, wanting to know if I was calling him “airy fairy.” I assured Michael that I was not, but that I thought the debate about democracy promotion lacked some substance, and had so for some time. I also had a terrific lunch with Andrew Albertson, the executive director of the Project on Middle East Democracy—see the picture above. He actually let me keep the mug.

Yet, it was Issandr el Amrani of The Arabist (the first blog I check every morning after reading up on NY sports teams), who laid down the gauntlet of sorts in a comment on my site. He asked me to delineate the potential risks of pushing the Egyptians on political change. Let me just say that before I start, I wrote the original post only because for all the talk of encouraging the Egyptians to undertake reform, I hadn’t read or heard anyone take up the potential downside risks of democracy promotion with analytic rigor. It is hard to do what I am asking in a blog post, but let me start with a thumbnail sketch of plausible (not possible) risks and their probability. So here goes…

If the United States pushes the Egyptians on democracy:

1) The Muslim Brotherhood will take over (high risk, low probability);

3) The Egyptians will slow down logistical support for U.S. military operations in Iraq and Afghanistan (moderate risk, moderate probability);

4) The Egyptians will be less cooperative on intelligence sharing (moderate risk, moderate probability);

Of course, we can quibble over my designations of low, moderate and high, but please do not argue that the Egyptians will do 2, 3, and 4 anyway because it is “in their interests.” That’s a tautological road that I am not sure my critics want to travel. If you want to argue that something is in Egypt’s interest, you have to demonstrate that Cairo has been willing to sacrifice or exchange something important in the service of these interests.

In any event, taking a hard look at what I have here suggests that the risks of democracy promotion in Egypt are likely manageable. The question then is: how do you do it effectively? During lunch, Andrew suggested that policymakers and advocates for democratic reform think creatively about the kinds of incentives or disincentives that could move the Egyptians in the direction of reform. Hmmmmmm. I like the idea of incentives, but does it have to be that complicated?

You can criticize the Bush administration for a lot of things, but you have to give it credit for the President’s forthright calls for political change in the Middle East and Egypt, in particular. Bush’s bully pulpit had two dynamic effects on the region. First, it helped to change the discourse in the region about reform, which regimes have been unable to reverse despite trying through a variety of coercive measures. Second, it provided cover for democracy activists to pursue their agendas. Even opponents of the United States and Bush, in particular, acknowledged the benefit of the president’s public support for democracy.

So here is my advice to all the good folks at the NSC and State Department who work on this issue: Have President Obama—not the Vice President, the Secretary of State, a spokesperson, but the president himself—say the following in the Rose Garden, the Oval Office, or at the Council on Foreign Relations either the week before or the day after the Egyptian election.

“President Mubarak and the ruling National Democratic Party made commitments to the Egyptian people about free and fair elections, the lifting of the emergency law, and more generally, progressive political change in Egypt. I am disappointed that they reneged on their promises. The Egyptian governments efforts to curtail press freedom, the jailing of peaceful opposition political activists, and ongoing human rights violations run counter to everything officials in Cairo have been promising for the better part of the last five years. Do not ask me, read it in the President Mubarak’s 2006 electoral platform. The Egyptian people, the vast majority of whom want to live in a more open society, deserve better.”

This is definitely picking a fight with the Egyptian government, but not necessarily one that President Obama would have to win right now. It does not involve threats over aid or complicated conditionality formulas or an effort to develop bureaucratic leverage over Cairo. President Obama just needs to keep making the case over and over again. The Egyptian response will most likely be rhetorical only and it signals to Egyptians—activists and others—that the United States has not abandoned the issue of political change.

The downside risk seems to be that President Mubarak will stay away from Washington again and Gamal Mubarak may not drop by the White House in for a coffee on his next private visit to the United States to renew his pilot’s license. It’s worth the risk….