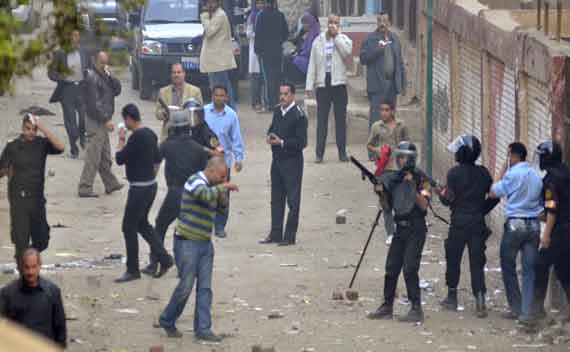 Yesterday’s parliamentary elections in Egypt were pretty bad.  The litany of opposition complaints was long.  As I write, there are 8 confirmed deaths and numerous injured in clashes between the security forces and mainly the Muslim Brotherhood.  None of this should be surprising.  Egyptian elections have hovered in the range of “bad,” “pretty bad,” “worse, but not horrible” for as long as I have been paying attention.  After the opeds, blog posts, editorials, open letters to the secretary of state, and mild statements of concern from a state department or national security council spokespeople, everyone will move on.  There are Wikileaks to pore through, a crisis brewing in East Asia, and peace to be made in the Middle East.  The United States—at least official Washington—clearly doesn’t care about the predatory nature of the Egyptian regime.  The question is, “Why?”

In November 1979, the late Jeane Kirkpatrick penned an article in Commentary called “Dictatorships and Double-Standards.”  All around Kirkpatrick there were troubling signs that the United States was losing the global struggle with the Soviet Union. Earlier in the year, the one time pillar of U.S. Middle East policy, the Shah of Iran, fled his country.  In place of the Pahlavi dynasty came the Islamic Republic of Iran.  In July of the same year, the Washington-friendly dictatorship that controlled Nicaragua collapsed.  In place of the Somoza family, which had ruled the country as an American client since the 1930s, the Cuba-allied Sandinista National Liberation Front came to power.  Soon afterwards, Nicaragua fell into the Soviet orbit.  Kirkpatrick’s piece was also published just as the Iranian hostage crisis began.  A month after “Dictatorships and Double Standards” appeared, the Soviets invaded Afghanistan.

For Kirkpatrick and many others, President Jimmy Carter’s emphasis on human rights was to blame for Washington’s global predicament.  The stakes, according to Kirkpatrick, were too high in the global struggle between the United States and the Soviet Union for American policymakers to care about the character of regimes so long as their leaders were aligned with the United States.  In practice, this meant that human rights, political and personal freedoms, rule of law, accountability—indeed, the range of institutions that make democracies what they are—should be of little or no concern to Washington in the conduct of its relations with American allies.  If those rulers should find themselves under threat from anti-American groups, whether Islamist theocrats or Marxist revolutionaries, then Washington had an obligation to support its non-democratic allies.  Perhaps spooked by the events of the late 1970s, successive American administrations—naturally risk averse—have pursued policies that placed emphasis on the stability that friendly authoritarians could provide.

By any objective measure, the policy of “authoritarian stability” has worked.  The flow of oil from the region was only disrupted once during the 1973 Saudi-led oil embargo, causing temporary economic pain for the United States.  Israel has remained secure and since its peace treaty with Egypt in 1979, and has not confronted the prospect of fighting an all out war with its neighbors.  And since the mid 1970s when Henry Kissinger flipped Egypt, Washington has been the region’s predominant power.

With short time horizons and pressing political concerns, American presidents seem loathe—except for a brief moment during George W. Bush’s tenure—to alter Washington’s approach to the Arab world best described as, “It’s broke, but it seems to work ok, so let’s not touch it for fear of what may or may not happen.” It’s a vicious cycle to which Washington seems hopelessly trapped.  Egypt no longer has champions inside the Beltway, but American policymakers remain frozen in their fear that political change will bring instability, which will place U.S. interests in jeopardy.

Many thanks to Issandr El Amrani, Shadi Hamid, and others for the almost constant updates on the elections.  They were extraordinarily helpful for those of us watching from Washington.