Emerging Voices features contributions from scholars and practitioners highlighting new research, thinking, and approaches to development challenges. This article is by Paul Callan, Andria Thomas, Sebastian  Burduja, Leticia Kawanami, and Adam Bradlow of or formerly of Dalberg Global Development Advisors. Here they review how the agreements of the Paris Declaration played out in practice.

The Paris Declaration, signed in 2005, was a milestone in the effort to improve aid effectiveness; donors agreed to give money directly, and with fewer strings attached, to developing country governments, who in turn promised to improve their management and use of aid. Six years after the agreement, the Paris Declaration Evaluation, conducted by IOD PARC from 2009-2011, found that donors had made almost no progress on their commitments and that some, but far from all, developing countries had improved their management of aid.

At Dalberg, we used the results of the evaluation to track the progress developing countries made in strengthening their national aid systems and meeting their Paris Declaration commitments. We identified three Paris Declaration indicators for which developing countries were principally responsible: creating national development strategies and expenditure plans, strengthening public financial management systems, and monitoring results via performance assessment frameworks.

In Chart 1, we plot changes in these three Paris indicators between 2005 and 2007 against changes in Official Development Assistance (ODA) inflows from 2005 to 2009. We found no clear correlation between stronger implementation of Paris commitments by developing countries and increased inflows of ODA, even though the data in Chart 1 allow for the possibility of a time lag between progress by developing countries and increases in ODA from donors. 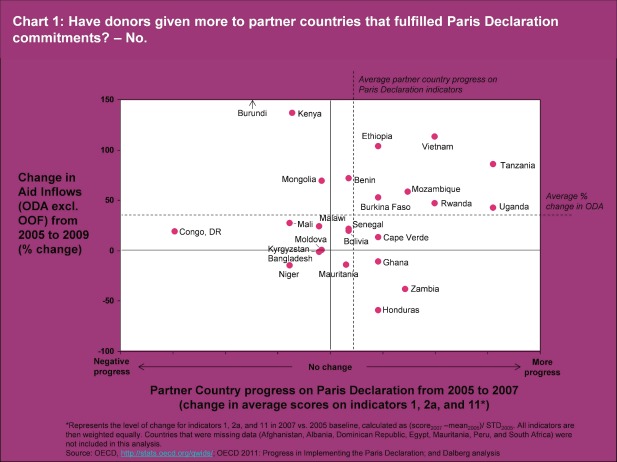 A few countries, including Honduras, Zambia, and Ghana, made significant improvements on Paris indicators between 2005 and 2007, yet their aid actually decreased over time. Meanwhile, for some other countries, such as Burundi and Kenya, whose performance on the Paris indicators disimproved between 2005 and 2007, ODA significantly increased. Despite asserting, in the Paris Declaration and elsewhere, that they want developing countries to use aid more effectively, donors do not appear to actually invest more in countries that do what is asked of them.

Even without additional aid, making progress toward aid effectiveness should, in theory, improve a developing country’s use of resources and development. In Chart 2, we plot changes in Paris Declaration indicators between 2005 and 2007 against percentage change in the Human Development Index (HDI) between 2005 and 2010 in those countries. The data do not show any correlation. This suggests that improvements in the management of aid (and of a government’s own resources) are not enough to further development goals, at least in the short term. 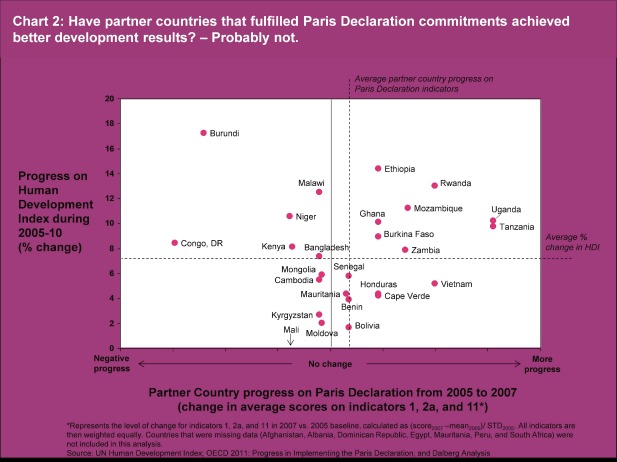 Of course, our analyses must be read with some caution, especially in the case of Chart 2. The three Paris indicators we measured might not fully capture the extent of improvements in a government’s management or use of aid. Development results also depend on many factors and often lag significantly behind improvements in government policies and institutions. In addition, donors must consider factors other than aid effectiveness, such as overall need or humanitarian crises, in deciding how to allocate aid. Nevertheless, it seems particularly counterintuitive that donors do not give more aid to developing countries that meet their Paris Declaration commitments. Failing to do so is potentially counterproductive: donors who do not hold up their end of the bargain and do not reward progress threaten to undermine the legitimacy of the Paris Declaration and other aid effectiveness agreements.

Puzzle PISAs: What the Latest Tests Reveal about Global Education