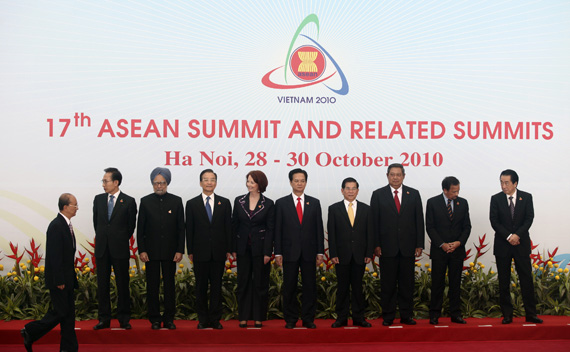 Of all the actors implicated in the release this past weekend of Aung San Suu Kyi, surely the Association of Southeast Asian Nations was among those who reaped the least benefit. Since admitting Myanmar in the late 1990s, ASEAN has realized that the decision was an enormous mistake, since the junta’s behavior wound up dominating ASEAN meetings, discussions with the United States and other outside powers, and tarnishing the group’s reputation. By getting the Obama administration to meet with ASEAN leaders even though Myanmar sat at the table, ASEAN thought it had finally extracted itself from being beholden to the junta in Naypyidaw.

But no. With Suu Kyi’s release, which puts pressure on the junta to allow her to travel and re-form her political organization and puts the international spotlight on Myanmar again, ASEAN will again be dominated by the Myanmar issue, which will paralyze meetings of the organization and, potentially (if the junta commits another atrocity against Suu Kyi and her party), will create a new divide between ASEAN and Western partners like the United States and the European Union.

ASEAN hasn’t exactly helped itself, either. ASEAN head Surin Pitsuwan, who as a Thai official was known for relatively principled stances on human rights, all but endorsed the Myanmar election before it happened, even though it was sure to be rigged. Following the poll, Vietnam, who holds the rotating chair of ASEAN, praised the obviously flawed election as a “significant step forward,” a statement reflecting the overall ASEAN position. Before Suu Kyi was released, ASEAN foreign ministers discussed her imprisonment with the Burmese foreign minister, who simply told them Myanmar would follow the law on her case, as if Myanmar were Britain or Japan, with a real functioning legal system. The foreign ministers did little more.

To be sure, a few ASEAN members, like the Philippines, have consistently criticized the Myanmar junta’s human rights abuses, but they are relative outliers among the group, most of whom, of course, are either authoritarian states or have suffered their own regressions from democracy in recent years. But even the more repressive members of ASEAN can see that Myanmar does not even follow the limited and basic rules set down for the group, instead flouting all of its norms. Perhaps ASEAN should think, once again, about whether it might kick Myanmar out.