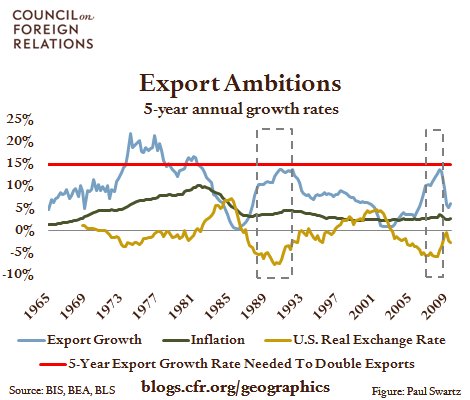 In his State of the Union address, President Obama set an ambitious goal of doubling exports in five years. To achieve this goal, exports must grow by nearly 15% annually, shown by the red line in the chart above. Since 1965, the only time such a nominal growth rate has been achieved for several years was in the mid-1970s. This growth was driven by high inflation, and was thus in large part a money illusion. In the early 1990s and late 2000s, export growth neared the 15% rate. As illustrated by the gray boxes, in each case the U.S. real exchange rate declined significantly during the period. Thus to realize his export ambitions, the president will likely need significant (and unwelcome) inflation or another major fall in the dollar – or both.

What Happens When the Fed Stops Buying Government Debt?