China’s customs agency said Wednesday that merchandise exports in February plunged 25.7% from a year earlier. That is one of the biggest drops on record, and extends the 17.5% fall in January for a fourth straight monthly decline. Imports declined by a slightly less dramatic 24.1%, thanks in part to government spending, which other data also issued Wednesday showed picking up in February. That left a monthly trade surplus of $4.84 billion – the smallest in three years. The number was just a fraction of January’s $39.11 billion, reversing a string of record surpluses in recent months.

But looking at the February data in isolation is always risky. As Macroman notes, the timing of China’s new year celebrations has a large impact on the y/y data. To avoid this, look at the combined data for January and February. 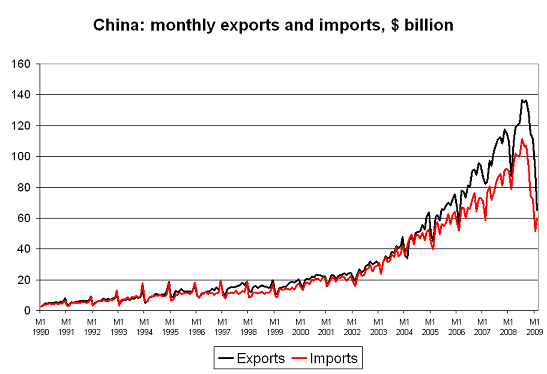 After soaring for most of this decade -- the pace of China’s export growth clearly turned up in 2002 or 2003 and then stayed at a very high pace -- China’s exports are falling back to earth. The surge in China’s exports could prove to be as unsustainable as the rise in US (and some European) home prices. They might end up being mirror images ... as Americans and Europeans could only import so much from China so long as they could borrow against rising home prices.

China trade surplus for the first two months of 2009 was close to $44 billion -- well above the $28 billion registered in the first two months of 2008. Nonetheless, there is now at least some evidence suggesting that the q4 rise in China’s trade surplus has ended. As the following chart shows, the 12m sum of China’s surplus has stabilized while the rolling 3m sum has turned down. 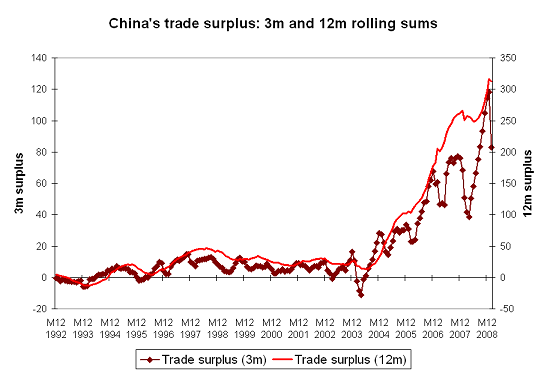 However, the downturn in the rolling 3m sum doesn’t mean much. China’s surplus usually falls for seasonal reasons in the first quarter of the year. The real test is still to come ...

The fall in commodity prices and a (likely) domestic slowdown suggest a rise in China’s surplus.

The dollar’s rise -- and the resulting real appreciation of the RMB -- and the slowdown in global growth by contrast suggest a fall in China’s surplus.

The balance between these competing forces isn’t yet clear, at least to me.

The Financial Times’ proposed agenda for the G-20