American's home bias -- or at least American institutional investors' home bias -- seems to be falling.  Americans are more willing to hold a share of their financial assets abroad. Stephen Jen thinks the recent uptick in US demand for foreign assets  -- the following chart shows the rolling 12 month sum of US purchases of long-term foreign bonds and foreign equities in the TIC data -- is one cause of dollar weakness. 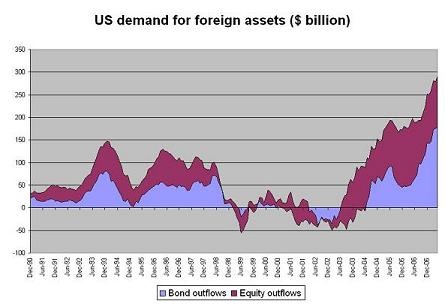 No doubt he is right: the more Americans want to move their funds abroad, the more US assets foreigners need to buy.   Foreigners in effect have to finance both the US current account deficit and American purchases of foreign assets.

By contract, Russians - private Russians -- seem a lot more enamored with their own currency than the used to be.    They no longer hold quite as many dollars under the mattress (hat tip, Barry Ritholtz).  A lot of the dollars previously held under the mattress -- estimated dollar holdings are now falling -- seem to have been traded for rubles and moved into local banks -- though no doubt some are going into euros as well.

Dollars(cash) under the mattress don't pay interest.   But for many years, they actually were a pretty good financial asset.   So long as the rubles was falling, mattress money produced steady capital gains.   Sort of like housing in the US until the last year or so.

And it has turned out that a lot of Eastern Europe was far more interested in holding appreciating dollars than depreciating dollars.   I (briefly) worked on Bulgaria in late 2002, and at the time, Bulgarians decision to take dollars out from under the mattress and convert them into bank deposits denominated in the Bulgarian lev (which is tied to the euro through a currency board) was a big influence on the balance of payments.   The dollar had just started to depreciate against the euro back then.  Bulgarians didn't like to see the lev value of the dollars fall, and suddenly started selling dollars for euros and ultimately lev.

I suspect something similar is happening in Russia.  I don't think the decline in Russia's dollar holdings is simply a product of a lack of large dollar-denominated notes.

One of the most important global trends of the past few years has been the growing willingness of private investors -- foreigners and local residents alike -- to hold financial assets denominated in emerging market currencies.  Home currency bias certainly seems to be increasing in a lot of emerging economies; a lot fewer financial assets are denominated in dollars (and euros for that matter) than used to be the case ...

The answer of course is that central bank demand for dollars continues to grow ...