Cross-border bank claims - according to the Bank for International Settlement (BIS) -- shrank in the first quarter, though at a slower pace than in the fourth quarter. That basic storyline also holds for the emerging world: the total amount the major international banks lent to the world’s emerging economies fell in the first quarter, but not at quite the same rate as in the fourth quarter.

The fall in cross-border flows is often presented as evidence of the dangers posed by financial protectionism - as governments that are now forced to backstop global banks aren’t inclined to backstop "their" banks global ambitions.

But there may be a simpler explanation for the fall in cross-border claims: the boom was unsustainable. Cross-border loans to the emerging world grew at an incredible clip from 2005 to mid 2008. Total lending more than doubled in less than three years, rising from a little under $1.4 trillion to $2.8 trillion. 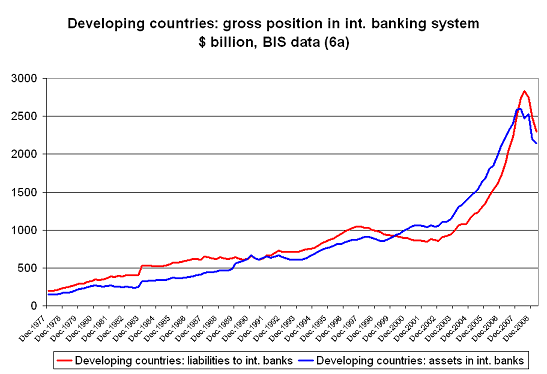 Some of that rise was offset by a rise in the funds emerging economies had on deposit in the international banking system. Emerging market central banks in particular were putting some of their rapidly growing reserves on deposit with the big international banks. But there was still a huge boom in lending -- one that probably couldn’t have been sustained no matter what.

Bank loans to emerging economies did fall sharply in q4 2008 and q1 2009, as one would expect given the magnitude of the crisis. For all the talk about financial protectionism, I suspect that they would have fallen far faster if governments hadn’t stepped in to stabilize the international banks -- and to mobilize a lot of money for the IMF so the IMF could lend more to emerging economies, reassuring their creditors.

Looking only at the pace of the fall -- and ignoring the speed of the rise -- strikes me as a mistake. 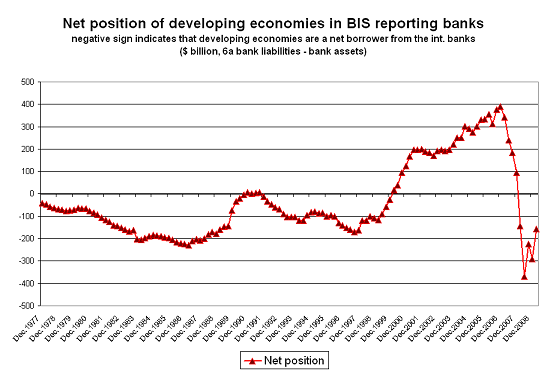 There is certainly a case that emerging economies should be borrowers not lenders from the major international banks. The flow of funds from poor to rich is perverse.

But the 2006 to mid-2008 swing in emerging economies’ net position in the international banking system was incredibly fast. With the benefit of the hindsight, the size and pace of the shift should was a signal that vulnerabilities were building. Especially as the swing reflected extremely rapid growth in cross border lending to the emerging world, and a lot of those loans were quite short-term ...