Japan’s trade surplus is rising.  Its current account surplus should be rising even more, as its interest income should be increasing too.   The MoF is getting a bit more on its US portfolio.  And Japanese housewives investing in Australian and New Zealand bonds get a bit of carry as well …

What of Korea, an Asian economy that has allowed its currency to appreciate significantly against the dollar, yen and yuan?  It now has a current account deficit.

There is a bigger point.   On a global level, it seems pretty clear that Asia’s current account surplus is still rising.    China’s surplus is growing fast.  Japan’s is growing a bit more slowly.    That suggests that the fall in the oil exporters’ surplus may be offset by a rise in Asia’s surplus, not a fall in the US deficit.    Something to watch.

Two.  Someone is betting on the revaluation of the Kuwaiti dinar

Kuwait’s reserves exploded in March, presumably because a surge in capital inflows led to a surge in intervention.    Some in the Gulf aren’t so keen on these “speculative” inflows, but in this case, speculation is doing nothing more than putting pressure on the Gulf to correct an obvious misalignment.   The Gulf is booming, the US is slumping – and the Gulf’s link to the dollar leads to imported inflation.  Rather than importing macroeconomic stability from a dollar peg, the Gulf is importing a lot of things it doesn’t need.

Anthony Chan of Alliance Bernstein (hat tip Rachel Ziemba) estimates that the Chinese banks ended 2006 with $42b offshore from their IPOs.   It also estimated that China has done about $50b in swaps with the banks (we know China did around $14b in late 2005 from the IMF, and I wouldn’t be surprised by another $50b in 2006).   Central Huijin also holds $60b in foreign assets, if not a bit more, as part of the bank recapitalization process.   Sum it up, and the Chinese banking system ended 2006 with roughly $150b in dollars (I assume these are mostly held in dollars, but that is an assumption).  And these are dollars that didn’t come from domestic dollar deposits or credit lines from the international banking system.

China.  Russia.  Taiwan. Japan (maybe).  Makes sense too.  China, Russia and Japan are all way overweight debt in their respective portfolios, and since they all have more reserves than they need, they don’t need to hold safe, liquid assets.   Moreover, Treasuries in some sense aren’t a “safe” asset – the US government won’t default, but the dollar could slide.   Shifting from Treasuries to equities offers a bit of protection.   Big US firms have foreign revenues, the US government doesn’t.  There is a bit of implicit diversification.     And right now there is a big gap between the US portfolios of countries that have investment funds (Norway, Singapore) and those that don’t (China, Russia). 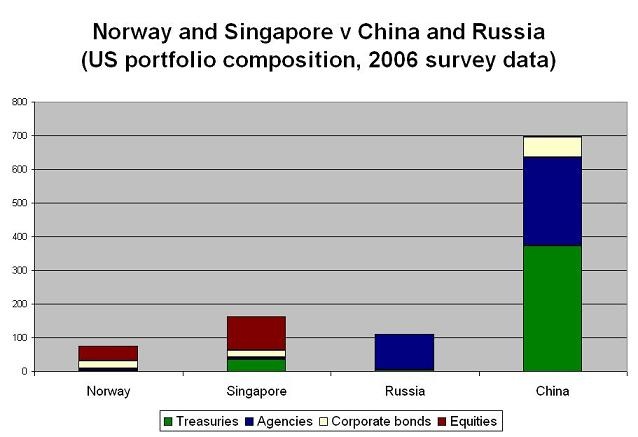 This shift may have a smaller impact on the equity market than many expect – I suspect that private equity funds and the international banking system have been rather good at transforming central bank demand for debt into demand for equities over the past few years.    Central banks put dollars on deposit in London, the banks buy leveraged loans, and private equity shops by “public” equities to take firms private.   When the PBoC buys Agency bonds from a US pension fund which then shifts some of its portfolio toward “alternatives” the net result is more or less the same.

It might by contrast have a bit of an impact on the debt market.

Right now though, central bank reserves are rising far more rapidly than countries have been able to set up investment funds.  Total central bank demand for debt (US and European debt) is still growing strongly.

Five.  Some things don't change.  Brazil is still intervening in the currency market.

Brazil's reserves continue to increase this week.  They were up $0.6-0.7b on Monday.  And the central bank bought more dollars in the market on Tuesday and Wednesday.  Those purchases should show up in the data later this week (there is -- I gather -- a bit of a lag between BCB intervention and an increase in Brazil's reserves, since it takes a while for everything to clear).

I wonder when Brazil will start to contemplate and investment fund.  Brazil's reserves are mostly in depreciating dollars and it too will soon have more than it really needs.