Anticipation is heating up around another release of oil and petroleum products from the U.S. Strategic Petroleum Reserve (SPR), likely in coordination with the United Kingdom, France, and possibly others.

But there are profound concerns with using strategic reserves to manage prices in the short-term. As John Deutch of MIT pithily put it, this is using our national oil stockpile as a tactical rather than strategic petroleum reserve.

And history is littered with the graveyard of various government attempts at managing commodity prices, such as the buffer stock stabilization programs by South and Latin American countries in the 1960s and the Nixon Administration’s attempt at price controls in the 1970s. And with very good economic reason, something that I will discuss in more depth in subsequent posts.

But politics in an election year rarely plays second fiddle to sound economics. If one still insists on using strategic stockpile releases for tactical price management, then at least try to make sure that the price increase one is fighting is temporary rather than permanent.

A permanent price increase driven by fundamental supply and demand will shrug off any attempt at tactical price stabilization. But a temporary price increase due to a transient disruption such as a hurricane or seasonal demand (or stretching it, geopolitical event with a finite horizon) may be mitigated with a stock draw-down.

A helpful guide is to watch what the private sector is doing. If the market thinks recent price jumps are temporary, they will draw down inventories to tide over current demand and rebuild them in the future when prices are expected to be lower.

On the other hand, if the market thinks recent price jumps are permanent, then the private sector will keep inventories level or even build them in anticipation of further price increases. (Actually, even if prices don’t change but price volatility increases, then inventories would be built due to the option value of having storage.)

If a government tries to make a tactical release in the face of permanent price increases, then it is fighting the private sector. Any government releases may be counterbalanced or even directly absorbed into private sector builds. This arguably may have defeated the previous SPR release last year.

A point in favor of an impending release is that at least private inventories in the places we can observe them (basically, the OECD) have declined considerably since last year, suggesting markets may be seeing recent price rises as temporary (see chart). 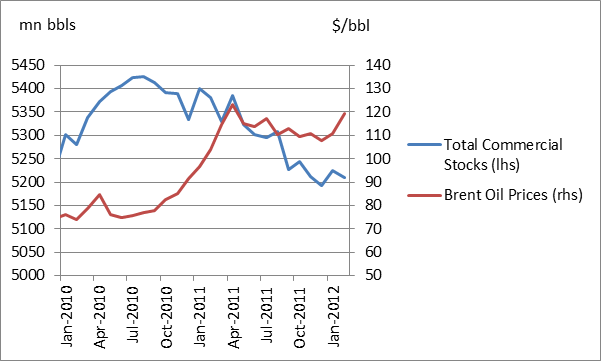 On the other hand, this may also be because weaker economic growth and lower demand in developed economies may be disincentivizing the private sector from holding inventories.

Furthermore, there are anecdotal reports that the private sector or even governments in less transparent areas of the world may be building stockpiles. It is pretty disappointing if any oil released out of the U.S. SPR is ultimately ending up (given fungible oil markets) in Chinese strategic reserves.

It is hard to determine what the full picture is saying. This is another reason why fundamental data on demand, supply, and inventories is so critical for the proper functioning of energy markets.

So bottom line, if you have to do tactical stockpile releases, only counter temporary price increases. Try to follow rather than fight the private sector inventory decisions. Make an extra effort to ensure that SPR release do not disappear into private storage, for example, with direct sales to end-user consumers and refiners rather than recipients with access to storage facilities. For the future, consider having some of the SPR in the form of refined products, which is a lot costlier to store and therefore more likely is actually used rather than stockpiled.