Or perhaps a Sino-North Atlantic or Sino-Euramerican imbalance. Europe plays a supporting role in the drama.

If oil averages $50 or so this year and $60 or so next year – and if intra-European surpluses and deficits are netted out – the world’s macroeconomic imbalances reduce to the United States external deficit (which the IMF estimates will be under 3% of US GDP in 09), a somewhat smaller EU deficit and China’s 10% of GDP surplus.

On the surplus side of the global ledger, the IMF forecasts that there will soon be China – and almost no one else. 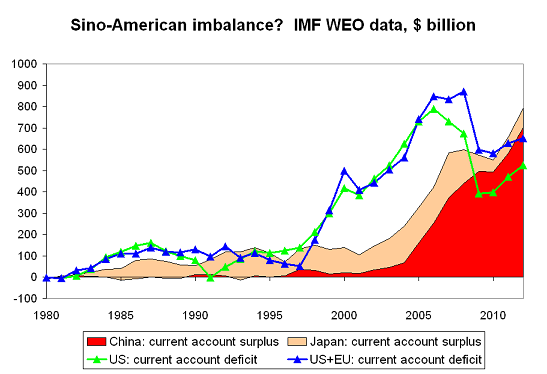 Stacking Europe on top of the US makes it hard to see Europe’s contribution to offsetting Asia’s surplus over the past two years. The US deficit peaked in 06; if Europe’s deficit hadn’t increased dramatically since then, Asia couldn’t have run such a large surplus (remember that from 06 on, most Asian currencies were deeply undervalued v Europe) at the same time as the oil exporters. Deficits and surpluses have to add up globally. 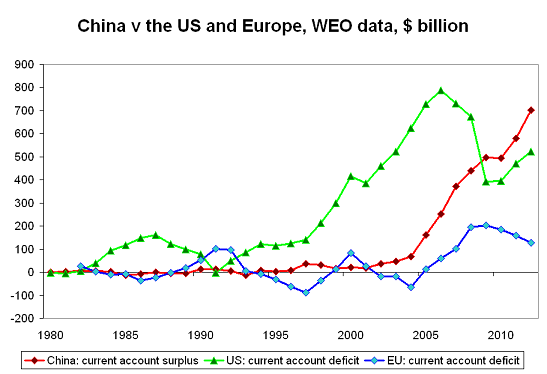 The IMF doesn’t current expect China’s stimulus to bring China’s current account surplus down. From a savings and investment view, I suspect the IMF expects a rise in public investment to offset a fall in private investment, not increase total investment – and the swing in the fiscal deficit to partially be offset by a rise in household savings. Just a guess though. And on the trade side, the fall in exports will be offset by the impact of lower commodity prices. The fact that China’s current account surplus is expected to stay large over time also suggests that the IMF continues to believe that the RMB is undervalued.

The bigger question though is whether or not China will still be willing to accumulate the very large claims on the world implied by the IMF’s forecast. China is already worried about the long-term value of its $2.3 trillion or so in reserves and hidden reserves.

The current account surpluses in the IMF’s forecast implies that Chinese claims on the world would rise by another $2.3 trillion over the next 4 years. If private Chinese savers don’t want to add to their dollar and euros, the government would need to resume buying – on a large scale.

The IMF doesn’t attribute the current crisis directly to global imbalances. Fair enough. The proximate trigger for the global downturn was a collapse in private financial intermediation, not a collapse in net demand for US financial assets. It wasn’t linked to a dollar crisis -- at least not directly (more on this later). The subprime crisis of August 07 proved bad for the dollar; but Lehman’s crisis unleashed a bout of deleveraging the supported the dollar. The US consumer - -and US financial sector -- gave out before the rest of the world’s willingness to finance the US.

At the same time, as Martin Wolf and others have emphasized, the capital outflow from the emerging world to the US and Europe – a flow that was necessary to support large household deficits in a country like the US where neither the government nor business was savings – wasn’t a private flow. The scale of emerging market reserve growth was far far larger than ever in the past. And that includes the period immediately after the Asian crisis when a host of countries added to their reserves on a large scale. 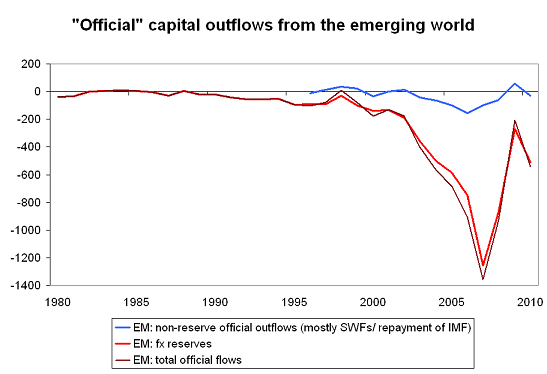 The IMF seems to expect a return to this pattern – just with a smaller number of players, smaller aggregate flows and smaller deficits in the US (scaled to GDP). China’s surplus would continue to fuel Chinese reserve growth and thus the buildup of Chinese government claims on the US and Europe. And, implicitly, China’s government would risk ever larger losses on its ever growing foreign portfolio – at least so long as China finances the world by buying dollars and euros, not making yuan-denominated loans.

* The IMF’s data includes SAMA but it excludes the Asian NIEs (Korea, Taiwan, Singapore and HK) and leaves out China’s non-reserve foreign assets. It thus understates headline emerging market reserve growth. On the other hand, I am not sure if it is adjusted for valuation effects, so it may overstate reserve growth when the dollar is falling.

Data all comes from the IMF WEO’s interactive data base.

Give the IMF credit (literally, and figuratively)