Above the Fold. The reactions this week by proponents of the Afghanistan surge to President Obama’s decision to withdraw 33,000 U.S. troops over the next year bring to mind the advice supposedly given to lawyers about to try a case: If the facts are with you, pound the facts. If the facts are against you, pound the table. There is a lot of table pounding going on in Washington these days. Supporters of the surge are invoking the specter of rising isolationism. It’s easy to see why they are making this charge. “Isolationism” is a losing label in American politics, much like “liberal" or “reactionary.” No one wants to get stuck with it. But is the charge true? No. The percentage of Americans who think the United States should mind its own business overseas is actually down three percentage points over the past two years, according to Pew Research Center polls. Among Republicans the number is up a scant two percentage points over the same two-year-period—in the context of a poll, that difference is background noise. The fact is that supporters of the surge are losing the argument on the merits. What is rising isn’t isolationism but an understandable skepticism after ten years of promises that our policy in Afghanistan will work and be worth it if it does. To suggest otherwise is to engage in what someone I greatly admire calls "argument by epithet." That’s a high brow way to say “pound the table.”

CFR Event of the Week. Judith McHale, undersecretary for public diplomacy and public affairs at the State Department, stopped by CFR this week to speak with James Rubin, executive editor of Bloomberg View, about the future of U.S. public diplomacy in light of the Arab Spring. McHale highlighted the importance of reaching out to the majority of people rather than only to political leaders. CFR.org has made the audio and video of the event available, or if you prefer the traditional approach you can read the transcript.

Read of the Week. Al Gore provides a nice primer in the pages of Rolling Stone Magazine on the evidence that suggests that human activity is changing the global climate. The news media and the blogosphere have jumped all over the article because Gore argues that President Obama “has thus far failed to use the bully pulpit to make the case for bold action on climate change.” What gets lost in that framing of what Gore wrote is his broader analysis of how the strengths of our political system frustrate efforts to take the steps needed to avoid fundamentally altering the climate. Here’s something any economist or political scientist would be happy to explain: decisions that are rational for individuals to make can produce outcomes that are irrational for society as a whole.

Blog Post of the Week. David Rothkopf questions the assumption popular with many political candidates—and much of the American public—that presidents should take their lead on defense matters from “the generals.” (That formulation presumably includes admirals as well.) He rightly notes that “nothing teaches skepticism of the advice of military leaders like the experience of warfare. President Lincoln discovered it. Roosevelt did too. So did Truman, Kennedy and Johnson.”

Poll Question of the Week. The Pew Research Center polled Americans on the eve of President Obama’s speech to the nation this week and found a public deeply skeptical of the war in Afghanistan. Here’s the key question: "Do you think the U.S. should keep military troops in Afghanistan until the situation has stabilized, or do you think the U.S. should remove troops as soon as possible?” Fifty-six percent of Americans responded: remove troops as soon as possible. That number is the highest number since Pew started asking the question, and it’s up seven percentage points from a month earlier. So Republicans accusing President Obama of ordering a precipitous withdrawal look to be misjudging public sentiment.

Chart of the Week. It’s no secret that the United States imports more than it exports. But how does the U.S. trade position look when compared with other major economies? A glance at the so-called current account balance shows that the United States is far from the only big economy running a deficit. And while the United States is running the world’s largest current account deficit by far in absolute terms, its economy is also far larger than most other economies. (The U.S. economy is nearly eleven times larger than Spain’s.) China, Germany, and Russia, however, are all running sizable current account surpluses. China and Germany are in the black because they export manufactures; Russia is in the black because it exports oil and gas. 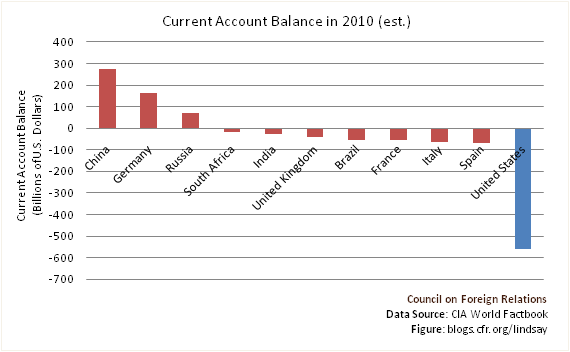 Too Good Not to Note. David Rothkopf reflects on President Obama’s speech on Afghanistan. Josh Rogin explains why the Senate will take weeks and not days to get around to considering any resolutions on Libya. Steven Cook writes from Cairo on the debate within the Egyptian elite over which to do first: write a Constitution or hold an election. Scott Snyder examines how inter-Korean tensions have raised the risk of a “friendly fire” incident. Laura Rozen summarizes a new report by a panel of scientists and conservationists warning of the accelerating decline of ocean life. Matt Bai profiles former Utah Governor Jon Huntsman, whose presidential candidacy seems to divide the punditocracy.

Perils of Prediction. "Television won’t be able to hold on to any market it captures after the first six months. People will soon get tired of staring at a plywood box every night," Darryl Zanuck, 20th Century Fox, 1946

Quote to Ponder. “Summer afternoon—summer afternoon; to me those have always been the two most beautiful words in the English language.” Henry James.

A Reason to Smile. Graduating from high school. Congratulations, Ian.

The World Next Week: Obama Decides on Afghanistan