Above the Fold. Football season is over, but Washington’s annual budget brawl begins Monday when President Obama rolls out his FY 2012 budget. His specific plans for investments in education, infrastructure, and research will attract the most attention, with Republicans complaining that this is spending we can’t afford. But keep an eye on the defense budget, where the White House reportedly will ask for $554 billion to cover basic expenses and another $117 billion to cover operations in Afghanistan and Iraq. The near-term question is whether defense can escape the budget knife while domestic spending gets cut. The longer-term question is how DoD will pay for its looming procurement bill. Many of its ships and planes need to be replaced or refurbished in the coming decade. How to pay for these big ticket items in an era of flat or declining (in real terms at least) budgets will be a challenge for Secretary Robert Gates and his successors. Will this be the year that we get a debate on whether America’s commitment to Afghanistan is worth the cost? After all, $117 billion can buy a lot of military hardware. Stay tuned.

CFR Event of the Week. 2011 was supposed to be the year that domestic issues took center stage in American politics. That may still happen. But right now foreign policy is grabbing the headlines. Joe Nye, distinguished service professor at Harvard University, and Gideon Rachman, chief foreign affairs commentator for the Financial Times, sat down with Richard Haass to talk about how the United States should navigate an uncertain world. (Joe has a new book, The Future of Power. I highly recommend it.) You can listen to the audio or watch the full-length video. In the clip below, Nye and Rachman discuss the free-rider problem in military spending discrepancies between the U.S. and other nations.

Read of the Week. If you are debating whether to buy a copy of former Defense Secretary Don Rumsfeld’s new memoir, Known and Unknown, the Wall Street Journal has kindly provided excerpts. As you might have heard, Secretary Rumsfeld was not a fan of the way Condoleezza Rice ran the National Security Council process. I look forward to reading what her memoir has to say about Secretary Rumsfeld’s stewardship of the Defense Department.

Blog Post of the Week. With February 14 just around the corner, David Rothkopf takes a devilish twist on Valentine’s Day and comes up with “Bad Romance: Ranking Obama’s Most Difficult Relationships.” Rothkopf’s exact rankings matter less than the fact that Obama has so many problematic relationships to deal with. Call it the downside to being president. (By the way, Rothkopf’s title is, intentionally or unintentionally, a search engine optimization masterpiece. People looking to know why their last relationship went south are going to stumble onto a discussion of U.S.-Pakistani relations. We call that broadening the audience.)

Poll Question of the Week. While many experts worry about what political turmoil in Egypt means for the region and U.S. interests, the American public sees better days ahead. Gallup finds that two out of three Americans think that the political protests will be “mostly good” for Egypt, and six in ten think that political change in Egypt will be “mostly good” for the United States. This is nothing new. Whether it was the French revolution in 1789, the Greek uprising against Turkish rule in the 1820s, the Cuban insurrection in the 1890s, or Egypt today, Americans have long had an unbridled faith in what revolutions can produce. It’s our civic religion and is ground in our unique origins. Too bad that we don’t know how to bottle our success.

Chart of the Week. Demography may not be destiny, but it matters a lot. Just think of how baby boomers changed American society. In the case of the recent uprisings in Tunisia and Egypt, a so-called youth bulge is confronting economies that do provide too little opportunity, as the chart below shows. Frustration and anger are the result. (While youth unemployment in the United States might seem high, that unemployment is largely cyclical—reflecting the consequences of the recent recession—rather than structural—that is, not changing—as in much of the Middle East.) The question for Egyptians, Tunisians, and societies in a similar situation is whether that frustration and anger can be channeled into agreement on what to do to fix their countries’ problems. 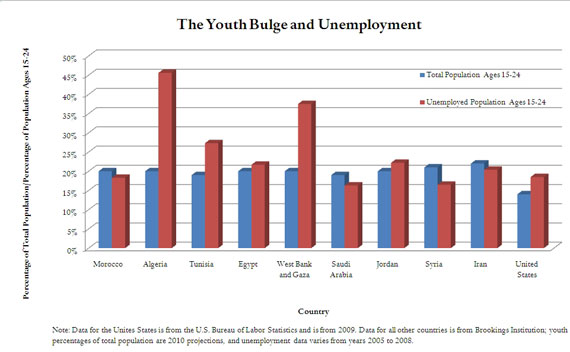 Too Good Not to Note. All things Egypt continue to dominate the blogosphere. Elliott Abrams laments President Obama’s indecisive handling of the crisis and his failure to say anything to inspire the protesters. Marc Lynch argues that President Obama is pushing for change in Egypt. Nick Burns channels his experience as undersecretary of state for political affairs—called “P” by those in know and the third ranking job at State—to express sympathy for the delicate tightrope Obama is trying to walk. Josh Kurlantzick asks whether Egypt might follow the path of Indonesia, which has moved from dictatorship to democracy. Nate Silver assesses the political risks to President Obama that come with having Hosni Mubarak ignore his demands for change “now.” In a bit of counter-programming, my old boss at the National Security Council, Richard A. Clarke, delves into the brave new world of cyberwar.

Perils of Prediction. “No matter what happens, the U.S. Navy is not going to be caught napping.” Secretary of the Navy Frank Knox, December 4, 1941.

Quote to Ponder. “In this world there are only two tragedies. One is not getting what one wants, and the other is getting it.” Oscar Wilde.

A Reason to Smile. Valentine’s Day.

The World Next Week: Dollars for Defense

Is Puerto Rico Back on a Path Toward Debt Sustainability?