Above the Fold. Speaker of the House John Boehner and Senate Minority Leader Mitch McConnell both say that the United States must avoid a debt default; Senator McConnell has gone so far as to propose a complex mechanism by which President Obama could raise the debt ceiling and Republicans could cast symbolic (and almost certainly meaningless) votes against it. But members of what National Public Radio has dubbed the "Hell No Caucus" in the House dismiss default as unlikely or no big deal. Their adamant opposition to raising the debt ceiling prompted House Majority Leader Eric Cantor to say this week that “nothing can get through the House right now.” Perhaps this is just run-of-the-mill posturing. Or perhaps a default is no big deal. But I decided long ago that there are several things I am not interested in learning. One is whether airbags work. Another is whether it is truly dangerous to stand under a tree during a lightning storm. A third is how Ohio State fans will react if you cheer for Michigan when the two teams play football in Ohio State’s stadium. To this list I would add discovering the consequences of defaulting on the U.S. public debt.

CFR Event of the Week. It has been another quiet week here at CFR, so we dip back into the archives. While the wrangling over the U.S. debt ceiling is stirring jitters in markets here at home, investors are also getting nervous over signs that the Eurozone’s debt problems continue to grow. Last month Olli Rehn, commissioner for economic and monetary affairs for the EU, sat down at CFR with Steven L. Rattner, lead auto adviser at the Department of Transportation, to discuss the Eurozone’s problem and future. You can listen to the audio or read the transcript.

Read of the Week. The U.S. General Accountability Office has created a website that will tell you everything you need to know about the U.S. national debt. With the exception of a brief moment in the 1830s, the U.S. government has run a debt since it first began operation. (At Alexander Hamilton’s insistence, the government formed by the Constitution assumed Revolutionary War debt.) If you master this website you will dominate all cocktail and barbeque party conversation this weekend.

Blog Post of the Week. David Rothkopf wonders why so many elected officials in Washington seem to have lost “all sense of context or consequences or their most basic responsibilities.” I’m wondering the same thing.

Poll Question of the Week. An Economist/YouGov Poll asked Americans “how serious a problem would it be for the economy if the U.S. government defaulted on its debt?” Three quarters thought it would be either “very serious” or “somewhat serious.” So it follows that Americans by a similar margin favor raising the debt ceiling, right? After all, there is no prospect that the U.S. government will balance its budget any time soon. Even House Budget Chairman Paul Ryan’s budget proposal, which House Republicans have formally endorsed, would add to the national debt for years to come. But the Economist/YouGov Poll found that only 29 percent of Americans say yes to raising the debt ceiling, while 45 percent say no. The numbers are even more lopsided among Republicans, with only 9 percent favoring a higher debt ceiling and 74 percent opposing it. As I have mentioned before, the public’s expressed preferences are often contradictory. Sometimes that’s because people don’t understand the contradictions in their positions. At other times it’s because the question that pollsters are literally asking is not the question that people are answering. My best guess is that the latter is the case on the debt ceiling. People aren’t saying they want the White House and Congress to wreak havoc on the economy. They are saying that they want the government to stop the flow of red ink. On that score neither party has put a workable plan to balance the budget on the table.

Chart of the Week. The chart below, which is based on another poll question that the Economist/YouGov Poll asked, tells you all you need to know about why it has been so hard for Washington to negotiate a deal on raising the national debt ceiling even though every political leader says it needs to be done. Republicans value sticking to principles over compromising by a wide margin. That means Democrats who want a deal may be looking at capitulation rather than compromise, which can be a tough sell with their constituents. 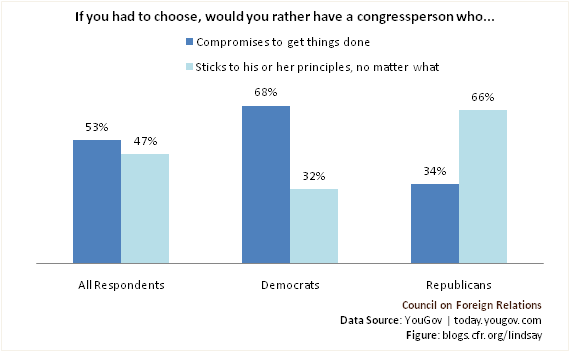 Too Good Not to Note. Liz Economy thinks it is time for the United States to learn from China when it comes to doing business. Adam Segal discusses how imported software and hardware may come with malware embedded in them. Josh Rogin wonders whether Hillary Clinton will announce during her visit to Turkey that the United States is recognizing Libya’s Transitional National Council. Dan Drezner reminds us that “gut-level foreign policy usually doesn’t work.” Nate Silver musters more evidence that first-term Republicans have pulled the House of Representatives sharply to the right. NBC News’ “First Read” parses the lessons of Senator McConnell’s “Plan B” to avoid a debt default and stick President Obama with the blame for raising the debt ceiling.

Perils of Prediction. “Bear Stearns is fine!” Mad Money host Jim Cramer, March 11. Actually, no. Bear Stearns was saved from bankruptcy only when JP Morgan Chase agreed to buy it at a fire-sale price.

Quote to Ponder. “Insanity in individuals is something rare—but in groups, parties, nations and epochs, it is the rule.” Friedrich Nietzsche

A Reason to Smile. Air conditioning.