Above the Fold. Most presidential elections turn on domestic issues rather than foreign policy ones. The 2012 election probably won’t be any different. Jobs and the economy top the list of issues voters are worrying about these days; hence, the Economist cover story this week that the sluggish recovery could doom President Obama’s re-election chances. But rough economic times and a sea of government red ink could turn 2012 into an election that has profound consequences for U.S. foreign policy. A Pew Research Center poll out today shows that the percentage of Americans who agree that the United States “should mind its own business internationally” stands at 46 percent, three percentage points short of its historic high. Meanwhile, 46 percent of Americans also say they want the United States to reduce its military commitments overseas. That’s twenty percentage points higher than a decade ago, and surprisingly, Republican attitudes on these questions look a lot like Democratic attitudes. The critical question, of course, is whether any presidential candidate will attempt to tap into the “do less, not more” sentiment. Monday night’s GOP presidential debate at St. Anselm’s College in Manchester, New Hampshire could be telling on that score. Watch what Michele Bachmann has to say. She has been sounding a lot less like George W. Bush and lot more like Robert Taft in her recent foreign policy pronouncements. Her strong views and talent for framing issues might push the Republican presidential conversation in an unusual direction.

CFR Event of the Week. In New York this week the UN General Assembly held a high-level meeting on HIV/AIDS, exactly thirty years after reports first started surfacing of gay men living in Los Angeles suffering from what then was an unknown disease. To mark the anniversary, CFR brought together Michelle Bachelet, former president of Chile and current undersecretary general and executive director of UN Women, Paul De Lay, deputy executive director of UNAIDS, and Robert Orr, assistant secretary general for strategic planning at the UN to discuss the history of the epidemic, evaluate progress in treatment and prevention, and think through next steps in combating the disease. You can read the transcript, watch the video, or download the audio to go. My colleague Laurie Garrett also taped a short interview about the epidemic’s anniversary:

Read of the Week. Slate’s Fred Kaplan assesses the issues at play in the Obama administration’s third review of U.S. strategy in Afghanistan. It all comes down to two key questions: Is the failure to build a stable and effective civilian government in Afghanistan preventing the United States from turning its impressive tactical successes on the battlefield into a lasting strategic success? If so, what should the United States do?

Blog Post of the Week. David Rothkopf hails Robert Gates as perhaps America’s finest defense secretary but thinks he is making one final error on Afghanistan. Paul Miller argues that Rothkopf is wrong, not on Gates, but on Afghanistan. Rothkopf looks to have the better of the argument.

Poll Question of the Week. What if you want to help someone but they don’t want it? That question is prompted by a recently released Gallup Poll that asked Egyptians, “Do you favor or oppose the U.S. sending aid to political groups in Egypt?” Three-quarters of Egyptians said no. What may be most surprising is that opposition to U.S. aid to Egyptian political groups stands even higher among Egyptians who see the United States as a political model for Egypt—88 percent say no. So the message from Egypt seems straight forward: Butt out.

Chart of the Week. Today’s New York Times reports that U.S. companies are investing in equipment and not workers. The disparity is significant. As the chart below shows, the U.S. economy is larger now than before the recession began but the total number of non-farm jobs still lags behind the level it stood at in 2007. That is what a jobless recovery means. The tough numbers on the employment front are a political problem for President Obama and they help fuel political sentiment across the country that the United States needs to do more at home and less abroad. 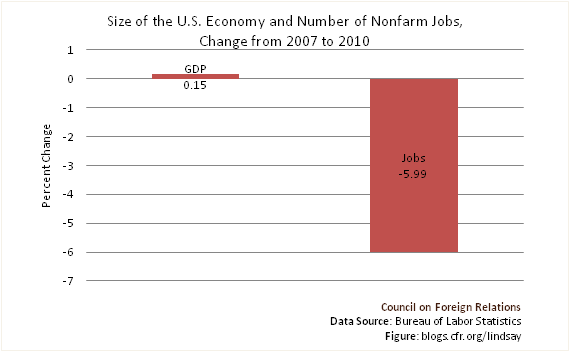 Too Good Not to Note. Jack Goldsmith wonders whether President Obama’s original legal justification for the war in Libya is still valid. Michael Warren looks at House Budget Committee Chairman Paul Ryan’s (R-Wis.) recent speech on foreign policy. Steven Cook explains what is at stake in Turkey’s election this weekend. Shannon O’Neil says that the conventional wisdom that Brazil is an opportunity and Mexico a problem isn’t quite right. Nate Silver thinks that poll numbers indicate that former Utah Gov. Jon Huntsman is an unacceptable candidate to many in the Republican base. Nate also asks if the answer to a ten-word question will sink President Obama’s re-election chances.

Perils of Prediction. “George, you’re supposed to be one of the smartest guys in town, but you’re crazier than hell.” President John F. Kennedy’s assessment in November 1961 of Undersecretary of State George Ball’s claim that if Kennedy sent more U.S. military advisers to South Vietnam that the United States could “have 300,000 men in the paddies and jungles [of South Vietnam] and never find them again.” The United States had 369,000 troops in South Vietnam at the end of 1966.

Quote to Ponder. “Always do right. This will gratify some people, and astonish the rest.” Mark Twain, to the Young People’s Society, Greenpoint Presbyterian Church, Brooklyn, New York, February 16, 1901.

A Reason to Smile. Beating your arch-rival for the eighth time in nine tries.