Above the Fold. Just three days after delivering a State of the Union Address that skated over foreign policy problems, President Obama faces one of his toughest diplomatic challenges yet—how to respond to growing political turmoil in Egypt. Thousands of Egyptians battled heavily armed riot police across Cairo today in what has been dubbed “the Friday of Wrath,” and the protests show no signs of stopping. Should Obama stand by the regime that has been a pillar of America’s Middle East policy for three decades and risk ending up on the losing side of history? Or should he live up to his pledge in the State of the Union speech that America “supports the democratic aspirations of all people” and risk antagonizing a key ally that has in the past put down threats to its hold on power? The administration has responded so far as most do when faced with uncertainty and risk: it is trying to keep all options open. Vice President Joe Biden insists that Hosni Mubarak is not a dictator and Secretary of State Hillary Clinton says that Egypt is stable. Meanwhile, White House and State Department spokespeople say that the U.S. government is not taking sides in the matter—not quite the endorsement that the Mubarak government wants to hear—and urging the Egyptian government to adopt reforms. But fast-moving events could force the administration off the fence and into a choice. That choice won’t determine what happens in Egypt; the Egyptian people will decide that question. But whether Obama chooses wisely will determine whether American interests in the region, which are complex and at times contradictory, are advanced or deeply damaged.

CFR Event of the Week. U.S. spending on foreign aid will almost certainly be slashed this year, and reasons abound to doubt its effectiveness in promoting economic development in any event. Trade can stimulate economic growth and lift millions out of poverty, but neither President Obama nor Congress shows much interest in moving ahead on the free-trade front. So perhaps it’s time to consider “out-of-the-box” ideas on how to help poor countries. Stanford University economist Paul Romer has one such an idea: “Charter Cities”--unique reform zones started from scratch in a host country and governed by special rules designed to promote growth. Romer sat down this week to discuss the idea with Sebastian Mallaby, the director of CFR’s Maurice R. Greenberg Center for Geoeconomic Studies. You can read the transcript, watch the video, or listen to the audio. In the clip below, Paul Romer discusses options for funding "Charter Cities."

Read of the Week. My colleague Rob Danin spent his time immediately before joining CFR as head of the Office of the Quartet Representative, which translates into every day English as “Tony Blair’s deputy in the effort to persuade the Israelis and the Palestinians to strike a peace deal.” Earlier this week, Al Jazeera leaked more than 1,600 internal Palestinian communications summarizing what Palestinian negotiators had offered to the Israelis over the past decade. In an article for foreignpolicy.com, Rob details why the leak will throw another obstacle in the way of Middle East peace and offers advice on how the Palestinian leadership can turn this lemon into lemonade.

Blog Post of the Week. Marc Lynch lists the many reasons why a savvy Middle East analyst should dismiss talk of how Tunisia’s Jasmine Revolution will sweep the region’s other autocracies from power. Nonetheless, he can’t shake the sense that the savvy analysis is wrong. The protests in Egypt and Yemen suggest that something different and profound is in the air in the Arab world.

Poll Question of the Week. With the exception of foreign aid, are there any categories of federal spending that you would favor cutting? No polling organization actually asked that question. But the answer that can be pieced together from recent polls by Gallup, CNN, and CBS/New York Times on what the public thinks about proposed cuts to specific types of spending such as Social Security, Medicare, and education. And that answer is an emphatic, "No!" So a fair reading of the polls suggests that the public’s thinking is: 1.) We want the federal budget deficit reduced. 2.) We oppose raising taxes. 3.) We are for cutting federal spending. 4.) Except for cuts in programs that constitute 99 percent of federal spending. Sorry, those four preferences are, to borrow the lovely social science term, “inconsistent.” President Obama made a passing attempt to educate the public about the realities of the federal budget when he noted during the State of the Union that non-defense discretionary spending accounts for about 12 percent of spending. I doubt that many people heard him. The Republican responses to the State of the Union sidestepped the problem entirely. None of this augurs well for solving the deficit problem before the bond market makes us solve it.

Chart of the Week. Nearly 43 million Americans watched the State of the Union Address this week. But Democrats hoping that the speech will boost President Obama’s popularity and Republicans hoping the speech will undo it, are both likely to be disappointed. Nate Silver looked at how presidential approval ratings have changed following the forty-two State of the Union addresses given since 1962. His answer? Not much. A president’s approval rating has increased by more than four percentage points only four times, and it has decreased by more than four percentage points only five times. (Gallup makes the same point looking at all State of the Union addresses since 1978.) So the political fight continues. 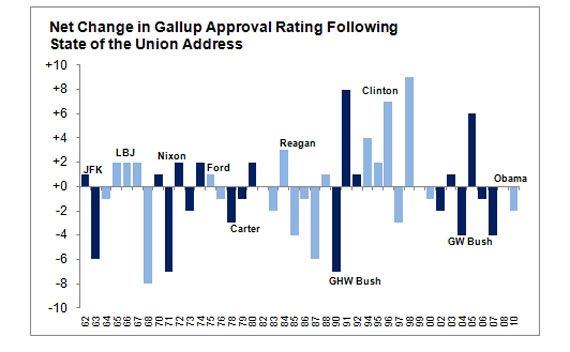 Too Good Not to Note. This is Davos week, but after reading Andrew Ross Sorkin’s column on the cost of attending Davos, I’m glad I stayed at home where I could watch it snow for free. John Cassidy of the New Yorker argues that the dynamics of the looming budget battles favor Obama and his reelection in 2012. Andrew Exum (writing under the pseudonym of Abu Muquwama) argues that President Obama’s call for elite universities to allow ROTC programs back on campus will be hard to meet because of the military’s reluctance to be on these campuses. Cheryl Miller of the American Enterprise Institute says “Ditto!” Laura Rozen recaps the failure of the Iran nuclear talks in Istanbul.

Quote to Ponder. “Many men talk like philosophers and live like fools.” Philip K. Dick, “Beyond Lies the Wub.”

A Reason to Smile. Beating your in-state rival on their home court for the first time in twelve tries. Go Blue!

The World Next Week: South Sudan and the Birth of a Nation