Above the Fold. The bipartisan spirit that emerged in the country after the killing of Osama bin Laden has now officially evaporated. The five men who showed up in Greenville, South Carolina last night for the first GOP presidential debate began by congratulating Barack Obama for bin Laden’s death and then spent the rest of the night pummeling the president’s purported failures. Herman Cain, who could teach his rivals for the nomination a lot about how to command the stage, put the point succinctly: “One decision doth not a presidency make.” Ron Paul drew the most applause over the course of the evening, and especially for his call to withdraw all U.S. troops from Afghanistan. Who knows whether that reflected genuine sentiment in South Carolina or the fact that Paul’s enthusiastic followers packed the auditorium. Tim Pawlenty let everybody know that he made a mistake, he really did make a mistake, when he once endorsed cap-and-trade legislation as a way to reduce greenhouse-gas emissions. What Pawlenty would do about the very real threat of climate change he didn’t say. And that was the problem with the debate. The candidates did a lot of complaining about Obama, but they said little about how they would solve the many foreign policy challenges the United States faces. The at times inane questions that the Fox News pundits asked didn’t help things. (Gary Johnson was asked if he could be on a reality TV series, what would it be? He was stumped for an answer. Who could blame him?) In all, at the conclusion of the night’s festivities it was easy to see why the chairman of the Republican National Committee said before the debate began: “As we all know, there are numerous other candidates that are looking at [running]—and thank God.”

CFR Event of the Week. Barack Obama wasn’t the only national leader in Manhattan on Thursday. Ireland’s new Taoiseach (Prime Minister), Enda Kenny, was also in town. He dropped by CFR and discussed terrorism in Ireland and around the world, the elections in Northern Ireland, and the relationship between the Irish Republic and Northern Ireland. CFR President Richard Haass, who helped negotiate an end to the “Troubles,” moderated the discussion. You can watch the video or download the audio to go.

Read of the Week. Eric Schmitt and Thom Shanker have a fascinating piece in today’s New York Times about how close the Bush administration came to getting bin Laden back in the late summer of 2007. Their recounting of that near miss makes the Obama administration’s success earlier this week look all the more impressive. You need to get a lot of things right, and then get a dash of good luck, to pull off a covert operation like this.

Blog Post of the Week. Gabor Rona, Ken Anderson, and Bobby Chesney offer different arguments defending the legality of killing Osama bin Laden even though he was unarmed.

Poll Question of the Week. CNN asked Americans, “Do you think Osama bin Laden is in Hell, or don’t you think so?” Sixty-one percent said "Hell." The remaining 39 percent broke down as follows: 24 percent had “No opinion”; 10 percent said “Not in Hell”; and 5 percent said “Hell does not exist.”

Chart of the Week. Presidential press conferences on the killing of the world’s foremost terrorist attract a big television audience, even when they begin at 11:30 PM EDT. 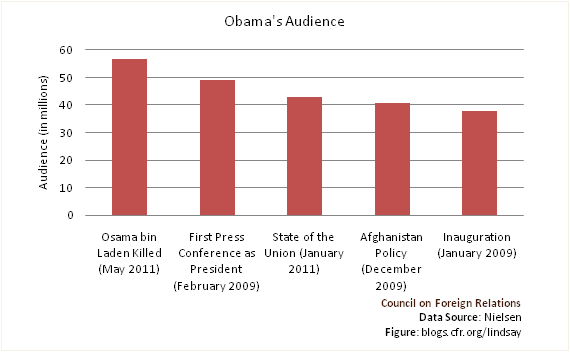 Too Good Not to Note. Ezra Klein details Osama bin Laden’s war against the American economy. Richard Falkenrath thinks that life is about to become much more complicated for U.S. policymakers trying to combat terrorism. Mohamed Jallow looks at what bin Laden’s death means for Africa. Bobby Chesney examines the precedent that killing bin Laden might have for Indian interventions in Pakistan. Steven Cook compares the Arab Spring and the Turkish Fall. Elliott Abrams reviews the ominous news coming out of Bahrain. Dan Drezner offers up three books he thinks that any aspiring politician should read.

Perils of Prediction. “Rail travel at high speed is not possible, because passengers, unable to breathe, would die of asphyxia.” Dr. Dionysius Lardner (1793-1859), professor of Natural Philosophy and Astronomy, University College London. Thank goodness that Dr. Lardner was wrong. I rode the Acela twice this week.

Quote to Ponder. "A mother is a person who seeing there are only four pieces of pie for five people, promptly announces she never did care for pie." Tenneva Jordan.

A Reason to Smile. Moms. Without them we wouldn’t be here. Love you, Mom!