Above the Fold. The ringing you heard today is the timer expiring on the War Power Resolution’s sixty-day clock. Back on March 20, President Obama notified Congress, as the resolution requires, that U.S. forces had launched Operation Odyssey Dawn. The resolution has been President Obama’s strongest argument that he has the legal authority to initiate hostilities; the law effectively gives presidents sixty days to use force without congressional authorization. So Obama now has to fall back on dubious claims of presidential authority based on past practice, which are far weaker than his lawyers admit, or semantic dodges (e.g., it’s NATO and not the United States fighting, small wars and drone strikes don’t count) that don’t withstand scrutiny. So while Obama once argued that “the president does not have power under the Constitution to unilaterally authorize a military attack in a situation that does not involve stopping an actual or imminent threat to the nation,” he is establishing a precedent that future occupants of the Oval Office could use to justify just that. But Obama is not the only one to blame. It’s ultimately up to Congress to defend its war powers. The courts are not going to do the job for it. But so far Congress hasn’t shown much interest in standing up for itself. While the WPR clock rings, the House is on recess. Sen. Richard Lugar, the ranking Republican on the Senate Foreign Relations Committee, has called for a “specific resolution that would give [the president] authority.” So far, however, few lawmakers are jumping on his bandwagon.

CFR Event of the Week. My Nobel Prize-winning colleague A. Michael Spence has a new book out, The Next Convergence: The Future of Economic Growth in a Multispeed World, which looks at the future of the world economy as new players enter the scene. This week, Mike discussed the book’s major concepts—globalization and the rapid "rise of the rest"—at CFR. You can listen to the audio of Mike’s preview of where our economy is headed, or you can watch the full video.

Read of the Week. Earlier this week Dan Markey’s guest posts on the mood in Pakistan post-Abbottabad and on the prospects for using the threat of ending U.S. aid as a lever to force changes in the Pakistani military. Dan used the flight back from Pakistan to draft a policy innovation memorandum on the current crisis in U.S.-Pakistani relations and what the United States needs to do to create a more effective working partnership with Islamabad.

Blog Post of the Week. John Deutch, a former CIA director and deputy secretary of defense as well as a long-time MIT professor, challenged his friend Joe Nye to use his prodigious analytical talents to explain the breakdown of governance in the United States and what can be done about it. Joe’s response is a lock to be a future blog post of the week. Do you agree with Professor Deutch that we are witnessing a governance breakdown in the United States, and if so, what would you do about it?

Poll Question of the Week. Most Americans think that someone in the Pakistani intelligence services must have known that Osama bin Laden was living in Abbottabad. It turns out, according to a new Gallup poll, that three of ten Pakistanis who have heard of the U.S. military operation agree. A near majority (49 percent) of Pakistanis who have heard of bin Laden’s killing don’t think that the Pakistani intelligence services knew anything. These results raise an interesting question: Are Pakistanis in either camp happy with their conclusion? 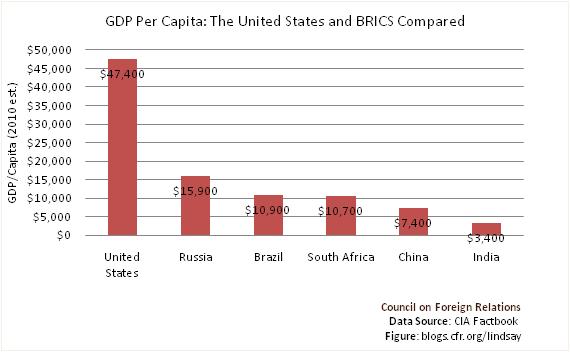 Too Good Not to Note. Nick Kristof reveals what the late Ambassador Richard Holbrooke thought about the shortcomings in U.S. policy in Afghanistan. Ezra Klein looks at a way to maximize efficiency in foreign aid. Michael Levi explores one neglected reason why Americans and Europeans have trouble cooperating on climate change issues. Walter Russell Mead extols the brilliance of Carl Philipp Gottfried von Clausewitz and laments the fact that he is so seldom read today on university campuses. Liz Economy asks three deceptively simple questions about talk of the “rise of the rest.” How would you answer them?

Perils of Prediction. “Today’s election is poised to end the Republican era in American politics—an era that began in reaction to Lyndon Johnson’s Great Society, the Vietnam war and the civil rights revolution, was pioneered by Richard Nixon, consolidated by Ronald Reagan, and wrecked by George W Bush.” Sidney Blumenthal, The Guardian, November 4, 2008.

Quote to Ponder. “Those who make peaceful revolution impossible make violent revolution inevitable.” President John F. Kennedy in an address to the diplomatic corps of the Latin American republics, March 13, 1962.

A Reason to Smile. The senior prom.

The World Next Week: Obama Diplomacy in High Gear

The President's Inbox: Should the United States Leave Afghanistan?

Other Nations Have Been Putting Women in Charge. Where's the United States?