Above the Fold. Chinese President Hu Jintao comes to Washington next week for his first visit since 2006. (The Washington Post has fashion advice for those of you attending next Wednesday’s state dinner.) Don’t expect much to come out of the trip. President Obama has little to offer that the Chinese want, and President Hu is either disinclined or unable to offer much in return. [Sorry Secretary Geithner.] China’s new-found confidence—or aggressiveness, if you prefer—in the wake of its impressive recovery from the global financial crisis has attracted a lot of comment. But just as important in understanding Beijing’s behavior is that Hu is a Peking lame-duck.  He is out the door next year, and no one in China’s leadership wants to be seen as too friendly with Washington while things shake out in Beijing. [Yes, there is a parallel here to what happens in American politics during election years—politics is politics.] The leadership of China’s People’s Liberation Army looks increasingly to be acting independently of China’s political leadership. It tested the top-secret J-20 stealth fighter just before Secretary of Defense Bob Gates met with President Hu in Beijing earlier this week. Hu was unprepared for Gates’s questions about the test flight, suggesting he wasn’t aware it had occurred. All this suggests that U.S.-Chinese relations could be difficult until China’s leadership transition is finished.

CFR Event of the Week. The debate over the New START Treaty didn’t satisfy your urge for discussing arms control? I have an event for you. Rose E. Gottemoeller, Assistant Secretary of State for Arms Control, Verification, and Compliance, Steven Pifer, Senior Fellow and Director of the Arms Control Initiative at the Brookings Institution, and Micah Zenko, Fellow for Conflict Prevention at CFR, sat down yesterday to discuss next steps in U.S. and Russian nuclear cooperation. You can read the transcript, watch the full video, or listen to the audio.

Read of the Week. Chrystia Freeland writes in the Atlantic that the rise of the “winner-take-all” economy has created a new global super elite whose members often have more in common with each other than with their own countrymen and women. Does it matter for the health of our democracy that a hedge fund manager living on the Upper East Side of Manhattan can navigate the streets of Davos but cannot find the Bronx? I suspect it does, but it’s only one of many trends making us feel less rather than more united as a country. In any event, the question has sparked some debate, with Dan Drezner, Kevin Drum, and Felix Salmon among others weighing in.

Blog Post of the Week. Josh Rogin reports that conservative activist Grover Norquist wants to build a center-right coalition to advocate reducing the U.S. troop commitment to Afghanistan in order to save taxpayers money. Keep an eye on this effort, and especially whether any potential GOP presidential candidate (besides Ron Paul, who has been arguing this for years) takes up the cause. Sarah Palin is arguing exactly the opposite. A conservative push to do less in Afghanistan would change the debate in Washington and create political room for President Obama to stick to his original plan to begin withdrawing troops this summer.

Poll Question of the Week. The Pew Research Center for the People & the Press just released a survey examining American attitudes toward China. The big news is that 58 percent of those surveyed consider it “very important” for the United States to “build a stronger relationship with China” and 53 percent consider it “very important” to “get tougher with China on trade and economic issues.” President Obama will need skill and luck to reconcile those two conflicting objectives.

Chart of the Week. There are just 211 days until the Ames Straw Poll, a critical early event on the road to the Republican presidential nomination. Winning the Ames Straw Poll—which not surprisingly is held in Ames, Iowa—doesn’t guarantee the nomination—Mitt Romney won it in 2007—but it certainly helps. Doing well in the straw poll demonstrates appeal, attracts news coverage, and gives donors a reason to contribute. Normally at this point in the campaign cycle several candidates have already thrown their hats in the ring. For a variety of reasons, this time around everyone is waiting to see who goes first. Gallup recently polled Republicans and Republican-leaning independents to see how they view the field of potential candidates. Sarah Palin is the most widely recognized—no surprise there—and Mike Huckabee has the highest net favorability (highest favorability minus highest unfavorability among those who recognize the candidate). Gary Johnson and Mitch Daniels look to be the long shots. Gallup didn’t ask about Florida Senator Marco Rubio or New Jersey Governor Chris Christie, both of whom have prompted considerable buzz among conservative activists, or about Michele Bachmann and John Bolton, who haven’t. Gallup also didn’t ask about Donald Trump, who promises to decide whether to dive into the race after the current season of his TV show, The Apprentice, wraps up in late spring. America awaits with bated breath. 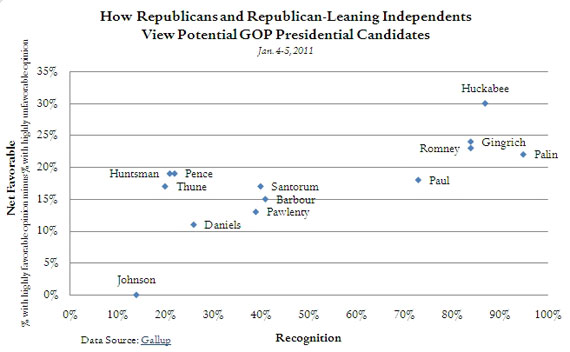 Too Good Not to Note. Joshua Green profiles Senate Minority Leader Mitch McConnell. Andrew Bacevich recalls President Dwight Eisenhower’s warning about the military-industrial complex. Tim Kane looks at a survey of West Point graduates to understand why our best officers are leaving. (Yes, all three articles are from this month’s issue of the Atlantic. What can I say? A great issue.) Josh Rogin examines what President Hu’s likely successor thinks about “well fed foreigners.”

Perils of Prediction. “Only hysteria entertains the idea . . . Japan contemplates a war upon us.”  John Foster Dulles, future secretary of state, 1941.

A Reason to Smile. Only 233 days until another season of college football begins.