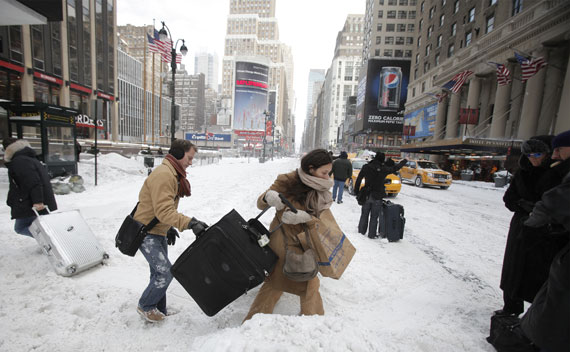 Above the Fold. President Obama had the right idea in heading off to Hawaii. I opted for Boston and was rewarded with 20-plus inches of snow. That would have been great if I liked to ski or shovel sidewalks. But neither appeals to me much. So I used my time being housebound to read Edward Gibbons’s The Decline and Fall of the Roman Empire. Retrenchment, renewal, and revival will be big themes in American politics in 2011 as past and present practitioners, business leaders, and scholars alike increasingly worry about the deteriorating foundations of American power. So I thought reading Gibbon’s might lead me to blinding new insights into America’s current predicament. I can’t say it has. What reading Gibbons makes clear is that leadership matters (The Romans had some truly awful emperors) and that it’s very difficult to overcome vested interests, even when the policies they are defending are disastrous.

CFR Event of the Week. The past year produced a lot of great talks at CFR. One of my favorites was by Secretary of Education Arne Duncan in October. Human capital, as economists like to put it, is crucial to economic growth, and there is good reason to worry that we are doing a poor job building ours. You can read the transcript of Secretary Duncan’s address, watch the full video, or listen to the audio. In the clip below, he discusses how education plays an integral role in America’s competitiveness:

Backgrounder of the Week. One upside to a blizzard is that you temporarily shelve your complaints about airport security. You just want a seat on a plane that will get you where you want to go. But (fingers crossed) air travel should return to normal next week, and you can read the new CFR backgrounder on airport security while you wait to go through the scanners at your favorite airport.

Read of the Week. John Mearsheimer weighs in on the pages of the National Interest with his indictment of post-cold war American grand strategy. Anyone familiar with John’s writings won’t be surprised that he gives it two thumbs down. He wants a more modest grand strategy based on the idea of off-shore balancing. (Time to call in Don Draper for a rewrite. OSB no doubt sounds beautiful to academic ears; to everyone else, not so much.)

Blog Post of the Week. Dan Drezner writes that John Mearsheimer relies more on assertion than evidence to make his case that America’s recent grand strategy hasn’t worked. Dan’s post either implicitly or explicitly poses several tough questions that merit a thorough airing: What is our current grand strategy? What is its cost-benefit ratio? Do we want a “do less” or “do differently” foreign policy? What would a “do less” foreign policy look like? How sure are we that it would actually serve U.S. interests?  How would we get from where we are today to where we want to be? The last question goes to the domestic politics of American foreign policy. Can a Democratic president, especially one whose “toughness” is debated by his political friends and foes alike, lead a major overhaul of American foreign policy. Or to take a page out of the “Nixon-goes-to-China” playbook, do major changes in the nature and direction of American foreign policy require a Republican president?

Poll Question of the Week. President Obama’s overall approval rating stands at 47 percent in the latest Gallup Poll, which is about where his rating has been for the last year. So his successes in the lame-duck session didn’t generate a “bump.” That’s not surprising. Don’t expect Obama’s ratings to rise until the unemployment rate begins to fall. It’s all about jobs.

Chart of the Week. The price of a barrel of oil now stands around $90. That’s up from about $75 at the end of August and it’s why I just paid $3.39 a gallon for regular gas. I am old enough to remember the oil crises of the 1970s and pledges by Democratic and Republican presidents to wean Americans off foreign oil. As the chart below shows, that isn’t what happened. 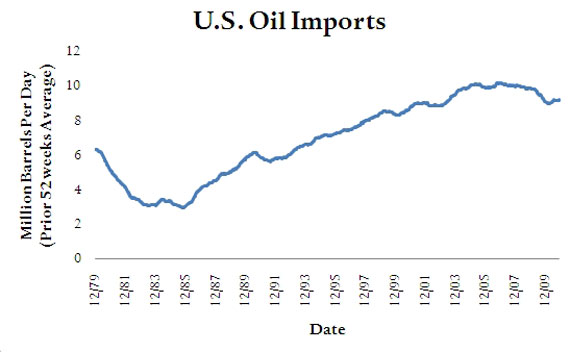 Too Good Not to Note. Laura Rozen reviews the White House’s recess appointments for envoys to Ankara, Baku, Damascus, and Prague. Josh Rogin surveys the post-game spin on the New START vote. Shadow Government offers up its across-the-aisle advice to President Obama. Nate Silver takes some of the air out of the recent burst of optimism about President Obama’s chances in 2012.

Perils of Prediction. “There is a high probability that the collapse of the United States will occur by 2010.” Russian Foreign Ministry Diplomatic Academy Dean Igor Panarin, March 3, 2009

Quote to Ponder. "When I can look at your zip code and tell whether or not you’re going to get a good education, something is really wrong." Former Secretary of State Condoleezza Rice, December 10, 2010.

A Reason to Smile. The IPad.