Above the Fold. Defense Secretary Robert Gates gave a valedictory speech to NATO members last week in Brussels. His message was pointed: NATO faces “the very real possibility of collective military irrelevance.” Gates has despaired about NATO’s future before, so last week’s frustrations are neither new nor surprising. Reactions in Europe to Gates’s remarks have been mixed. Some Europeans found it ungenerous given that they “honourably joined the US after 9/11 in its costly Afghan war on the ‘all-for-one’ principle, although no other state had then been attacked.” Other Europeans believe that Gates “was far too nice about NATO’s failings.” The question of NATO’s relevance isn’t going to go away. Europe’s fiscal problems and demographics make it likely that European defense spending will fall rather than rise. Meanwhile, sentiment on this side of the Atlantic continues to grow that the United States needs to rethink how it does business overseas and with whom. (Check out Richard Haass’s piece in the Washington Post’s Outlook section this Sunday on this score.) It’s still too early to perform NATO’s last rites. But the alliance is in its old age, and not everyone thinks it should search for a fountain of youth.

CFR Event of the Week. CFR hosted a symposium this week to discuss next steps in immigration reform. New York Mayor Michael Bloomberg told CFR President Richard Haass that the United States risks “national suicide” if it doesn’t change course on immigration. If Mayor Bloomberg wanted to turn heads on this important topic, he succeeded. You can watch the video, read the full transcript, or embrace another Bloomberg policy priority and throw the audio of his remarks on your MP3 player before you hit the gym. In the clip below, Bloomberg addresses the issue of high-skill visas.

Read of the Week. The White House response to Speaker John Boehner’s questions about U.S. involvement in Libya doesn’t say much about the legal authority for U.S. participation in the intervention. It does, however, provide new details about the cost and extent of U.S. military operations.

Blog Post of the Week. Jack Goldsmith dashed off a quick and informative analysis of the White House’s response to Speaker Boehner’s letter. As Professor Goldsmith has had time to reflect and as others have weighed in on the debate, he has expanded his thinking and refined it. Based on Professor Goldsmith’s writings and those from other law professors, I’d say that members of President Obama’s former profession aren’t impressed by the arguments that his lawyers are making on his behalf.

Poll Question of the Week. The most recent NBC News/Wall Street Journal poll finds that 62 percent of Americans think that things in the nation are “off on the wrong track.” That’s twelve percentage points higher than just a month ago. So the trend is going in the wrong direction. But as always, the reference point matters. Compared to the same time last year, public sentiment on where the country is headed is unchanged.

Chart of the Week. The chart below of defense spending as a share of GDP shows why Bob Gates is pessimistic about NATO. The problem is probably worse than the chart suggests. Much of Europe’s defense spending is duplicative rather than complementary. As a result, the sum is less than the total of all the parts—as we are seeing in the current operation in Libya. 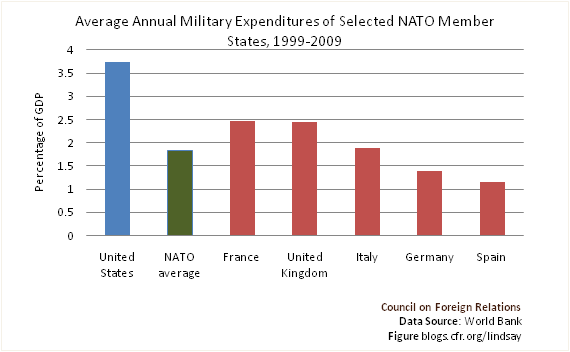 Too Good Not to Note. Rick Pildes adds to the conversation on Libya and the War Powers Resolution. James Traub thinks that the Republicans are turning inward. Spencer Ackerman looks at the CIA’s expanding drone wars. Walter Russell Mead writes that Americans have been getting foreign revolutions wrong for more than 200 years. Chris Jones of Esquire has an exclusive interview with Jon Huntsman. Matt Bai reports that some GOP insiders think that Huntsman has a one-in-five chance to win the Republican presidential nomination. Nate Silver finds that governors have a bigger advantage in presidential nomination races than you might think.

Perils of Prediction. “Using the same NHL simulation engine that accurately predicted a Stanley Cup Final showcasing the Bruins and Canucks, we simulated the 2011 Final 1,001 more times. The Vancouver Canucks won 57.2 percent of the time by a series average of 4-3.” WhatIfSports.com. May 31, 2011. So much for computer simulations. The Bruins won the series four games to three.

Quote to Ponder. “Always acknowledge a fault. This will throw those in authority off their guard and give you an opportunity to commit more.” Mark Twain.

A Reason to Smile. Watching your childhood team win the Stanley Cup.

The World Next Week: The War Powers Debate