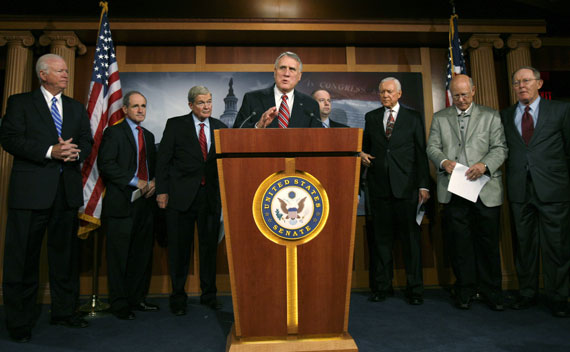 Above the Fold. It’s fish or cut bait time on the New START Treaty.  All signs point to a vote by next Wednesday.  Based on the strong vote this week to start the debate, supporters are optimistic.  Opponents are channeling their inner William Borah and vowing to fight to the bitter end—not to mention complaining that holding the debate just before Christmas is “sacrilegious” to Christians.  However the vote goes—assuming it isn’t derailed by procedural wrangling or other events—the thing to watch for is how the news media tell the final story.  If the treaty carries the day, will the theme be Obama is back, the Republicans are divided, or Democrats are wondering why the president didn’t show similar fortitude on tax policy?  Conversely, if New START goes the way of the Comprehensive Test Ban Treaty, will the theme be Obama’s weakness or Republican partisanship and obstructionism?

CFR Event of the Week. Afghanistan is leading the news with the release of the Obama administration’s new strategy review.  Yesterday, Daniel Markey, James Dobbins, and Robert Grenier discussed the findings of the CFR-sponsored  Independent Task Force on U.S. Strategy for Afghanistan and Pakistan.  You can watch the full video or listen to the audio.  In the clip below, they discuss Pakistan’s vital role in the Afghan conflict and evaluate possible American approaches for working with Islamabad.

Backgrounder of the Week. If you want to impress your friends with your arms control knowledge when you discuss the New START treaty this weekend, then explore this interactive timeline of the U.S.-Russian nuclear competition.

Read of the Week. America lost a diplomatic giant this week with the passing of Richard Holbrooke.  Many moving portraits of Ambassador Holbrooke have been written in the last few days.  More will be  written in the weeks and months to come.  For a glimpse of the man and his final diplomatic challenge, read the profile George Packer wrote last year in the New Yorker.

Blog Post of the Week. Laura Rozen talks with Iran expert Suzanne Maloney about what to make of Iranian President Mahmoud Ahmadinejad’s decision on Monday to dismiss his foreign minister and name the head of Iran’s atomic energy agency to the post.

Poll Question of the Week. Retail sales may be up and stock prices with them, but public optimism about the direction of the country is down.  An ABC News/Washington Post poll conducted earlier this week found that 67 percent of those surveyed believe that "things have gotten pretty seriously off on the wrong track."  That’s 7 percentage points higher than this past June, and it’s the highest number recorded since Barack Obama’s first month as president.  The silver lining for the White House in that dark cloud is that the public is still more optimistic about the country’s future than it was during the final days of George W. Bush’s presidency, when 82 percent thought the country was seriously off track.

Chart of the Week. President Obama pledged in his 2010 State of the Union address to double U.S. Exports by 2015.  So what are we currently selling abroad?  America’s leading exports are vehicles, electrical machinery, airplanes (including engines and parts), general industrial machines, and petroleum preparations. 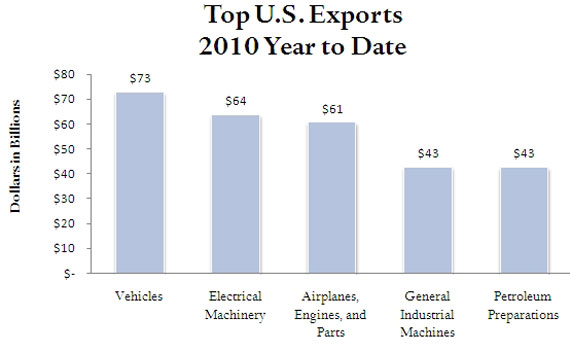 Too Good Not to Note. Michael Levi, one of the sharpest guys I know, demolishes David Owen’s argument in the New Yorker that energy efficiency means greater emissions. (Ouch!) Michael also weighs in on what Cancun means for global efforts to slow down carbon emissions.  Peter Feaver discusses President Obama’s tough choices on Afghanistan. Walter Russell Mead wonders if the L-word can be saved.  Chris Cillizza rounds up all the polls showing that Americans are a gloomy group this holiday season.

Perils of Prediction. “The horse is here to stay, but the automobile is only a novelty—a fad.”  The reason a banker gave when urging Horace H. Rackham not to invest in Henry Ford’s new motor company.  Rackham ignored the advice, and turned a $5,000 investment in 1903 into $12.5 million sixteen years later.  He gave away much of his fortune.  The Horace H. Rackham School of Graduate Studies at the University of Michigan and the building that houses it are named after him.

Quote to Ponder. “Doing nothing is better than being busy doing nothing.”  Unknown.

A Reason to Smile. The season’s first snowfall.