Above the Fold. Barack Obama, David Cameron, and Nicolas Sarkozy penned an op-ed for several European newspapers today defending the NATO mission in Libya. The three are doubling down on their commitment to oust Qaddafi—they now say that any deal that left him in power “would be an unconscionable betrayal.” This tough talk, however, sidesteps the fundamental problem with their strategy: the means they are providing fall short of the ends they desire. Air power does a poor job of protecting civilians, as the op-ed’s hot rhetoric about a “medieval siege” of Misurata implicitly admits. Air power of the sort we have seen over the past few weeks is also far from sufficient to compel Qaddafi to quit—witness his triumphant drive through the streets of Tripoli yesterday. Obama, Cameron, and Sarkozy say that NATO will keep the pressure on. And they may succeed in doing that despite the growing frictions within the alliance over Libya. But the costs of a policy of slowly tightening the noose around Qaddafi will be paid by Libyan civilians, precisely the people we are trying to protect.

CFR Event of the Week. Voters go to the polls tomorrow in Nigeria, Africa’s most populous country. (Nigeria has two-and-half times more people than Great Britain.) Goodluck Jonathan, the incumbent, is favored to win. A year ago, Nigeria’s foreign minister Henry Odein Ajumogobia dropped by CFR to discuss the Jonathan administration’s plans for reforming Nigeria. You can read the transcript of the minister’s remarks, watch the video, or download the audio to go.

Read of the Week. If America’s fiscal woes aren’t enough to keep you up at night, check out the Economist’s special report on the future of pensions. In a nutshell, people in rich countries are living much longer and their retirement programs aren’t keeping pace. Unless governments adopt major policy changes, future retirees will not be living a life of comfort.

Blog Post of the Week. CFR’s Geo-Graphics Blog offers up a simple graph to show why the White House’s budget projections should be taken with a grain of salt: they rest on rosy assumptions about future economic growth. If those projections are as overly optimistic as private sector forecasts suggest, then the president’s budget policies will produce more red ink than he is predicting. The broader point is that all budget projections are only as good as the assumptions they rest on. So when you are reading about, say, House Budget Chairman Paul Ryan’s plan to put America’s fiscal house in order, don’t stop with the headline. Keep reading to make sure the plan hasn’t rigged the outcome by assuming something fantastical, like a future unemployment rate well below anything the United States has ever sustained in the past.

Poll Question of the Week. Republicans are bickering now over whether they should back down from their no-new-taxes pledge. On that score, those who insist on balancing the budget solely through spending cuts are out of step with most Americans. Gallup asked whether next year’s budget “should or should not include higher taxes for families with household incomes of $250,000 or higher.” Six in ten Americans said it should, while four in ten said it shouldn’t. Conversely, slightly more Americans oppose “significant additional cuts in spending on domestic programs” (47 percent) than support them (44 percent). Does this mean that GOP lawmakers are about to embrace President Obama’s call for higher taxes? Nope. Because they are less interested in what the average American voter thinks than in what their fellow Republicans think. And Gallup finds that self-identified Republicans continue to tilt heavily against tax hikes and for deeper cuts in domestic spending. 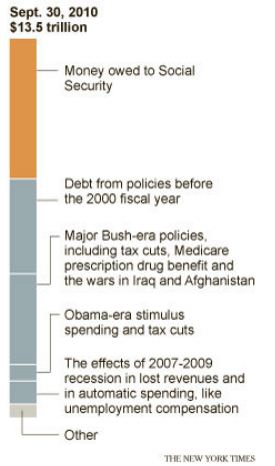 Chart of the Week. Washington’s newest hot-button topic is the upcoming vote on raising the national debt ceiling. Tea Partiers have been quick to blame President Obama’s stimulus plan for putting the country on the road to financial ruin. But our sea of red ink has been a bipartisan product long in the making, as the chart to the left shows. So I can’t blame Obama for taking a shot at Paul Ryan last night for presenting himself as a model of fiscal rectitude. After all, Ryan was, as the president said, the “guy that voted for two wars that were unpaid for, voted for the Bush tax cuts that were unpaid for, voted for the prescription drug bill that cost as much as my health care bill -- but wasn’t paid for.”

Too Good Not to Note. The Multilateralist unfairly describes my former University of Texas colleague Alan Kuperman as “the man who hates humanitarian intervention” but then to its credit gives Alan a chance to argue that he isn’t opposed to humanitarian intervention but to humanitarian interventions that do more harm than good.  The JFK School’s Power and Policy blog looks at what has changed in the year since President Obama’s much-ballyhooed Nuclear Security Summit. Michael Glennon weighs in with what’s wrong with the Justice Department’s legal defense of President Obama’s unilateral decision to launch Operation Odyssey Dawn. Josh Kurlantzick laments what the recent round of budget cuts will do to America’s ability to project soft power. Nate Silver tries to make sense of the rise of “The Donald” in the GOP presidential field. Speaking of presidential elections, John Campbell and Asch Harwood look at the simmering tensions surrounding Nigeria’s election tomorrow.

Perils of Prediction. “I stood right here at Ike’s desk and told him I was certain our Guatemalan operation [the 1954 ouster of leftist President Jacobo Arbenz Guzmán] would succeed, and, Mr. President, the prospects for this plan are even better than they were for that one.” CIA Director Allen Dulles to President John F. Kennedy on the secret plan to oust Cuban dictator Fidel Castro in early 1961. This weekend marks the 50th anniversary of the Bay of Pigs, one of the biggest fiascoes in American foreign policy history.

A Reason to Smile. Having your taxes done well before April 15.