Above the Fold. This week’s crackdown on anti-government protesters in Egypt makes clear that President Hosni Mubarak—or more accurately the regime he heads—does not intend to go quietly into the good night.  President Obama now finds himself betwixt and between, or as they say in Texas, stuck in the middle of the road with the yellow stripes and the dead armadillos. Mubarak’s supporters in Egypt, pro-Western Arab governments, and even the Israelis are grumbling loudly that Obama has unwisely abandoned Mubarak and opened the door to Islamist groups bent on destabilizing the region. Meanwhile, Obama’s effort to ease Mubarak out “now” may ultimately succeed, but it will not win him much credit with the Egyptians in Tahrir Square. Mubarak’s successor is mostly likely to be Omar Suleiman, Egypt’s long-time intelligence chief and Mubarak’s close confidante. As The Who famously sang in “Won’t Get Fooled Again”: “Meet the New Boss. Same as the Old Boss.” Sometimes being the leader of the Free World is not all it’s cracked up to be.

CFR Event of the Week. Globalized supply chains are not just for electronics anymore! Much of what we eat and many of the ingredients in the drugs we take to get or stay healthy comes from overseas. But serious questions exist about whether a globalized food and drug system provides safe food and medicine. CFR convened a diverse group of experts for a half-day symposium to discuss how globalization has changed the food and drug industries and how to guarantee consumer health. You can find transcripts, videos, and audio materials from the symposium sessions here. In the clip below, Dr. Margaret Ann Hamburg, Commissioner of the Food and Drug Administration, talks about the challenges that globalization poses for regulating the food and drug trade.

Read of the Week. Most Americans never heard of Mohamed ElBaradei before this week. Now his face is on every cable news show and newspaper front page. But last spring CFR’s Steven A. Cook was asking, “Is ElBaradei Egypt’s hero?” This is why it pays to subscribe to Foreign Affairs.

Blog Post of the Week. The Egyptian military will decide the outcome of the current political turmoil in Egypt. It is not committed to keeping Hosni Mubarak in power. It is committed to maintaining its privileged position in Egyptian society. So Steven Cook’s “Five Things You Need to Know About the Egyptian Armed Forces” is must reading. And yes, that makes Steven Cook the first person to claim “Read of the Week” and “Blog Post of the Week” in the same issue of the Friday File. He will never let me forget this.

Chart of the Week. Foreign aid is on the congressional chopping block. But which countries stand to lose out? The chart below lists the ten biggest recipients of official development assistance from the United States. These ten countries accounted for 42 percent of U.S. official development assistance in 2009.The two largest recipients, Iraq and Afghanistan, aren’t likely to see steep cuts. But the remainder of the top ten almost certainly will. 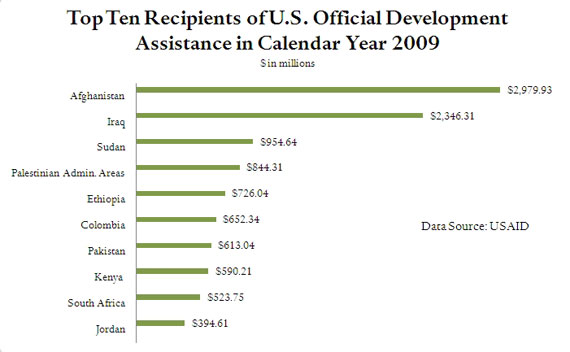 Too Good Not to Note. If you haven’t already done so, check out the new group blog Power & Policy run by the Belfer Center at Harvard’s Kennedy School of Government. When your first three posts are by Joe Nye, Graham Allison, and former Undersecretary of State for Political Affairs Nicholas Burns you immediately catapult into the “must read” category. Chris Cillizza analyzes why so many Republicans are thinking of throwing their hat in the ring for the 2012 presidential election and what it means for the GOP’s chances to reclaim the White House. Josh Rogin details how a bipartisan Senate effort to press Hosni Mubarak to move toward free and fair elections fell apart last December due to a fatal mix of divided loyalties, lobbying influence, and secret Senate holds. Josh Kurlantzick discusses Chinese views of political turmoil in the Middle East. William Saletan assesses a presidential commission’s new report on how to keep synthetic biology—which holds the promise of creating new organisms that could help on everything from better medicines to a cleaner environment—from becoming the kind of nightmare that would make Mary Shelley cringe. John Dickerson lists the nine ways Washington avoids having an “adult conversation” about the federal budget deficit.

Perils of Prediction. “Clearing and colder preceded by light snow.” Official New York City weather forecast for March 12, 1888. Snow started falling in New York shortly after midnight on March 12 and continued for a day-and-a-half. The Great Blizzard of 1888, also known as the Great White Hurricane, was one of the worst in U.S. history. New York City received twenty-two inches of snow, while upstate New York, New Jersey, Connecticut, and Massachusetts received between forty and fifty inches. Some 200 people in New York City died during the storm and its aftermath. The disaster led New York City to begin burying its power lines underground, and it spurred efforts to build an underground subway system.

Quote to Ponder. “No foreign policy—no matter how ingenious—has any chance of success if it is born in the minds of a few and carried in the hearts of none.” Henry Kissinger, 1973.