Above the Fold. Should the United States arm the rebels fighting to oust Muammar Qaddafi? After initial signs that the administration might be about to say “yes,” the administration now looks to be saying “no.” That’s the right decision. As the New Yorker’s Steve Coll argues, arming the rebels would be “wrong, unnecessary, impractical, and self-defeating.” But Obama still confronts a gap between what he wants to accomplish in Libya and what he is prepared to do. When goals exceed means, you have three choices: scale back your goals, increase your means, or live with a mess and a muddle. Obama’s demand on Monday night that Qaddafi must go makes scaling back U.S. goals unthinkable, at least for now. With arming the rebels and putting “boots on the ground” both off the table, the options for upping the means come down to covert operations or intensified aerial bombing. The former is always dicey, and the latter might do nothing more than produce the civilian casualties Operation Odyssey Dawn is intended to prevent. That leaves muddling ahead and hoping that the defection of Libyan foreign minister Moussa Koussa signals that Qaddafi’s regime is crumbling. If that doesn’t happen and Qaddafi hangs on, Obama will have a diplomatic and political mess on his hands.

CFR Event of the Week. The Arab Spring continues to capture the headlines along with the attention of world leaders. Al Jazeera’s Ayman Mohyeldin returned to CFR this week to discuss what is happening in the region with CNN’s Sam Feist. Mohyeldin discussed his experiences covering the revolutions, as well as his time as one of the few foreign journalists working in Gaza and his work as an embedded journalist with U.S. troops in Iraq. You can read the transcript, watch the video, or download the audio to go.

Read of the Week. The New Yorker’s John Lee Anderson reports on his impressions of the rebels he met in Libya. It’s a motley group of folks who are united in their desire to oust Muammar Qaddafi but not necessarily much else.

Blog Post of the Week. My CFR colleague Rob Danin writes from Cairo that in the wake of Hosni Mubarak’s departure from power Egyptians “have many, many, questions, and very few answers.”

Poll Question of the Week. How is the Tea Party faring with the broader American public? Not so well, it turns out. CNN.com reports in its latest survey that 47 percent of Americans have an unfavorable view of the Tea Party. That’s up from 36 percent a year ago. And it’s just one percentage point lower than the unfavorability ratings for both the Democratic and Republican Parties. Does this mean that the Tea Partiers went from media darlings to just another group of disliked politicians in only two years?

Chart of the Week. While the headlines are consumed by events in Libya and the broader Arab spring, a low-level battle is going on in Washington over passage of free-trade pacts with South Korea, Colombia, and Panama. Both parties favor the South Korea free trade agreement, but the bickering continues over the Colombia and Panama deals. As the chart below shows, Colombia and Panama aren’t hot issues because neither is a major trade partner of the United States or poses much of a threat to U.S. jobs. The dispute has more to do with concerns within the Democratic Party over labor standards in both countries and Colombia’s human rights record. 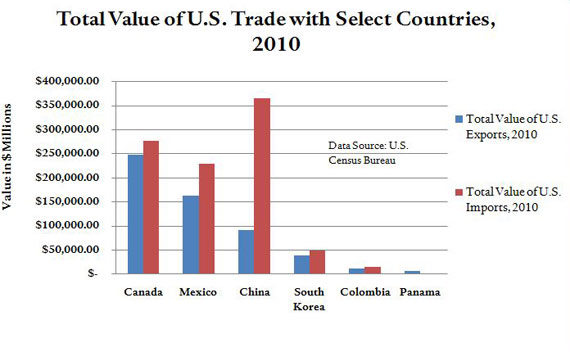 Too Good Not to Note. Ross Douthat discusses Obama’s “credibility gap” between words and deeds on Libya. David Rothkopf discusses the challenges Obama faces from within the U.S. military. The BBC profiles Alassane Ouattara, who won a contested presidential election in Cote d’Ivoire but whose opponent refuses to leave office, ushering in a round of political violence. "The Fix" reviews newly released poll results showing that Secretary of State Hillary Clinton enjoys higher approval ratings than those of President Barack Obama, Vice President Joe Biden, and Secretary of Defense Robert Gates, making her another in a long line of popular secretaries of state. Nate Silver posts the first of an envisioned three-part series that will tell you everything you wanted to know (and then some) about what polling early in a presidential campaign reveals about how the election will turn out.

Perils of Prediction. “Radio has no future.” William Thomson, better known as Lord Kelvin, one of the nineteenth century’s leading physicists.

Quote to Ponder. "As long as there are sovereign nations possessing great power, war is inevitable." Albert Einstein.

A Reason to Smile. Having a college deemed "most selective" tell you, “Welcome to the class of 2015!” Well done, Ian.