Above the Fold.  The tragic news that a U.S. Army sergeant slaughtered sixteen Afghans this week has scrambled the debate over the U.S. presence in Afghanistan. Afghan president Hamid Karzai has demanded that the United States agree to pull back its troops to bases in Afghanistan by next year. Rick Santorum and Newt Gingrich have discovered doubts about the wisdom of staying the course in Afghanistan.The public’s dissatisfaction with the war has hardened. A Gallup poll out this week found that 50 percent of Americans want Washington to speed up its withdrawal from Afghanistan; only 21 percent say stay the course.

The White House says it intends to stick by its plan to withdraw the bulk of U.S. troops by 2014. Gen. John Allen, who commands U.S. and NATO forces in Afghanistan opposes “any form of accelerated drawdown,” so much so that he apparently wants to slow down the pace of President Obama’s proposed withdrawal once the so-called surge troops depart the country next fall. You can still find plenty of independent military experts who think that General Allen has it exactly right. Their impassioned defense of current policy in the face of tragic news touches that chord in all of us that resonates with Winston Churchill’s immortal words from 1941: “Never give in. Never give in. Never, never, never, never--in nothing, great or small, large or petty—never give in.”

But Churchill ended that stirring call with a pretty big qualifier: “except to convictions of honor and good sense.” On that score, there are good reasons to doubt the wisdom of soldiering on in Afghanistan. One is that America’s track record in imposing peace and order is far from perfect. Yes, Washington succeeded in Germany and Japan (after wars that left both countries in ruins). But the list of countries where American occupations failed to produce the political stability that Washington was certain it could achieve is longer: Haiti, Nicaragua, Dominican Republic, Vietnam, and Somalia.

The more important issue, though, is the one that Richard Haass raised two years ago: even if the objectives of the stay-the-course camp could be achieved, they aren’t worth it in terms of blood and treasure. Al Qaeda long ago ceased to be a factor in Afghanistan, and as U.S. counter-terrorist operations in places like Yemen, Somalia, and the Sahara implicitly attest, Al Qaeda has plenty of “ungoverned spaces” from which to operate regardless of how things go in the Hindu Kush. Talk of the dire geopolitical consequences of a U.S. withdrawal from Afghanistan is similarly overblown. The United States benefited from exiting Vietnam despite the ugliness of its departure. The same would be true in Afghanistan. So here’s to hoping that as the White House publicly channels Churchill’s admonition to “never give in,” that it is privately heeding his advice “to exercise good sense” and speed up the U.S. exit from Afghanistan.

CFR Event of the Week. Foreign policy problems are becoming more complex and transnational at the same time that power and influence are shifting from the West to the rest. The standard policy recommendation that flows from these twin observations is that we need more and better global cooperation. But how do you make multilateralism work at international institutions that were designed in an entirely different geopolitical era? Bob Zoellick, the out-going president of the World Bank, took a crack at answering that question this week in a conversation at the inaugural meeting of CFR’s Council of Councils conference. Zoellick, who has an article in the most recent issue of Foreign Affairs on “Why We Still Need the World Bank,” argues that international institutions “are the heart of problem solving” but they “have to adapt.” That, of course, is easier said than done. You can hear more from Zoellick, including his thoughts on how institutional “legitimacy also has to be driven by effectiveness,” by watching the video here or below, listening to the audio, or reading the transcript.

Read of the Week. Generations of political science students were taught Richard Neustadt’s dictum: “The power of the presidency is the power to persuade.” There is just one problem: the claim doesn’t appear to be true. As Ezra Klein recounts in the New Yorker, political scientists have churned out tons of studies showing that presidential speeches seldom rally public opinion to the White House’s side. To the contrary, a high-profile speech often has the perverse result of making the president’s job harder. Why? Because the speech gives opponents something to attack, even if they hadn’t given a fig about the issue in question before he spoke.

Blog Post of the Week. Micah Zenko marvels at how much “wonk writing”—which I suppose is one way of describing what I do for a living—has changed over the last two decades. Long gone are days of writing an op-ed, shipping it off to an editor by snail mail, and patiently waiting for a response. Now thanks to the Internet, blogs, and tweets, it may take only minutes to go from conceiving an idea to having it read around the world. Which raises three questions: Is too much stuff being produced? Is it any good? And so what?

Poll Question of the Week. With Afghanistan dominating the headlines in recent days and Bashar al-Assad’s forces having crushed the government’s opponents in Homs, Syria has been getting less play in U.S. news coverage. That probably isn’t troubling most Americans. A Pew Research Center poll out this week found little support in the United States for intervening in the fighting. When asked “does the U.S. have a responsibility to do something about the fighting in Syria,” six out of ten Americans say “no.” What’s remarkable about the poll result is that the “stay-out” sentiment is bipartisan. Majorities of both Democrats and Republicans oppose military intervention in Syria.

Chart of the Week. Gallup reported this week that only a slim majority of Americans (54 percent) say the United States is the No. 1 military power in the world. That’s down from 64 percent in 2010. The difference between Democrats (51 percent) and Republicans (57 percent) is slight, as is the difference between self-described conservatives (57 percent) and liberals (52 percent). The biggest difference is between men (65 percent) and women (44 percent). That twenty-one percentage point difference is even bigger than the sixteen percentage point difference separating people with post-graduate educations (67 percent) and those with only a high-school education or less (51 percent). These numbers indicate that many Americans do not comprehend the advantages that the U.S. military hasover every one of its peer competitors, or how much the United States spends on its military compared to everyone else. As the chart below shows, it’s not even close. The United States alone accounts for nearly half the world’s military spending. Now the U.S. military services certainly waste some money. But they don’t waste that much money. 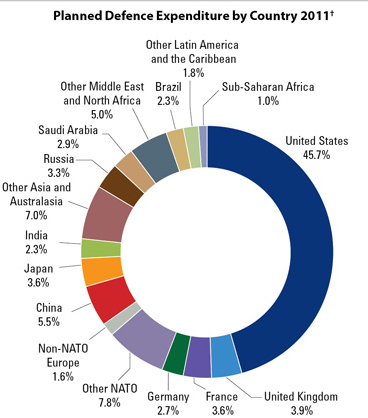 Too Good Not to Note. Elliott Abrams notes that Saudi Arabia does not permit the free exercise of religion—even though more than a million of its residents practice a religion other than Islam—so he is not surprised that the Grand Mufti of Saudi Arabia recently declared that it is “necessary to destroy all the churches of the region.” Robert Danin remembers the horror that Saddam Hussein’s forces inflicted on Halabja twenty-four years ago today. Ed Husain thinks that Americans are not asking the right questions about Iran. Jeff Mankoff assesses what Vladimir Putin’s return to the Russian presidency means for the United States. John Cassidy wonders whether Rick Santorum’s victories this week in Alabama and Mississippi mean that Republicans are headed toward a brokered convention in Tampa this summer.

Perils of Prediction. "To believe that Apple can somehow succeed where all others have failed is to ignore some fundamental realities of tablet computing." Randall C. Kennedy, IT consultant and former InfoWorld contributor, on the iPad, 2009. Sometimes it pays to ignore “fundamental realities.” Apple’s market capitalization now stands at about $560 billion. That’s more than Exxon Mobil ($400 billion), IBM ($240 billion), and Wal-Mart ($210 billion). And a big reason for that is the iPad’s phenomenal success. Heck, the iPad is so big that even Parisians like it!

Quote to Ponder. “No passion in the world is equal to the passion to alter someone else’s draft.” H.G. Wells.

A Reason to Smile. March Madness.

The World Next Week: Iran and Afghanistan Debates Plus Greek Debt