Skip to main content
Friday File: A Treaty for a Tax Cut 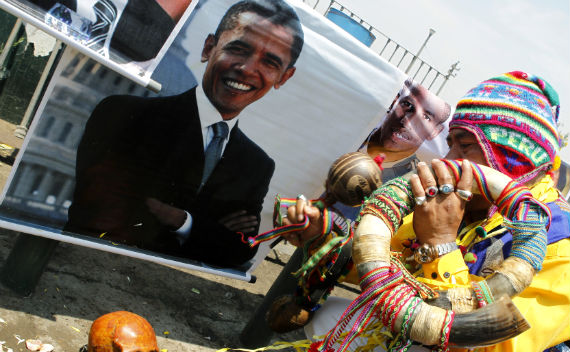 Above the Fold. Don’t count the New START Treaty out just yet. Sen. John McCain (R-Ariz.) told Good Morning America on Tuesday that the treaty could be approved by year’s end. Sen. George Voinovich (R-Ohio) changed his mind about the danger New START posed to Eastern Europe and all but endorsed the accord in a conversation with the Wall Street Journal. Senate Minority Leader Mitch McConnell (R-Ky.) is open to a treaty for tax cuts trade--the White House gets a New START vote once the Bush tax cuts are extended across the board. Such a deal would certainly change the GOP’s political calculations even as it angers congressional Democrats who want to take a stand against tax cuts for millionaires. So the question at hand no longer looks to be whether we are better off with New START. Instead, it is how much we should be willing to add to the national debt to put it in place. We’ll find out the administration’s answer in the next few weeks.

CFR Event of the Week. J.W. Marriott Jr., chairman and chief executive officer of Marriott International, spoke at CFR’s CEO Speaker Series. In a wide ranging conversation, he shared his thoughts on how to revitalize the U.S. economy and global leadership, the prospects for growth in China, India, and Brazil; and the need for immigration reform. Read the transcript, listen to the audio, or watch the video.

Backgrounder of the Week. CFR.org’s Deputy Editor Deborah Jerome sat down with several of my colleagues to talk about how the WikiLeaks fiasco is affecting relations with the countries they follow.

Read of the Week. Bill Gates and science writer Matt Ridley, the author of The Rational Optimist, squared off in the pages of the Wall Street Journal on the role aid can play in promoting growth in Africa and on the urgency of combating climate change. Their differences, which are more of degree than of kind, raise most of the big issues in both debates.

Blog Post of the Week. In a post on Shadow Government, former Defense Comptroller Dov Zakheim talks about the need to rein in spiraling health costs for active duty and retired military personnel. The amount the Defense Department now spends on health care each year--roughly $50 billion--exceeds what most of our allies spend on their entire military budgets. Reading Dov’s piece alongside the articles that the New York Times and the Wall Street Journal have run on the topic provides a great primer on the problem, as well as an inkling of why trying to restore fiscal balance in Washington will be so politically painful.

Poll Question of the Week. When Washington wasn’t talking about WikiLeaks this week it was talking about deficit reduction. It’s not clear, however, that the American public is listening. A recent CBS News poll asked, "Of all the problems facing this country today, which one do you most want the new Congress to concentrate on first when it begins in January?" Only 4 percent named either the budget deficit or the national debt. By contrast, 56 percent named the economy, and 14 percent named health care. (Only 2 percent named Iraq and Afghanistan.) A tip to all deficit hawks: Stop talking for the moment about cutting mortgage tax breaks and begin talking about why deficit reduction matters. Americans won’t accept deficit medicine until they believe it will cure problems that matter to them.

Chart of the Week. Diplomats are gathered this week and next in Cancun for the U.N. Climate Summit.  There were some promising developments in week one. We’ll see whether week two produces any major breakthroughs.  Even if it does, the chart below makes it hard to see Congress acting any time soon. 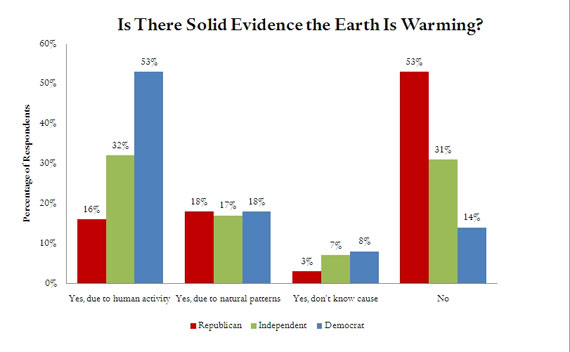 Too Good Not to Note. Speaker-of-the-House-in-waiting John Boehner and Senate Minority Leader Mitch McConnell sent the White House an open letter that leaves out the word “compromise.” Elisabeth Bumiller relays Defense Secretary Robert Gates’s sensible and sober assessment of the impact of the WikiLeaks disclosures. Dana Milbank sees literary genius in the State Department’s leaked cables. Daniel Henninger details why there is no fix for WikiLeaks. If you want to stay on top of the latest nuggets uncovered by WikiLeaks, then WikiLeaked is for you.

Perils of Prediction. “I tell you Wellington is a bad general, the English are bad soldiers; we will settle the matter by lunch time.”  Napoleon Bonaparte on the morning of the Battle of Waterloo, June 18, 1815.

A Reason to Smile. Walking on Sunshine by Katrina and the Waves.