Above the Fold. The rhetoric on Iran certainly heated up this week. Secretary of Defense Leon Panetta noted ominously on Sunday “if we have to do it, we will do it” when asked what the United States would do if the Iranians crossed America’s red line with their nuclear program. Director of National Intelligence James Clapper told the Senate Intelligence Committee on Tuesday that Iranian leaders  “have changed their calculus and are now more willing to conduct an attack in the United States in response to real or perceived U.S. actions that threaten the regime.” And Israeli Defense Minister told participants in the annual Herzliya Conference yesterday that the time for stopping Iran’s nuclear program was fast running out, adding “whoever says ‘later’ may found that later is too late.” So is the clock about to run out on sanctions?  Probably not. Keep in mind the old saying that if you want peace, prepare for war. Both the United States and Israel have ample reason to talk tough right now--it increases the pressure on Iran’s critics to make the sanctions stick, thereby increasing the pressure on Tehran to negotiate. Meanwhile, Iran has paired its tough talk over the Strait of Hormuz with a willingness to allow IAEA inspectors to return later in the month for a second round of talks. This could signal that a negotiated deal might be possible, though, the wiser bet would be that Tehran is playing for time by dangling the prospect of a deal before the world’s eyes. Odds are that this dance of threats and diplomacy will continue for a few months longer at least. Washington and Jerusalem know that the costs of waiting too long could be high, but so too could be the costs of acting too soon.

CFR Event of the Week. As tensions with Iran have risen over the past few weeks, our roiling partnership with Pakistan has faded into the background. That does not mean, however, that the troubled U.S.-Pakistani relationship has improved.  Indeed, as the New America Foundation’s Steve Coll, ERG Partners’ Robert L. Grenier, and CFR’s Daniel Markey noted at a CFR panel moderated by Tom Gjelten of NPR, the situation in some respects is worse, which has implications for Afghanistan, India, and international security as a whole. You can read the transcript, download the audio, or watch the video here or below.

Read of the Week. Secretary of Defense Leon Panetta made news this week by saying that U.S. troops in Afghanistan would step back from a combat role as early as mid-2013 rather than at the end of 2014 as had been widely presumed. Presumptive Republican presidential nominee Mitt Romney spoke for many critics of the administration’s Afghan policy when he called Panetta’s comments “misguided” and “naïve.” As the debate over Afghanistan policy rages inside the beltway, American soldiers and Marines continue to fight in places like Juz Ghoray and Musa Qala, as Luke Mogelson writes movingly in this week’s edition of the New York Times Sunday Magazine.

Blog Post of the Week. The Obama administration has pursued a not-so-secret policy of using drones to strike suspected al-Qaeda and Taliban targets in Pakistan. Because the drone program is covert, the White House has not had to defend or explain the success of what it says has been a high-value, low-cost operation. But as my colleague Micah Zenko argues, there are numerous unanswered questions about the drone program that the White House should be answering.

Chart of the Week. The United States is now moving into the time of year when colleges begin sending out their admissions offers. So what subject should you major in? (Or in the case of most people reading this post, what should you have majored in?) No great surprises here. Engineering majors get paid the best coming out of college, and they can expect to earn the highest median mid-career salaries. (Of course, being an engineer requires taking engineering courses. Three cheers for differential equations, anyone?) Conversely, elementary school teachers can expect to be at the bottom of the salary list in both the near term and the long term. 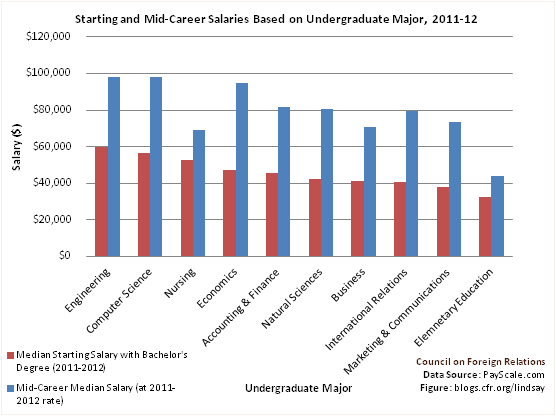 Too Good Not to Note. Michael Levi dives into the thorny question of who has the authority and expertise to say what on climate change. Ella Lipin remembers the Hama massacre thirty years after. Joshua Kurlantzick asks what is behind Myanmar’s reform movement. Sheila Smith explores Japan’s Iran sanctions dilemma. Michael Shifter looks at what foreign policy issues the GOP candidates didn’t talk about in Florida. Brian Wheeler discusses how "Europe" has become a negative term in U.S. politics. Mohamed El-Erian outlines the four tipping points that could crash our global economy and the four things that could save it. Nate Silver assesses five different paths the GOP nomination process could take going forward after Florida. Jennifer Rubin notes that a recent Pew poll reveals eroding support for Obama among Jewish voters. Fred Kaplan asks whether President Obama has just declared victory in Afghanistan. Steve Coll doesn’t think that an attack on Iran is imminent.

Perils of Prediction. Donald Trump will endorse Newt Gingrich for president. “As reported by the Associated Press, the New York Times, the Wall Street Journal, Politico, The Washington Post (in an AP story), and CNN (citing local “affiliates”), as well as local media outlets in Nevada.” Not exactly. “The Donald” yesterday endorsed Mitt Romney, saying that the former Massachusetts governor is “the one person that really speaks strongly about China because China is ripping the country and he’s the one person that continually mentions China and OPEC.”

A Reason to Smile. The Puppy Bowl.

The World Next Week: The United Nations Debates Syria