Above the Fold. We are now officially on the Uncle Sam shutdown showdown watch. Unless the White House and Congress agree by next Friday, March 4, on a continuing resolution (or CR as it is known in the trade) to fund the federal government, all “non-essential” government programs will halt. That means that U.S. troops will keep fighting in Afghanistan, the Border Patrol will keep manning the borders, air traffic controllers will keep scanning the skies, and veterinarians will keep tending to animals in U.S. research laboratories. But if you are planning to visit the Washington Monument, hike Yellowstone, renew your passport, or take out a home mortgage loan you will be out of luck. So will we avoid a shutdown? Probably, at least for a time. Democrats and Republicans alike say they want to avoid a shutdown, and both sides have public relations reasons to agree to a temporary, stop-gap CR that buys a couple extra weeks of negotiating time. One thing to watch for is division within Democratic ranks. Many Democrats on Capitol Hill think that a government shutdown will hurt Republicans because that is how the 1995 government shutdown played out. The White House worries that this time will be different and that President Obama will get blamed for failing to forge a compromise.

CFR Event of the Week. Americans seldom think much about Canada, unless they are hockey fans or planning a vacation to the glorious Canadian Rockies. But we are blessed to have Canada as our neighbor. The 5,525-mile-long U.S.-Canadian border is the longest undefended border in the world. And Canada buys more of our exports than anyone else—as anyone who sits in line waiting to cross the Ambassador Bridge from Detroit to Windsor, Ontario knows from experience. So CFR was fortunate this week to host Lawrence Cannon, Canada’s Minister of Foreign Affairs. Cannon emphasized the importance of the U.S.-Canada relationship, argued against protectionist measures, and advocated joint action to encourage job creation. You can read the transcript, watch the video, or download the audio to go.

Read of the Week. The inimitable Walter Russell Mead asks what the rise of the Tea Party means for American foreign policy. His answer in a nutshell: Much depends on which wing of the Tea Party prevails—the Palin-ite wing that champions the war on terror or the Paul-ite wing that comes close to embracing traditional isolationism.

Blog Post of the Week. The New Yorker’s Andrew Solomon, who profiled Col. Qaddafi in the magazine back in 2006, looks at the reasons why his regime is on the brink. A big part of the reason is that oil-rich Libya is one of the wealthiest countries in Africa but most Libyans live in dire poverty.

Poll Question of the Week. Should the United States "take the leading role in world affairs, take a major role but not the leading role, take a minor role, or take no role at all in world affairs?" Gallup asked this question earlier this month and found that a majority of Americans remain internationalists. Two-thirds say the United States should take a leading or major role in world affairs, while one-third say a minor role or no role at all. These numbers correspond with  other recent polls. The trend, however, is in the direction of “mind-your-own-business.” The percentage saying leading/major role fell thirteen points from the peak set back in 2003, while the percentage saying minor/no role rose an equal amount. One thing to watch for as we head into presidential campaign season is whether any Republican candidate seeks to tap into the “butt-out” sentiment.

Chart of the Week. Two years ago Andrew Natsios and Kelley Doley warned that rising grain prices would bring about a wave of food coups. That’s one prediction that unfortunately turned out to be right. Many observers point to rising food prices as one of the drivers of recent unrest in the Middle East. World Bank president Robert Zoellick warned last week that soaring food prices could threaten further political instability. The Food and Agriculture Organization reports that its Food Price Index has reached an all-time high. Of four common grains, only rice prices have fallen. 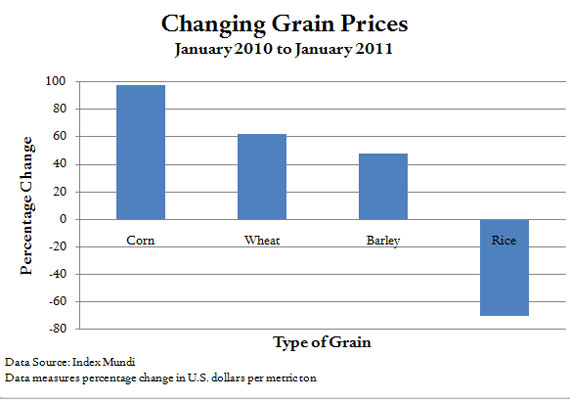 (Technical note: Yes, botanically speaking corn is a grain and not a vegetable.)

Too Good Not to Note. The New Yorker’s Steve Coll looks at the Obama administration’s effort to open talks with senior members of the Taliban. Dafna Linzer asks why so many of the answers on the U.S. citizenship test are wrong. Jon Stewart discusses the Iraq War with former Secretary of Defense Don Rumsfeld in a three part interview—part 1, part 2, and part 3.

Perils of Prediction. “Whether you like it or not, history is on our side. We will bury you!" Nikita Khruschev’s boast in November 1956 that the Soviet Union and its Eastern Bloc allies would prevail in their struggle with the capitalist West.

A Reason to Smile. Crocuses in bloom.

The Iowa Caucuses Are Exactly One Year Away