Above the Fold. The New York Times, the Washington Post, and the Wall Street Journal all took a break this week from reporting on Operation Odyssey Dawn and the federal budget battles to play Washington’s favorite parlor game: who’s leaving the administration and who’s coming in? Secretary of Defense Robert Gates has said he intends to step down this year, though he has yet to say exactly when. I don’t know who his successor will be—the media are touting current CIA director and former Clinton White House chief of staff Leon Panetta. But I do have a lot of sympathy for whomever he or she might be. Gates deserves all the praise he has received as secretary of defense. He is darn good at his job, so much so that he has to be in any discussion of the best defense secretaries ever. That means that whoever comes next will be hard pressed to follow a piece of advice on how to succeed in life–pick your predecessors wisely. It’s hard to be better than the best.

CFR Event of the Week. Sergey Ivanov, Russia’s Deputy Prime Minister, sat down with Thomas Graham, former National Security Council staffer and current senior director at Kissinger Associates, to discuss developments in U.S.-Russian relations. Ivanov emphasized the values that the United States and Russia share and hailed recent successes in the bilateral relationship like the agreement on transit into Afghanistan. He also expressed optimism about securing Russian accession to the WTO and pressed Washington to repeal the Jackson-Vanik amendment. You can read the transcript, watch the video, or download the audio to go.

Read of the Week.  Gayle Lemmon’s The Dressmaker of Khair Khana: Five Sisters, One Remarkable Family, and the Woman Who Risked Everything to Keep Them Safe is a wonderful read. I’m not the only one who thinks that. Dressmaker is #12 on the New York Times Bestseller List for Hardcover Nonfiction this week, #8 in E-book Nonfiction, and #10 on Combined Print & E-Book Nonfiction. Oprah.com has selected it as one of “18 books to watch for in April 2011,” and Parade Magazine made it one of its "Parade’s Picks."

Blog Post of the Week. Is it time to clip America’s global wings? My colleague Elliott Abrams just posted about his participation in a debate this week on just that question. Anyone who knows Elliott will not be surprised to discover that he argued the negative. It is a debate well worth watching in full; it was a great exchange that covered a lot of important questions and issues. And, yes, Elliott’s side won.

Poll Question of the Week. So was Speaker of the House John Boehner right to warn the House Republican Conference this week that a government shutdown would help Democrats? Maybe, maybe not. The results of the most recent NBC News/Wall Street Journal poll found that 37 percent of Americans say they would blame congressional Republicans, 20 percent would blame congressional Democrats, and 20 percent would blame President Obama. Boehner is focused on the 37 percent figure attached to the Republican label. GOP hardliners point out that when you add up the numbers for congressional Democrats and the Democratic president, 40 percent of the public say they would blame the Democrats. This is one reason why Boehner is having a hard time keeping his fellow Republicans in line.

Chart of the Week. Entitlement programs are back in the news this week now that House Budget Committee Chairman Paul Ryan (R-Wisc.) has unveiled his plan to put the federal government back on the road to fiscal solvency. (It’s a pretty slow road. Even if you accept Chairman Ryan’s heroic assumptions about how much spending will be cut and how fast the economy will grow, his plan wouldn’t balance the budget before 2030—that’s right, not for another nineteen years at the earliest.) If the entitlement debate in Washington ever moves beyond Democrats calling Republicans “heartless” and Republicans calling Democrats “irresponsible,” one of the things to know is that when it comes to deciding when you can retire with full benefits the United States has already made some tough decisions—at least when compared to other wealthy industrial nations. The United States ties with Japan for having the oldest age to receive full retirement benefits, and Americans have one of the shortest post-retirement periods among OECD nations. Conversely when you see how young Greeks can retire, you get an inkling as to why the Greek government is hemorrhaging red ink. 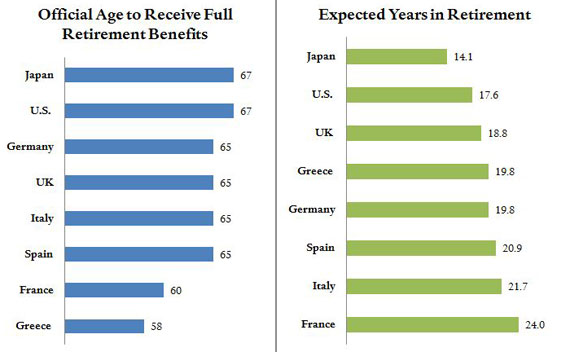 Data Source: OECD. Estimates and figures as of 2007.

Too Good Not to Note. Meaghan O’Sullivan weighs in on the gap between President Obama’s goals in Libya and his means. Josh Kurlantzick reviews China’s confused Middle East policies. Adam Segal takes a look at China’s latest white paper on its military modernization efforts. David Rothkopf writes that Beijing’s treatment of avant-garde artist Ai Weiwei shows why China is not a great power. Dan Drezner wonders whether a government shutdown would matter for American foreign policy. Nate Silver reminds us that while inside-the-Beltway folks are consumed with every move in the federal budget battle, most Americans aren’t. Chris Cillizza and Aaron Blake say that the polling data show that the Sarah Palin phenomenon has peaked.

Perils of Prediction. “Alas, with the Aleutian Islands, is an inhospitable, wretched, God-forsaken region, worth nothing, but a positive injury and incumbrance as a colony of the United States . . . .Of what possible commercial importance can this territory be to us?” Rep. Orange Ferris (R-N.Y.) during a House floor debate over whether to appropriate funds to buy Alaska, July 1, 1868.

Quote to Ponder. “The man who views the world at fifty the same as he did at twenty has wasted thirty years of his life.” Muhammad Ali, 1975.

A Reason to Smile. A baby-faced, five-foot, seven-inch walk-on goalie who goes from riding the bench to leading his team to a showdown Saturday night against the University of Minnesota Duluth Bulldogs for the championship in NCAA Division 1 Men’s Hockey.

The World Next Week: The Budget Battle Showdown

Lessons From History Series: Screening and Discussion of "Revealed: The Hunt for Bin Laden"