Above the Fold. Actions, even virtuous ones, have consequences. Sometimes those consequences are both unintended and undesirable. The CIA-engineered overthrow of the democratically elected Iranian Prime Minister Mohammad Mossadegh was cheered in 1953; it looked like a strategic error when Ayatollah Khomeini took power in 1979. Ditto the U.S. support for the mujahideen fighting the Soviet Red Army in Afghanistan. They morphed into the Taliban. Could the Abbottabad raid follow the same trajectory from elation to misery? Many Pakistanis have long worried that the United States seeks to steal their country’s nuclear weapons. SEAL Team 6’s daring raid on Osama bin Laden’s compound has moved that fear out of the realm of paranoid fantasy. Washington demonstrated both the capacity and the nerve to strike deep inside Pakistani territory. That has prompted speculation that the Pakistani military will seek to foil any U.S. attack on its nuclear stockpile by dispersing it to a wider range of hiding places. But dispersal increases the risk of theft, diversion, or unauthorized use. And Pakistan’s nuclear program is substantial; it could soon have more nuclear weapons than Britain. How likely is it that Pakistan will change its nuclear command and control procedures in the wake of Abbottabad? It’s hard to say. The Pakistani military keeps its nuclear program under tight wraps, and whatever the U.S. intelligence community knows it is keeping to itself. But at a minimum, be prepared for revisionist histories to emerge in the coming months that argue that Obama should have bombed bin Laden’s Abbottabad compound because that would have done less to spook Pakistani military leaders.

CFR Event of the Week. The raid that killed Osama bin Laden reflected years of work by the U.S. intelligence community. Rep. Mike Rogers (R-MI), chair of the House Permanent Select Committee on Intelligence, came to CFR this week to discuss the lessons intelligence professionals will draw from the long search for the world’s foremost terrorist. You can download the audio or watch the full video. In the clip below, Rogers discusses the often controversial interrogation methods that have been used on suspected terrorists in the years since 9/11.

Read of the Week. Secretary of State Hillary Clinton gave an interview to the Atlantic’s Jeffrey Goldberg for a cover story on America’s response to the Arab Spring. The conversation touched on China’s reaction to the Jasmine Revolution. Clinton was blunt. She called China’s human rights record “deplorable,” doubted that its one-party system could survive, and said Chinese leaders were on a “fool’s errand” in trying to hold off political change. Tough talk, and spot on at that. But what makes the interview remarkable is that it appeared just as Clinton and her administration colleagues sat down with Chinese officials for the third China-U.S. Strategic and Economic Dialogue. For their part, the Chinese seemed to think that turnabout was fair play. Chinese Vice-Premier Wang Qishan used his appearance on Charlie Rose to say that Americans are a “very simple people.” Perhaps we should just chalk it up, as my colleague Liz Economy does, to “refreshing candor.”

Blog Post of the Week. Ezra Klein argues that it isn’t policy differences that distinguish Republicans from Democrats on many issues but politics. Many leading Republicans, including some quite conservative ones, endorsed ideas such as individual health-care mandates and cap-and-trade systems to limit the greenhouse-gas emissions up until the moment Barack Obama became president. Then these ideas became a threat to our cherished freedoms. In all, it’s a sad commentary on the state of American politics.

Poll Question of the Week. I noted last week in an aside that rally-’round-the-flag dynamics don’t just influence how people see the president. When major events happen the public tends to become more supportive of other government institutions and more optimistic about the country. So it’s not surprising that a Reuters/Ipsos poll released this week found that the percentage of Americans who think the country is headed off on “the wrong track” fell thirteen points over the last month, from 69 percent in April to 56 percent in May. Perhaps economic events had something to do with that decline, or maybe last week’s GOP presidential debate lifted the nation’s spirits. More likely, though, it reflects Osama bin Laden’s death. (And yes, even Congress got a post-Osama bump—seven percentage points according to Gallup.)

Chart of the Week. America invented the computer and the internet, right? So we should be enjoying the quickest, fastest, most-up-to-date download speeds in the world when we want the latest CFR video or the highlights of Michigan’s women’s softball team. What? We aren’t Number One? We actually rank 29th when compared to other advanced industrialized nations? Not good. 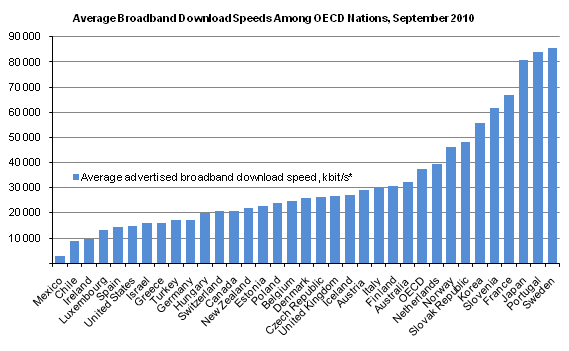 Too Good Not to Note. Walter Russell Mead analyzes the repercussions of the Abbottabad raid for Pakistan. David Bosco wonders if the raid complied with the UN Charter’s rules on the use of force. William Saletan argues that the raid was less of a gamble than the White House has suggested. Bobby Chesney notes that continued U.S. military operations in Libya in the absence of congressional authorization present President Obama with some interesting decisions to make about the rationale for his legal authority to order the U.S. military into action. Justin Mankin asks why the United States, after being in Afghanistan for a decade, has no strategy for fighting corruption in the country. Elliott Abrams puzzles over the Obama administration’s policy toward Syria. Clyde Prestowitz does not like the conventional wisdom in the United States on China.

Perils of Prediction. “No one knows more about this mountain [Mount St. Helens] than Harry. And it don’t dare blow up on him. This goddamned mountain won’t blow.” Harry Truman (no, not that Harry Truman), an 83-year-old owner of a lodge near Washington State’s Mount St. Helens, disputing predictions that the volcano was about to erupt. On May 18, 1980, just days after Mr. Truman made his prediction, Mount St. Helens erupted. He and fifty-six others died.

A Reason to Smile. The Red Sox and Yankees square off in the Bronx for a three-game series.