Above the Fold. The hot topic in Washington this weekend—assuming that the rumor of Kim Jong Un’s assassination is just that—is the upcoming Valentine’s Day meeting between President Obama and Xi Jinping, China’s vice president. Why all the buzz about a vice president? Because this one is expected to succeed Hu Jintao later this year as China’s leader.

So who exactly is Xi? (It’s pronounced “shee.”) He is fifty-eight years old and the son of Communist Party royalty, if one is permitted to use that phrase. His father, Xi Zhongxun, was one of the party’s early members, eventually becoming deputy prime minister before being denounced like many of his colleagues during the Cultural Revolution. His father’s fall from grace meant that Xi spent part of his childhood in exile in China’s harsh countryside, but he obviously recovered well.

Xi has been to America before. In 1985, he led a delegation that visited Muscatine, Iowa, to study how American farmers raise hogs. He has one other tie to America—his daughter studies at Harvard. (She uses a pseudonym). Xi’s ties to the West don’t stop there: his ex-wife lives in Britain and his sister lives in Canada. (This obviously is not the same China that Mao Zedong ran.) Oddly enough, Xi isn’t the most famous member of his family right now. That distinction belongs to his current (second) wife, Peng Liyuan, who is invariably billed in newspaper stories as “one of China’s top folk singers.” (Here she is singing “My Motherland.”)

China hands are now trying to guess where Xi will take China. Will he encourage more political openness? (His father apparently condemned what the Chinese government did at Tiananmen Square.) Will he be the face of a new, more assertive China? (He once said sometimes “thumping the table is better than not thumping.”) Will he prove incapable of managing a system in which power is increasingly diffused and the number of social protests growing? (China now averages 180,000 protests a year.) Thanks to Wikileaks, we know where some U.S. diplomats think Xi intends to take China. But the truth is no one knows for certain, not even Mr. Xi. Stay tuned.

CFR Event of the Week. Talk of a possible military showdown with Iran over its nuclear program continues to dominate the headlines. Joining CFR this week to consider the arc of U.S.-Iranian relations was Dr. Trita Parsi, who brings a unique perspective to the issue as founder of the National Iranian American Council. You can listen to the audio here.

Read of the Week. The teaser for James Fallows’s piece in the most recent edition of The Atlantic on President Obama is pretty good, so permit me to quote it in full: “As Barack Obama contends for a second term in office, two conflicting narratives of his presidency have emerged. Is he a skillful political player and policy visionary—a chess master who always sees several moves ahead of his opponents (and of the punditocracy)? Or is he politically clumsy and out of his depth—a pawn overwhelmed by events, at the mercy of a second-rate staff and of the Republicans? Here, a longtime analyst of the presidency takes the measure of our 44th president, with a view to history.” Warning: The F-word makes one appearance in the article.

Blog Post of the Week. The rising death toll in Syria, coupled with Chinese and Russian vetoes last weekend of a toothless UN Security Council resolution condemning the Assad regime, has fueled talk (at least on American cable news shows) of military intervention. Ed Husain, who thinks that intervening militarily in Syria will do immeasurably more harm than good, asks several critical questions about a possible American military action that supporters of a tough U.S. response should mull over. And Robert Danin argues that before turning to force, Western powers should try one more time to see if they can’t strike a deal with Moscow to force out Assad.

Poll Question of the Week. Professional economists have been knocking German Chancellor Angela Merkel for some time for not moving quickly and aggressively enough to help Greece with its debt problems and thereby limit the damage done by the eurozone crisis. If you want some insight into why Merkel doesn’t view the problem in the same way that economists do, consider the results of a recent poll done in Germany. Eight out of ten Germans oppose continuing with the existing Greek bailout package unless Greece implements the reforms it has agreed to, and 53 percent of Germans think it would be best if Greece leaves the eurozone and return to its former currency, the drachma. Sometimes politics trumps economics, no matter how compelling the arguments offered by the PhD’s may be.

Chart of the Week. Want to understand why Greece is in such a tough spot when it comes to fixing its debt dilemma? The chart below about sums it up. Greece’s debt load rose by a third over the past three years (partly because spending grew and partly because interest rates rose on the money it borrowed). Meanwhile, its economy shrunk by about 7 percent. Rising debt and falling income are always a toxic mix. What complicates things in Greece’s case is that it doesn’t have the option that most countries have in this situation: devaluing its currency in the hope that the result will be a more competitive economy that will produce more growth. When European leaders constructed the eurozone, they essentially built a house with no exits. There is no easy and clean way for Greece to exit the eurozone, even if a majority of Germans think it should. 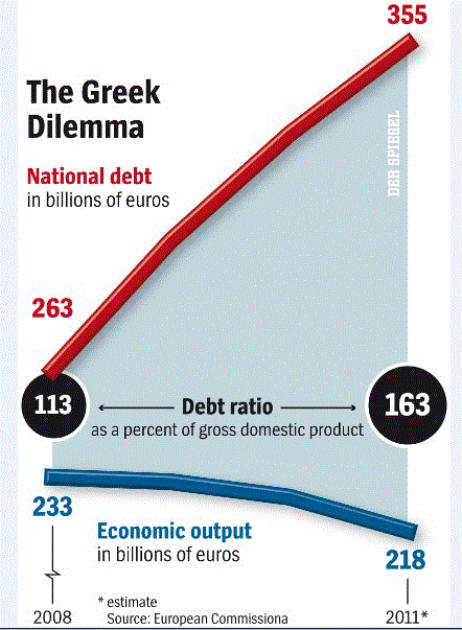 Too Good Not to Note. Michael Levi asks if experts are wrong in their predictions of abundant and cheap natural gas. Stewart Patrick looks at the warnings contained in the recent Global Sustainability Report. John Limbert, a former hostage in Iran, thinks that it’s time to take a different approach in talking with Tehran. Steve Tsang thinks China hurt itself in the Middle East by vetoing the UN Security Council resolution on Syria. Joshua Foust sees unintended consequences for Syria in last years’ Libya intervention. Jason Miks surveys Rick Santorum’s foreign policy views. Mike Brownfield thinks that the Middle East is crumbling around President Obama’s foreign policy. Conor Friedersdorf seeks to explain why Republicans have failed in their efforts to tarnish Obama’s foreign policy accomplishments. Dan Drezner asks if Obama lets crises fester. Ian Buruma believes that Obama’s recognition of America’s limitations is not a sign of cowardly pessimism, but of realistic wisdom. Charlie Kupchan thinks that American politicians should stop pretending that the United States runs the world. David Rothkopf wonders if we aren’t living in the best moment in U.S. history even if we are not enjoying it.

Perils of Prediction. Rick “Perry will win the Iowa caucuses easily because Michele Bachmann will be running out of money and will have scared the party leadership. In New Hampshire, he will at least finish close to [Mitt] Romney, and in South Carolina he will affirm his run by winning the delegates necessary to seal up the nomination. Perry will take South Carolina by a margin wider than his credibility gap.”  James Moore, CNN.com, August 31, 2011. The Rick Perry landslide never materialized. The Texas governor finished fifth in Iowa, sixth in New Hampshire, and quit the race before South Carolinians went to the polls. To make matters worse, his failed presidential bid looks to have damaged his standing with his fellow Texans. But his wife, Anita Perry, still hopes he will run again.

Quote to Ponder.  “It takes courage to grow up and turn out to be who you really are.” E.E. Cummings

A Reason to Smile. North Korean accordion players with an instrumental cover of the 1980s Top 40 Hit, “Take On Me”.