“Give me yield, give me leverage, give me return” perfectly sums up how Wall Street bought itself close to financial ruin. JP Morgan’s William Winters didn’t just create help to create CDOs. He seems to have a way with words.

During the past few years, the Street bet – and bet big – on two theories in its quest for higher returns.

The first was that housing prices never fell. At least not on a nation-wide basis. That meant that lending against a diversified pool of housing collateral wasn’t that risky, no matter how risky the individual borrower might be.

The second was that macroeconomic – and financial – volatility had been vanquished. That, in effect, meant it was OK to try to improve returns through the use of borrowed money.

As the crisis has unfolded, the different ways different institutions had bet on a low-volatility-home-prices-only-rise world gradually became clear. Gretchen Morgenson – in her big Sunday New York Times article-- delves into how Merrill Lynch in particular got caught up in the excesses of the boom.

Her article -- which included the Winters quote -- didn’t just look at Merrill though. She noted that Wall Street was a big buyer of mortgages for its "private label" mortgage backed securities at the peak of the housing boom. Morgenson reports that the Street issued $178 billion of mortgage and asset backed CDOS in 2005 – and an incredible $316 billion in 2006. 2006 was when the quest for yield was at its most intense. Short-term interest rates had been raised. That should have squeezed profits. The fact that it didn’t should have been a warning sign.

It turns out that the rapid growth in CDOs stuffed with exposure to risky mortgages -- including "synthetic" exposure from writing credit default swaps on bonds backed by subprime debt* -- was facilitated by the broker-dealers willingness to hold more credit risk on their own balance sheets. If you have any doubts, read Gillian Tett’s reporting from over a year ago. 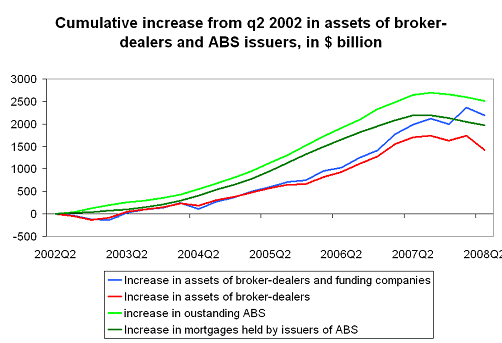 Correlation doesn’t imply causation, but in this case we have discovered that at least some of the broker dealers were holding a lot of asset-backed securities on their balance sheets -- so there was at least a bit of direct causation. 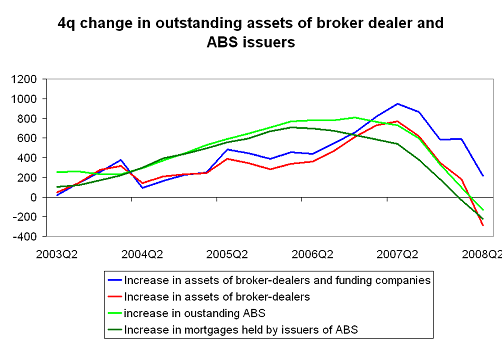 Why does this matter? Accrued Interest – in a recommended post -- explains:

However, we also had a financial economy which had become reliant on low volatility and continuous access to liquidity. After the failure of Bear Stearns, Wall Street was forced to decrease their leverage positions. ... This added to the already painful economic adjustment underway.

Agency demand increased in early 2007 -- and then increased even more after last August. 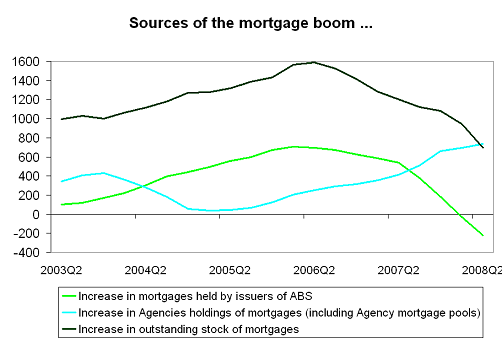 Absent a second source of demand for mortgages, the collapse of the private label securitization business would have led to an even bigger downturn than we have seen to date. However, it also left the US in a position where it was relying heavily on the Agencies to support the mortgage market. Over the last four quarters, the growth in the Agencies mortgage portfolio accounts for the full increase (through q2) in the outstanding stock of mortgages. That is why the willingness (or right now, the unwillingness) of central banks to buy Agency debt matters: it feeds directly into the cost of borrowing to buy a home. That in turn, feeds into home prices – and ultimately the losses the financial sector will take on the risky mortgages that were extended during the boom …

* Yves Smith is skeptical that Merrill was as interested in synthetic CDOs as Morgenson claims. I am not as skeptical – largely because Morgensen’s story matches up with earlier reporting by the Wall Street Journal (see their reporting on "Norma") and the Financial Times.

Synthetic CDOs were composed out of CDS rather than actual bonds. Selling insurance against default on a bond has many of the same characteristics as actually owning the bond. Both are bets that pay off if nothing goes bad. If you own the bond, you get paid back in full with interest. If you sell insurance you collect the insurance premium and never have to pay out. Clever financial engineers substituted one for the other, as for a while, there was more demand for subprime exposure than actual subprime loans from investors eager for big returns (helped along by investment banks willing to take the parts of the structure that investors didn’t want on their own balance sheets) …

The Wall Street Journal wasn’t sure whether the "protection" v default on subprime bonds that Merrill sold to Norma (the CDO) was kept on its balance sheet or sold to other investors. The Journal (Mollenkamp and Ng) wrote:

For Norma, N.I.R. assembled $1.5 billion in investments. Most were not actual securities, but derivatives linked to triple-B-rated mortgage securities. Called credit default swaps, these derivatives worked like insurance policies on subprime residential mortgage-backed securities or on the CDOs that held them. Norma, acting as the insurer, would receive a regular premium payment, which it would pass on to its investors. The buyer of protection, which was initially Merrill Lynch, would receive payouts from Norma if the insured securities were hurt by losses. It is unclear whether Merrill retained the insurance, or resold it to other investors who were hedging their subprime exposure or betting on a meltdown.

With the benefit of hindsight, it is pretty clear that Merrill resold the insurance it sold to its CDO machine to other investors -- and that it also bought a lot of the tranches of the CDOs like Norma. The overall result was that Merrill ended up holding a lot of subprime exposure ...