The good news in the latest World Bank China Quarterly:

One. China is growing, thanks to China’s government. The World Bank estimates that the government’s policy response will account for about 6 percentage points of China’s 7.2% forecast growth (p. 8). That’s good. There is a big difference between growing as 7% and growing at 1%. This was the right time for China’s government to "unchain" the state banks. Ok, it would have been better if China had allowed its currency to appreciate back in late 2003 and early 2004 to cool an overheated economy instead of imposing administrative curbs on bank credit and curbing domestic demand. Then China might not have ever developed such a huge current account surplus and avoided falling into a dollar trap. But better late than never: this was the right time to lift any policy restraints on domestic demand growth.

By some indicators, credit in China is even looser than in the U.S., where the Federal Reserve has extended unprecedented support to private markets. … China’s methods for pumping cash into the economy are quite different from those of other major economies. Its banks, almost all of which are state-owned, made more than three times as many new loans in the first quarter as a year earlier. Central banks in the U.S., Europe and Japan lack such control over lending, and have instead used extremely low interest rates and direct purchases of securities to support credit.

Two. China’s fiscal deficit will be closer to 5 percent of GDP rather than 3 percent of GDP. That’s cause for celebration in my book. Last fall I was worried that the desire to limit the fiscal deficit to three percent of GDP would mean that there was less to China’s stimulus than met the eye (or hit the presses). I was wrong. If the likely future losses on the rapid expansion of bank credit are combined with the direct fiscal stimulus, China almost certainly produced a bigger stimulus program than any other major economy.

Three. China’s current account surplus is now projected to fall in 2009. Exports still haven’t picked up -- and we now have data through the first five months of the year. Imports by contrast are starting to pick up. That shows up clearly in a chart of real imports and real exports, a chart that draws on data that that the World Bank’s Beijing office generously supplied me: 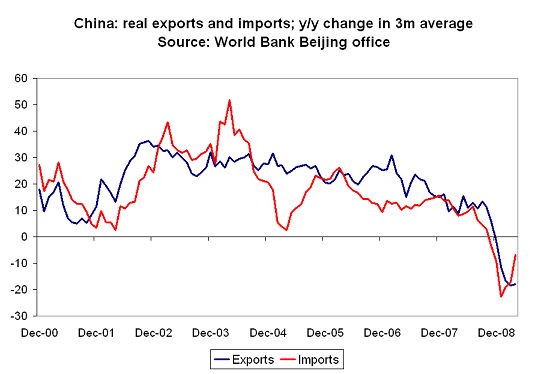 Some of that is commodity stockpiling and thus not a reflection of underlining demand. And some stockpiling sounds a lot like simple speculation. But let’s set those debates aside for a bit.

In dollar terms, China’s 2009 current account surplus will be a bit smaller than its 2008 surplus (The World Bank assumes that China’s trade surplus in the last half of 09 to be significantly smaller than its surplus in 08, as the surplus was up in the first five months of 09). And since the fall in commodity prices would be expected to push the surplus up, all other things being equal, that indicates a real shift in net exports. Net exports, according to Dr. Kuijs of the Bank’s Beijing office, will subtract about 2.5% from China’s overall GDP growth in 2009.

One. It isn’t clear that China has put in place policies that will bring about a sustained rise in domestic consumption. The stimulus has worked by pumping up investment, especially state investment. And investment already loomed large in the national accounts. Olivier Blanchard:

“In response to the crisis, China has embarked on a major fiscal expansion, with a focus on investment rather than on consumption. This was the right policy given the need to increase spending quickly, but this increase in investment can only last for a while. The question is whether, as time passes, China will allow an increase in consumption.”

If China’s exports fall faster than global demand, that opens up space that allows others to cut back less. The alternative -- fast Chinese export growth amid a shrinking global economy -- would be a sure source of trouble. But China still isn’t really acting as a locomotive for overall global demand growth.

Three: Real imports of manufactured goods are still down 16% y/y. The rebound in Chinese imports has been driven entirely by the rise in commodity imports; real imports of primary products were up 17% (y/y) in April. 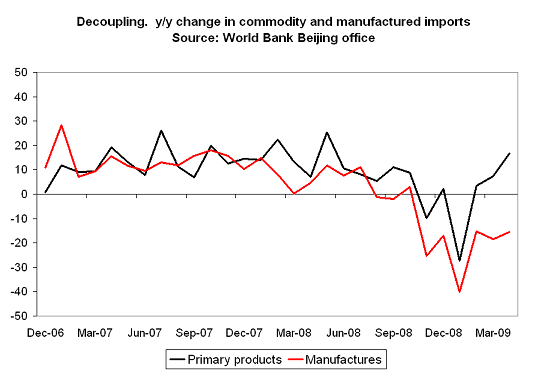 Back in 2003, when China was going through another lending boom, real imports of all kinds were up way more than they are now. Of course, back in 2003, China’s export sector was also booming and that pulled in imports for the "processsing trade." The comparison isn’t perfect. But it does highlight how different China’s current lending and investment boom is from past lending and investment booms.

And part of it is that there is plenty of spare capacity in China to meet a surge in Chinese demand. For say cars. Chinese auto sales may top US auto sales this year – and China seems able to meet that rise in demand without importing a lot of finished cars or auto parts.

And China’s government also seems particularly keen on making sure China’s stimulus is spent in China. Jamil Anderlini reports: “Beijing said government procurement must use only Chinese products or services unless they were not available within the country or could not be bought on reasonable commercial or legal terms.”

Kind of risky for a country that still exports way more than it imports.

But it shouldn’t be a total surprise. The usual argument for why China would keep its exchange rate undervalued even though the undervalued exchange rate meant that China was overpaying for foreign assets and thus would eventually take losses was that China needed to keep up Chinese employment, and this was a way to do so. And don’t forget, the undervalued renminbi has encouraged jobs through import substitution – not just the expansion of China’s export sector. China’s hasn’t been interested in undistorted trade; it has been interested in using trade to support domestic activity in China. It isn’t a huge jump then to see why China might want to make sure that its domestic stimulus creates, in the first instance, as many Chinese jobs as possible.

But it does suggest that China’s commitment to say the G-20 is limited. Just giving China a seat at the international negotiating table won’t necessarily change China’s policies.

All in all, I would say the good trumps the bad. But real problems will come if China’s buy China policy is still holding down Chinese demand for the world’s goods when global demand for Chinese goods returns; rising exports and still stagnant manufacturing imports from the world’s biggest surplus country wouldn’t be terribly popular globally.

I am pretty sure China didn’t sell Treasuries in April (or May, for that matter)