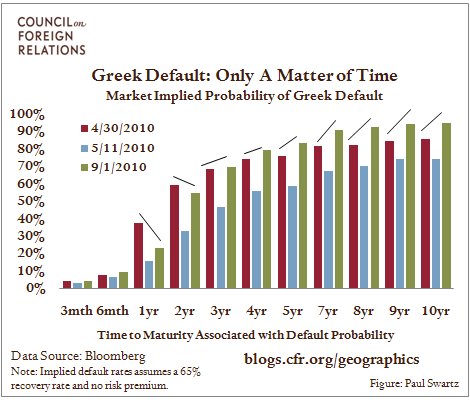 The difference between Greek and German government bond yields can be used to estimate the market’s view of the likelihood of a Greek default. The chart above shows these probabilities over different time frames on three different dates. On April 30th, no European plan was yet in place to address the ballooning Greek debt, and default was considered a real possibility in the short term. On May 11th, just after the European Stabilization Mechanism (ESM) was announced, markets sharply cut their view on the odds of default across all time horizons. However, the market’s analysis of the ESM has become much more nuanced since then. On September 1st, the market’s view of the probability of default within two years was lower than before the ESM was announced, but higher over longer time frames.

Greece will happily borrow from the ESM to avoid having to close its primary deficit (that is, excluding interest payments) too rapidly. Yet if Greece is successful in eliminating its primary deficit, its temptation to default will actually grow, as it can wipe out huge amounts of accumulated debt without any longer needing the financial markets to fund current expenditures. If faced with the choice between paying Greek debts and letting Greece default, its northern neighbors may, once their banks are on more solid footing, find it more attractive simply to let Greece default. This is the story line that the markets are now pricing into government bond spreads.

China Will Force the World Off Oil