Most analysis of China’s April trade data focused on the negative. Export demand wasn’t particularly strong. That cuts into estimates of China’s growth – and suggests ongoing weakness in the global economy (or an overly optimistic initial spin on China’s March trade data). Jamil Anderlini of the FT:

Chinese exports fell steeply in April for the sixth month in succession, suggesting the worst might not be over for the world’s third largest economy. The total value of Chinese exports fell 22.6 per cent to $91.9bn last month compared with the same month a year earlier – a faster rate of decline than the 17.1 per cent year-on-year drop in March.

But the growth in Chinese exports tells us more about the US and Europe than China. The data on China’s imports tell us a bit more about domestic conditions in China. And the April uptick in imports suggests that Chinese domestic demand has stabilized. 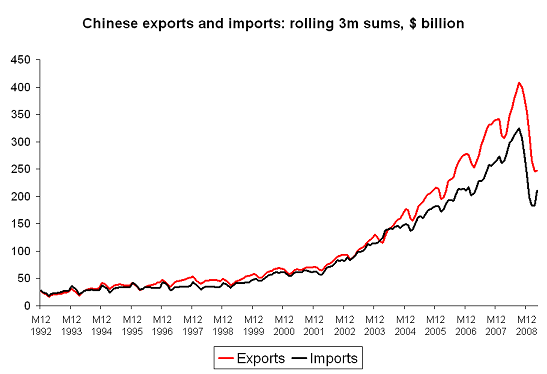 One of my favorite current charts looks at how much China is importing over the last 3 months compared to how much it imported in the same period a year ago. On that measure, the “free fall” in China’s imports is now over. 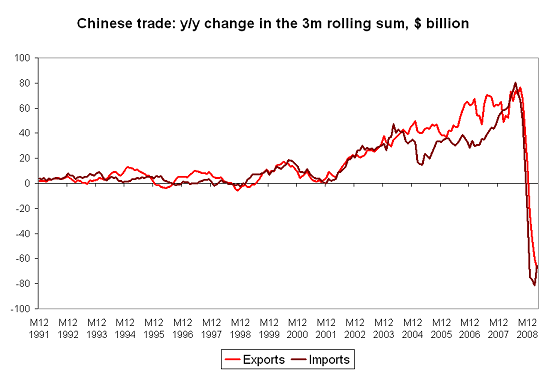 The CFR’s Paul Swartz has tried to strip out the impact of oil on the data. While the fall in China’s oil import bill is part of the story, it also isn’t the entire story. Excluding oil, China’s imports look to be picking up after a very sharp fall. 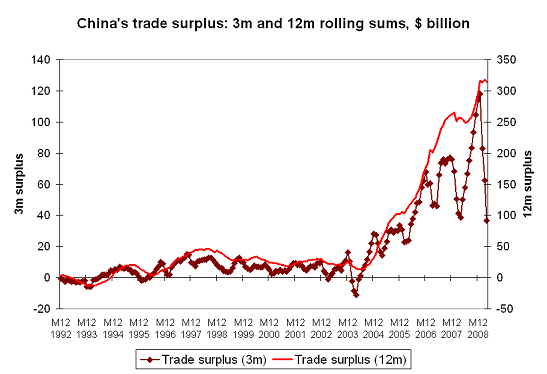 That is a change. In December and January, China’s surplus looked to be rising. Now there is a bit of evidence that demand has recovered in China a bit faster than in the rest of the world.

All this though is subject to two large caveats.

- Year over year imports are still way down, and down by more that I suspect can be explained just by the fall in demand for imported components for China’s exports. The import data is more consistent with China’s electricity data than its industrial production data.

-- Chinese demand for imported iron and aluminum and other minerals is way, way up (the FT: "China’s imports of unwrought copper rose to 400,000 tonnes in April, up 63 per cent compared with the same month last year. Total aluminium imports tripled from March to reach 440,000 tonnes in April."). At least in volume terms. Some of the rise reflects a policy decision to build up strategic stocks when global prices are low and demand is slack (More here). Fair enough. But such demand doesn’t reflect end demand. As such it doesn’t provide any real indication that domestic demand in China really has picked up.