In early January, data showing a sharp fall in Asian exports -- a couple of Asian countries, led by Korea, tend to report trade data faster than anyone else -- signaled a much broader slump in global trade.

Trade contracted exceptionally sharply almost everywhere. A sudden deceleration global demand growth -- probably augmented by an inventory correction and in some case a shortfall of trade finance -- is undoubtedly the main reason for the very sudden fall in global trade.

On the other hand, there is now some evidence that the contraction has ended, at least in Asia. Korea’s April exports, for example, topped its March exports. A chart showing Korea’s monthly exports and imports isn’t as scary now as it was a few months ago. 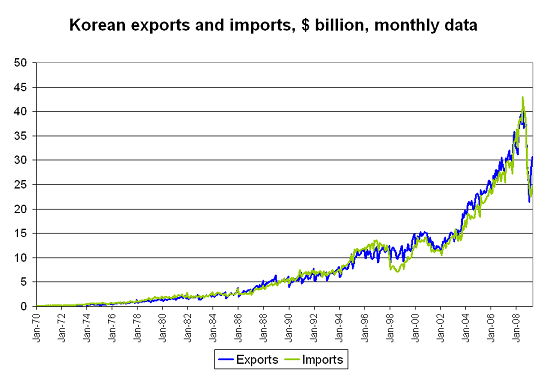 Korea’s April 2009 exports are about equal to its April 2007 exports. The y/y fall in Korea’s exports is now similar to the fall in 2001 -- when the tech bust hit Korea hard. That counts as good news these days, as for a while it looked like the current fall would be far larger. 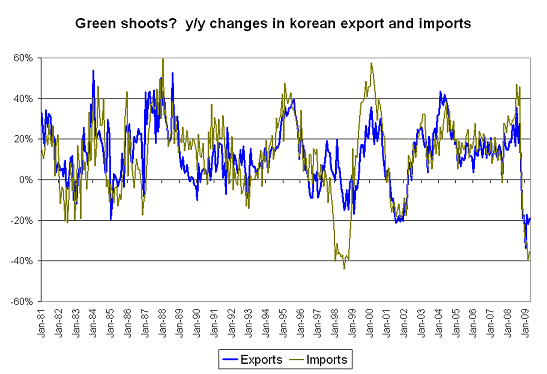 And if Chinese manufacturing is truly now poised to expand again on the back of China’s stimulus -- as China’s PMI data (perhaps) suggests -- Chinese imports should start to grow again, supporting global demand.

Three important caveats though are in order:

2) US demand for Korean autos (Hyundais in particular) have fallen by much less than the fall in total US demand for cars. See FT Alphaville’s useful chart. That is one big reason why Korean exports have held up better than Japanese -- and for that matter German -- exports. This no reflects at least in part the effect of the won’s weakness. It is a lot easier to offer to cover the payments of a person who loses their job if the won is at 1400 -- or 1200 -- than if the won is at 900.

The last point applies throughout Asia. Last week the Wall Street Journal ran a story highlighting how the benefits of China’s stimulus were trickling out to the world -- and to the US. Caterpillar in particular seems to be a big beneficiary, and GM also has been helped by the big jump in Chinese auto sales. Areddy and Aeffel wrote:

China’s efforts to quickly pump up its economy are providing a much-needed boost for U.S. businesses as well ... A growing number of companies, from tire and excavator makers to fast-food chains, are benefiting from China’s $585 billion stimulus program

Fair enough. But the article lacked one key bit of context. The last available US data (for January and February combined) indicates that US exports to China are down 24% y/y. The US data is a bit dated by now, as there are signs that China’s economy picked up in March, April and May (after what I think was an exceptionally sharp deceleration in the fourth quarter). But until there is evidence that China is importing more not less -- and evidence that China’s trade surplus is falling -- it is pretty hard to argue that China is supporting global demand. The data showing the y/y change in US exports to China - which admittedly only runs through February --isn’t exactly encouraging. 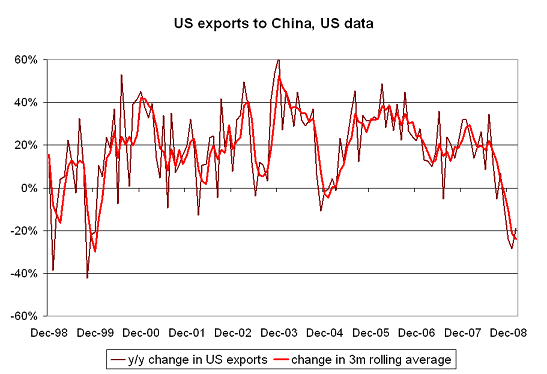 Anecdotes are best when they tell a story that is grounded in the actual trade data. Reporting on turning points is hard. But it is important to note that China’s stimulus has yet to really register in either its import data -- or in data showing the world’s exports to China.

Too much of a good thing? Should global capital flows be pumped back up to their boom levels?

Kidnapping in Nigeria: A Growth Industry