The New York Times has a front-page story today on how U.S. foreign aid programs face major budget cuts. Why the Times chose today to run the story is anyone’s guess. The gloomy budgetary picture for foreign aid has been obvious for months. So while the story doesn’t break any news, it comes with nice charts. And as the saying goes, a picture is worth a thousand words.

Three big points. First, foreign aid spending today is higher when measured in real (or inflation-adjusted) dollars than it was during much of the 1980s and 1990s. That is because foreign aid budgets were slashed under Bill Clinton and grew substantially under George W. Bush. (Yes, a Republican president was good for foreign aid, a Democratic one not so much.)

Second, foreign aid has fallen as a share of the federal budget over the last three decades. So while spending on foreign aid has grown in absolute terms it has declined in relative terms. 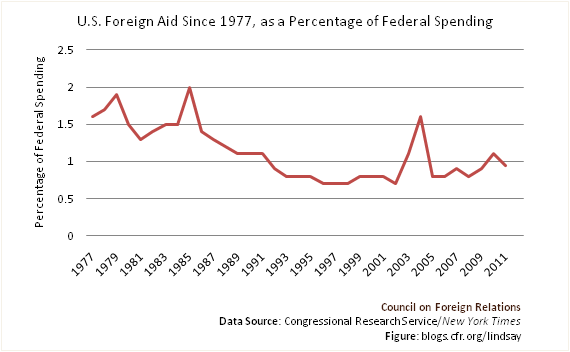 Third, the White House will be lucky to hold foreign aid spending flat in 2012. Even the Democratically controlled Senate wants to cut its request. 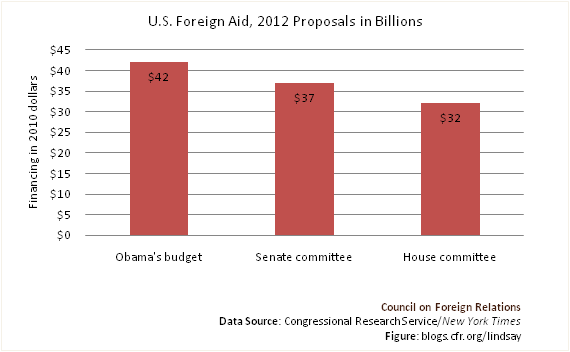 The looming cuts to the foreign aid budget will prompt a lot of hand wringing, much of it justified. We will see a spate of op-eds extolling the strategic benefits of foreign aid, and the White House will likely ask military officials to help make the case for foreign aid as a way to prevent problems and take pressure off the military.

This outcry won’t have much effect, for a reason apparent in the story the Times article tells about Representative Kay Granger (R-TX), Chair of the House Foreign Operations Subcommittee, which oversees the foreign aid budget:

She recalled a State Department envoy’s informing her of $250 million in relief to Pakistan after last year’s devastating floods. “I said I think that’s bad policy and bad politics,” she said in an interview at her office on Capitol Hill. “What are you going to say to people in the United States who are having flooding?”

In short, for voters, problems around here trump problems over there. So the U.S. Government will end up doing less with less.